Weapons of Math Destruction« an older post
a newer one »I am Number Four
Book Notes kitt decided around 22:42 on 3 May 2018 to publish this: 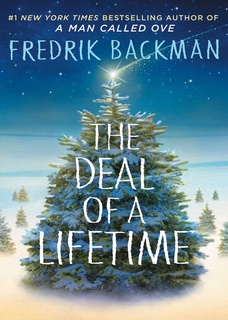 This is the book you read to pad your reading statistics. Not really kidding, as the book is short and half of it is the first two chapters of Beartown.

Mom suggested this book to me. I enjoyed A Man Called Ove, and Beartown was a hard but good read. This one, she said, was a "nice story."

It's a nice story.

Babbit got scared sometimes, and then it got to sit on the red chair. It might not be clinically proven that sitting on a red chair makes you less scared, but Babbit didn’t know that.
Location 41

I was born here but I’ve never gotten used to it; Helsingborg and I will never find peace. Maybe everyone feels that way about their hometown: the place we’re from never apologizes, never admits that it was wrong about us. It just sits there, at the end of the motorway, whispering: “You might be all rich and powerful now. And maybe you do come home with expensive watches and fancy clothes. But you can’t fool me, because I know who you really are.
Location 52

And sometimes the hometown doesn't remember who you are because you have become more than you were as a child.

It wasn’t the car crash that brought me to the hospital, I was there long before that. Cancer. I’d met the girl for the first time six days earlier, when I was smoking on the fire escape so the nurses wouldn’t see me. They went on and on about smoking, as though it would have time to kill me.
Location 63

I know what you’re thinking: what a bastard I am. And you’re right. But the vast majority of successful people don’t become bastards, we were bastards long before. That’s why we’ve been successful.
Location 86

Every parent will take five minutes in the car outside the house from time to time, just sitting there. Just breathing and gathering the strength to head back inside to all of their responsibilities. The suffocating expectation of being good, coping. Every parent will take ten seconds in the stairwell occasionally, key in hand, not putting it in the lock. I was honest, I only waited a moment before I ran.
Location 105

You’re your mother’s son. She was smarter than me, I never quite forgave her for that.
Location 126

“Are you brave too?”

“Everyone always says I’m so brave.” Her eyelids fluttered.

So I replied honestly: “Don’t be brave. If you’re scared, be scared. All survivors are.”
Location 137

You see history, I see development, you see nostalgia, I see weakness.
Location 174

You were always someone who could be happy. You don’t know how much of a blessing that is.
Location 177

Weak people always look at people like me and say, “He’s rich, but is he happy?” As though that was a relevant measure of anything.
Location 214

Happy people don’t get obsessed, they don’t devote their lives to curing illnesses or making planes take off. The happy leave nothing behind. They live for the sake of living, they’re only on earth as consumers.
Location 217

It’s bloody awful to admit to yourself that you’re not the kind of person you’ve always thought you were.
Location 246

“You never get your child’s attention back,” your mother once said. “The time when they don’t just listen to you to be nice, that time passes, it’s the first thing to go.”
Location 261

That’s what fathers do, they sit in front of their sons and tell their son’s stories to a third person rather than letting them speak for themselves.
Location 287

A second is always a second; that’s the one definitive value we have on earth. Everyone is always negotiating, all of the time. You’re doing the deal of your life, every day. This was mine.
Location 299

“I’m scared,” I admitted, but she shook her head.

“You’re not scared. You’re just grieving. No one tells you humans that your sorrow feels like fear.”

“What are we grieving?”