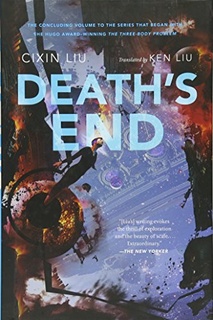 The main elements of deterrence are these: the deterrer and the deteree (in dark forest deterrence, humanity and Trisolaris); the threat (broadcasting the location of Trisolaris so as to ensure the destruction of both worlds); the controller (the person or organization holding the broadcast switch); and the goal (forcing Trisolaris to abandon its invasion plan and to share technology with humanity). When the deterrent is the complete destruction of both the deterrer and the deteree, the system is said to be in a state of ultimate deterrence. Compared to other types of deterrence, ultimate deterrence is distinguished by the fact that, should deterrence fail, carrying out the threat would be of no benefit to the deterrer.
Page 129

First, being declared a savior was just like being pushed under the guillotine: There was no choice involved.
Page 145

But the greatest danger was the prospect of loss of social order. In the resettlement zones, the hyper-information society disappeared. Newcomers poked the walls, bedside stands, or even their own clothes until they realized that everything was dead, un-networked. Even basic communications could not be guaranteed. People could obtain news about the world only through very limited channels. For a population used to a super-networked world full of information, it was as if they had all gone blind.
Page 201

This totally cracked me up when I read it. I can just imagine people poking the walls, and all the surfaces, trying to interact with them, when they clearly cannot.

The society of resettled populations transformed in profound ways. People realized that, on this crowded, hungry continent, democracy was more terrifying than despotism. Everyone yearned for order and a strong government. The existing social order broke down. All the people cared about was that the government would bring them food, water, and enough space for a bed; nothing else mattered. Gradually, the society of the resettled succumbed to the seduction of totalitarianism, like the surface of a lake caught in a cold spell. Sophon’s words after she killed those people at the food distribution center—“ The era for humanity’s degenerate freedom is over”— became a common slogan, and discarded dregs from the history of ideas, including fascism, crawled out of their tombs to the surface and became mainstream. The power of religions also recovered, and people gathered into different faiths and churches. Thus, theocracy, a zombie even more ancient than totalitarianism, reanimated itself.
Page 208

People being people, I believe this is what would happen. That belief saddens me.

“Vengeance against Trisolaris is our right. They must pay for the crimes they’ve committed. In war, it is right and just to destroy one’s enemies.
Page 235

Perverted ideas about the safety notice also led to vicious acts of terrorism. Some “anti-intellect” organizations were formed to put into practice the proposal to lower human intelligence. One of these planned to add large quantities of “neural suppressors” to the water supply of New York City, which would have caused permanent brain damage. Fortunately, the plot was uncovered in time and no harm was done, though NYC’s water supply was out of commission for a few hours. Of course, without exception, these “anti-intellect” organizations wanted to maintain the intelligence of their own members, arguing that they had the responsibility to be the last of the intelligent people so that they could complete the creation of a society of low-intelligence humans and direct its operation.
Page 284

And again, I can believe this, too. People suck.

Faced with the omnipresent threat of death and the lure of a different state of existence, religion once again took center stage in social life.
Page 284

The main purpose of religion is to comfort. Faced with the omnipresent threat of death, of course a person would turn to religion.

Like a moody child, human society’s attitude toward Blue Space, which had already vanished in the depths of space, transformed again. From an angel of salvation, this ship again turned into a ship of darkness, a ship of devils. It had hijacked Gravity and cast a sinful spell of destruction on two worlds. Its crimes were unforgivable. It was Satan in the flesh. Sophon’s worshippers also pleaded for the Trisolaran Fleet to find and destroy the two ships, to safeguard justice and the dignity of the Lord. As with their other prayers, Sophon did not respond.
Page 286

Individuals may be strong, but people as a whole aren't. They are swayed by the loudest voice.

In actuality, the Earth dangled over a sea of death. Rationally, everyone understood this, and the ugly fights that broke out during the false alarm were nothing more than meaningless mass madness driven by a survival instinct that overwhelmed rational thinking.
Page 398

“What have you discovered?”

Intuitions work because of a lifetime of training that gives you the ability to make connections where inexperienced people can't. That said, ghosts don't exist.

“Don’t be arrogant. Weakness and ignorance are not barriers to survival, but arrogance is. Remember the droplet!”
Page 492

Civilization was like a mad dash that lasted five thousand years. Progress begot more progress; countless miracles gave birth to more miracles; humankind seemed to possess the power of gods; but in the end, the real power was wielded by time. Leaving behind a mark was tougher than creating a world. At the end of civilization, all they could do was the same thing they had done in the distant past, when humanity was but a babe:

And even that rock didn't survive.

“Look at that ship! How is it able to accelerate so fast?” a woman screamed.

“Oh! The people inside must have been crushed into meat pies,” a man said.

Another man spoke up. “You idiots. The ship itself would be crushed under that kind of acceleration. But look at it: It’s perfectly fine. That’s not a fusion drive, but something entirely different.”

“The rumors were true, then. They were building secret lightspeed ships so that they could escape.…”

“Hey, any ships ahead? Stop that ship! Crash into it. No one should live if we all have to die!”

“They can reach escape velocity! They can run away and live! Ahhhh! I want the lightspeed ship! Stop them; stop them and kill everyone inside!”
Page 533

If I can't have it, no one can - an incredibly human reaction.

“I know you’re not afraid. I just want to tell you something in case we don’t … I know about your experience as the Swordholder. I want to let you know that you didn’t do anything wrong. Humanity chose you, which meant they chose to treat life and everything else with love, even if they had to pay a great price. You fulfilled the wish of the world, carried out their values, and executed their choice. You really didn’t do anything wrong.”
Page 570

Okay, I understand what the author is trying to say here, I really do. But, she doomed the planet and killed mankind. She did do wrong.

“I don’t know what happened to you after that, but you still didn’t do anything wrong. Love isn’t wrong. A single individual cannot destroy a world. If that world was doomed, then it was the result of the efforts of everyone, including those living and those who had already died.”
Page 571

Yifan looked somewhat puzzled by the black soil. “I feel that soilless cultivation tanks would be more suitable here.”

Yifan said, “The Solar System humans spilled their last drop of blood to stay with their land— well, save for two drops: you and AA. But what was the point? They didn’t last, and neither did their land. Hundreds of millions of years have passed in the great universe, and do you think anyone still remembers them? This obsession with home and land, this permanent adolescence where you’re no longer children but are afraid to leave home— this is the fundamental reason your race was annihilated. I am sorry if I’ve offended you, but it’s the truth.”
Page 587