My Grandmother Asked Me To Tell You She's Sorry« an older post
a newer one »A Universe From Nothing
Book Notes Instead of being asleep at 06:15 on 12 June 2018, kitt created this: 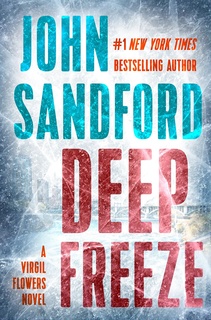 Virgil Flowers, Book 10, because, sure, why not?

Okay, I planned ahead.

Knowing I would be on a plane for eight hours, knowing that I am incapable of sleeping on a plane unless have the space of an entire row, knowing that once I was done with My Grandmother Asked Me to Tell You She's Sorry I wouldn't be in any mood to read something thoroughly brain-engaging, and knowing at that point I would have been up for 20 hours, I chose to bring this book along.

I'd been enjoying the Virgil Flowers series for what it is, a non-difficult, entertaining, quick read. This one did not disappoint. I did enjoy it, but recall my brain was, well, awake for many more hours than it was used to being awake, so grain of salt and all that.

This book lacks the previous books' bantering, only one reference to f---in' Flowers, and it didn't make me laugh out loud. I did enjoy that there were no Prey references, there was little of the girlfriend, and that Flowers seems to be as confused as pretty much anyone else would be, given the murder situation that he encountered.

The book is a quick read. It's not a great read, but if you're a fan of the series, or Sandford as a writer in general, keep reading. If you're not a fan of either, start with the first book to get a feel before getting this far.

“I’m not talking about religion. I’m talking about God,” Virgil said. “I’m a Lutheran minister’s kid, and, believe me, there’s a difference between a religion and God. I sorta cut out the middleman.”
Page 165

There wasn’t anything in particular, except awkward traces of the dead woman. It wasn’t the first time he’d been struck by the unexpected interruption of murder: you leave the wine bottles by the sink, thinking you’ll put them in the recycling in the morning, and a week later here they still are because you’re dead.
Page 199

“That’s not the entire point here,” Griffin said. “We don’t only want them to stop, we want people to see that they get punished."
Page 265