The Warded Man« an older post
a newer one »Daylight War
Book Notes Yeah, kitt finished writing this at 20:44 on 25 January 2017 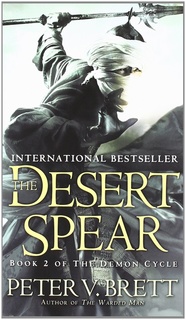 Book Two of the Demon Cycle, this book follows directly after The Warded Man, telling the story of Arlen, Leesha, and Rojer.

Except it isn't just their stories. Brett's style in this series appears to be continue the main story line of the three main characters, and also merge in the backstory of surrounding characters. I'll confirm when I read the next book, Daylight War. In this book's case, we follow Jardir's story, and I have to say, well, yawn.

Not a fan of the guy with delusions of power who attempted to murder Arlen. But, that's likely how it is supposed to be. Authors weave tales in specific ways so that the reader bonds with the "good guys" and jeers at the "bad guys." In this particular case, the bad guys believe that women are second class citizens, so, yeah, I really don't like the bad guys. We also meet Renna, whom I'm not a fan of either, so there's that.

Yeah, so, this book is about the Kaji side of the Thesan world, and moves the plot along a couple months while we learn Jardir's backstory. I'm not a fan of the first part of the book, but neither was Andy, so I'm okay with reading that part really fast to get to the parts I did enjoy. Even if, wtf, Leesha is with whom? Come on!