I Contain Multitudes« an older post
a newer one »Marked
Book Notes Yeah, kitt finished writing this at 18:35 on 20 July 2018 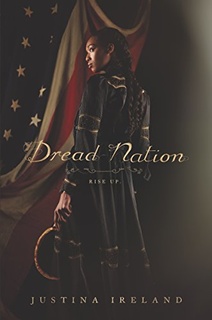 I had this book in my hold queue for a long time before I released it and it dropped into my read queue. I'm fairly certain it was on a Book Riot young adult book, but it has zombies in it, so, yeah, I read it.

This was a very fun read. The premise is that a zombie epidemic starts sometime during the Battle of Gettysburg, which lasted three days in our timeline, a different amount in the America of Dread Nation. The Civil War ended as the living now united against the dead. Except the attitudes and idiocy of the times didn't change, the slave owners still believed the slaves weren't people, still believed they were somehow entitled to subjugate another person, still believed in their own collective superiority. In this world, the ex-slaves and Native Americans were forced into combat schools, where they were trained to kill the dead.

Of course. Because once you have entitlement, you can't not have that entitlement until said entitle-ees are dead (typically of old age, tbh).

This was a fun read. Ireland portrays the prejudices well, gives us a heroine we can root for (root for, verb, informal, support or hope for the success of (a person or group entering a contest or undertaking a challenge): the whole of this club is rooting for him), and creates action and mystery at the same time. The letters to and from the heroine and her mother are heartbreaking in a way, but further the plot in a good way.

“What happened then?” I asked, because there’s nothing better than the memories of others when you’re little and have no stories of your own.
Location 75

I’ve heard enough political speeches to know that letting rich white city folk think that we’ve made even a small part of America safe again is a better stump speech than telling them that we’re still in trouble five years after the Army stopped fighting the dead.
Location 182

Momma used to tell me, “Deny it until they’ve got you dead to rights, sugar. If they can’t prove it, it never happened.” It’s good advice, and it’s served me well.
Location 240

But that’s the way life goes most of the time: the thing you least count on comes along and ruins everything else you got planned.
Location 341

The boy had always been a bully, and the thing about bullies is they never learn how to run like the rest of us do.
Location 492

In my head the ideas are so clear and make perfect sense, but when the words come out they’re a mess.
Location 534

I shrug. “Sometimes you have to live down to people’s expectations, Kate. If you can do that, you’ll get much further in life.
Location 679

That last bit is a lie, but the easiest lie to tell is the one people want to believe.
Location 879

But when you think of shamblers as things, as mindless creatures who have to be put down so that we might live, ending them gets to be a lot easier. The farmer doesn’t cry over slaughtering a hog.
Location 891

“Jane, your point is well taken, but heroism means little when it rests on lawlessness."
Location 982

Miss Preston was convinced that the best way to correct minor misconduct was a little drudgery, and housework was the pinnacle of drudge.
Location 997

Still, the thought of them together is enough to make me more than a little stabby. Jealousy is a terrible thing, and I swallow the emotion down hard as I can.
Location 1083

That’s the way it is when you fancy someone. Your heart starts doing the thinking, and your brain? Well, it gets left out of the equation until too late.
nnnnnLocation 1086

There was a big scary world beyond the boundaries of Rose Hill. I was bold, but not so foolhardy as to think there was something worthwhile on the other side of the barrier fence that kept the dead out.
Location 1106

And if folks could overlook the rumors of a white woman birthing a Negro, well, they could forgive just about anything, couldn’t they?
Location 1468

In Rachel’s mind, every ill that befell her was the work of someone else.
Location 1473

One of the other aunties, Auntie Eliza, once told me it was because Rachel was the major’s favorite before he went to war, and she liked the easy life he gave her. Rachel had adjusted to being owned, to being property, and she didn’t like the new situation, where she wasn’t nothing but a house servant with wages, a servant that had to work just as hard as everyone else.
Location 1480

It’s a question I’ve refused to ask myself. I don’t want to think about what it would do to my world if Momma is dead.
Location 1685

I get an uncomfortable feeling like I’m sliding backward down a slope into a deep hole that I dug my own self.
Location 1739

"... That’s how men like the mayor maintained control. You believe strongly enough in an idea, nothing else much matters.”
Location 2005

I reckon we all have our childhood scars, whether we wear them on the outside or not.
Location 2172

“Look at you, with those pretty manners. Wherever did they find you?”

“At the junction of hard luck and bad times,” I answer. It’s something that my momma says.
Location 2438

But that means backing down from Cora, and I’ve seen her kind. She’ll do everything the people in charge tell her to, even if that means she ends up broken and bloody. She’s one of those people that never learned to breathe, never understood the true meaning of freedom. She’s a dog, happy even with a cruel master. She eats her three squares and takes her bit of pocket change and happily wears the collar around her throat, because that’s enough for her. But it ain’t for me.
Location 2931

A bark of laughter escapes from her. “Here you are flayed within an inch of your life and you’re asking after me.”

I sigh. “Sometimes it’s easier to think about other folks’ small hurts than your big ones.”
Location 3396

“You shouldn’t jump to conclusions about people, Mr. Gideon. I contain multitudes.”
Location 3455

I laughed at this one, well, because.

But I can’t change the past; I can only push headlong into an uncertain future. “Kate,”
Location 3909

Momma used to say there were lots of ways to survive. Don’t be afraid to pretend to be something you aren’t, Jane. Sometimes a little subterfuge and chicanery is in order and the quickest way to achieve one’s goal. It ain’t hard to imagine Ida pretending to be just another dumb colored girl in order to make it out here. Survival by any means necessary.
Location 3976

I’ve learned a lot in the past few years. Including that a group of panicked people ain’t that different from a herd of sheep. Nip at their heels a little and they’ll go wherever you tell them to.
Location 4060

Here’s a thing about me: I regret most of my actions five minutes after the fact. I’m rash in my decisions and I spend half my time trying to extricate myself from situations of my own making.
Location 4183

Alan’s jaw tightens and he looks straight ahead. “It was mostly the colored folks that fought the shamblers. No surprise there. Government pays to send them to those fancy schools while real men like me are left to fend for ourselves.”
Location 4333

So, in this story, Alan is a white guy. He believe that forced slavery of black people into killing zombies, which included forcing them into a re-education system which enabled them to be effective at killing zombies, was "fancy schools."

“It matters not, my dear. It is God’s wrath for our sins.” The sheriff lights his cigarette and looks out at the horizon. “The dead never walked until brother fought brother. Until we penitent folk betrayed one another.”
Location 4375

I wouldn't be surprised if this happened, too, in a zombie outbreak. It's about power and control in a fear-laden world.

I didn’t like the big girl, I ain’t never been a fan of snitches, but turning shambler is not a fate I’d wish on anyone, not even the girl who got me whipped.
Location 4394

Well, except for the guy she was planning on killing. Not the point.

“See, the problem in this world ain’t sinners, or even the dead. It is men who will step on anyone who stands in the way of their pursuit of power."
Location 4586