Chimera« an older post
a newer one »Blood Rites
Book Notes Instead of being asleep at 14:24 on 5 May 2017, kitt created this: 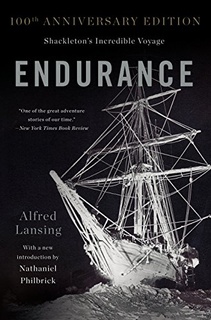 I've read this book at least twice before, possibly more. It was originally handed to me by Jamie Fenner (so I can date the first reading to 1997), and I've recommended it to many people to read. I'll go ahead and say now, this book is on the amazing, "let me buy you a copy" part of my book review scale.

The full title of this book is "Endurance: Shackleton's Incredible Voyage" if you're going to look for it in the library or bookstore.

In mid-1914, Ernest Shackleton and his crew set sail on the Endurance on their way to Antarctica, with the intent of crossing the continent on foot. Along the way, the Endurance is trapped in ice sheets, and is eventually crushed, forcing the crew to disembark, save as many of the supplies as possible, and survive until they are rescued.

Except, this is before radio were commonplace. Before the technology we rely on to save us (satellites, phones, GPS, etc.) even existed. To be rescued, the crew pretty much had to go help themselves.

I'm not revealing anything by commenting EVERYONE LIVES, but holy moly is the story amazing. And nearly unbelievable. That you don't have a boatload of unemotional machines means there's the whole list of human problems, interactions, struggles, and successes.

The story reads quickly, and wow, I just love it.

And my warm bed.

Outside this planking, to keep her from being chafed by the ice, there was a sheathing from stem to stern of greenheart, a wood so heavy it weighs more than solid iron and so tough that it cannot be worked with ordinary tools.
Page 18

I am developing a fascination with greenheart wood as we speak.

The conversion of the Endurance from a ship into a kind of floating shore station brought with it a marked slowdown in the tempo of life. There simply wasn’t much for the men to do. The winter schedule required of them only about three hours’ work a day, and the rest of the time they were free to do what they wanted.
Page 40

And here is where one has to consider what they did with their days.

It was remarkable that there were not more cases of friction among the men, especially after the Antarctic night set in. The gathering darkness and the unpredictable weather limited their activities to an ever-constricting area around the ship. There was very little to occupy them, and they were in closer contact with one another than ever. But instead of getting on each other’s nerves, the entire party seemed to become more close-knit.
Page 50

I find this fascinating. It also plays a large part in my increasing love of this book and the whole tale. In adverse conditions, humans are at their worst. And sometimes their best. Experienced trademen succeed when they do what needs to be done, and this seems to be the philosophy of the crew. Doesn't matter if you like it or not, if it needs to be done, you do it.

A large part of the book talks about how the crew managed to stay a relatively cohesive unit, despite the long, cold days. Incredibly fascinating.

Though Hurley was a skilled photographer and an excellent worker, he was also the sort of man who responded best to flattery, who frequently needed to be jollied along and made to feel important. Shackleton sensed this need—he may even have overestimated it—and he was afraid that unless he catered to it, Hurley might feel slighted and possibly spread discontent among the others.
Page 90

More insights into human nature, and how good leaders understand, adapt to it.

In some ways they had come to know themselves better. In this lonely world of ice and emptiness, they had achieved at least a limited kind of contentment. They had been tested and found not wanting.

They thought of home, naturally, but there was no burning desire to be in civilization for its own sake.
Page 103

Until the march from Ocean Camp they had nurtured in the backs of their minds the attitude Shackleton strove so unceasingly to imbue them with, a basic faith in themselves—that they could, if need be, pit their strength and their determination against any obstacle—and somehow overcome it.
Page 117

But the fundamental, underlying factor in these discussions was that, for many men, the dogs were more than so many pounds of pulling power on the trail; there was a deep emotional attachment involved. It was the basic human need to love something, the desire to express tenderness in this barren place. Though the dogs were vicious, surly beasts with one another, their devotion and loyalty toward the men was above question. And the men responded with an affection greatly surpassing anything they would have felt under ordinary circumstances.
Page 120

And all the defenses they had so carefully constructed to prevent hope from entering their minds collapsed. Macklin, who had consistently struggled to remain hard-headedly pessimistic, found it impossible to hold out any longer.
Page 136

“It certainly looks promising.” But then he added: “Hope tells a flattering tale.”
Page 145

Wild launched into a series of stories about his past escapades involving ladies, and McIlroy lived up to his reputation as the most cosmopolitan member of the expedition by explaining to an attentive audience his recipe for mixing several cocktails, including one guaranteed aphrodisiac called “The Bosom Caresser.”
Page 145

Even after the men were out of their tents, there was confusion about exactly what was the trouble and where the danger was. They groped their way around in the dark, bumping into one another and stumbling into unseen holes in the ice.
Page 146

For the most part, we in modern times don't understand the dark. We don't have the collective experience for just how black the night is without a moon. We don't understand how dangerous moving quickly in the complete dark can be.

Shackleton had already made up his mind, after long discussions with Wild, not only as to who should be taken, but who should not be left behind.
...
And Shackleton was not sure that Crean’s rough, tactless nature would lend itself well to a period of enforced and perhaps long waiting.
...
But both Shackleton and Wild felt that [McNeish] was still a potential troublemaker and not a good man to be left behind.
Page 193

And this is what a leader does: understands the nuances of a team, plays to its strengths, and minimizes its weaknesses.

enemy. Unlike the land, where courage and the simple will to endure can often see a man through, the struggle against the sea is an act of physical combat, and there is no escape. It is a battle against a tireless enemy in which man never actually wins; the most that he can hope for is not to be defeated.

Instead, life was reckoned in periods of a few hours, or possibly only a few minutes—an endless succession of trials leading to deliverance from the particular hell of the moment.
Page 230

Over and over again, a thousand times each day, this drama was re-enacted. Before long, to the men on board the Caird, it lost all elements of awesomeness and they found it routine and commonplace instead, as a group of people may become inured to the perils of living in the shadow of an active volcano.
Page 229

They're in a tiny boat. The boat is going up and over waves that tower fifty feet above them, able to crash a hundred million tons of water on them every surge, and they become used to it.

They had been the underdog, fit only to endure the punishment inflicted on them.

But sufficiently provoked, there is hardly a creature on God’s earth that ultimately won’t turn and attempt to fight, regardless of the odds. In an unspoken sense, that was much the way they felt now. They were possessed by an angry determination to see the journey through—no matter what.
Page 239