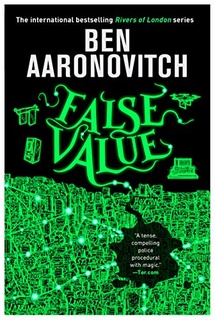 This is book 8 of the Peter Grant series, and I'm once again only pretty sure I have that order correct.

I have to say, the opening of this book was REALLY confusing, along with the first couple chapters. After the background started filling in, with conversations and flashbacks, the book began to make more sense, and my general discomfort of being confused dissipated.

Here we start out with Peter, having gotten in a row with the uppers at work, starting off as a security inspector for an interesting computer company working on AI. Not out of the realm of possibility, unusual, but not unreasonable as a character development. Then backstory and flashbacks and, oh, okay.

I really enjoyed how much of the computer stuff was accurate. None of the "hook up a small LED monitor to two wires outside of a bank vault pin-pad, and let them cycle until they have the password" kind of BS one normally sees in computer portrayals. I mean, if I'm already suspending disbelief with the whole magic thing, don't jar me out of reality with bad computer talk. Turns out, Aaronovitch didn't, and I appreciate it.

The storyline had a nice balance between home life, current plot, flashbacks, and history.

I recommend reading the books in order, definitely worth reading if you're committed to the series already. I don't recommend starting with this one. It wouldn't be as delightful as an introduction to Peter Grant.

"Nobody’s going to fall for this," I said.

"Of course they will," said Silver. "They fall for Nigerian princes all the time."

"Stupid people do," I said.

"Wrong," said Silver. "It doesn’t matter if you’re a leading astrophysicist or thicker than a bag full of bricks. Whether the mark falls for a scam depends on experience, knowledge and how much they want it to be true."
Page 90

"I’ve got to ask," said Stacy. "Peter’s a nice enough lad. But, be honest, what is it in him that attracts you?"

Beverley gave me a sly smile. "He’s a world - class shagger," she said. Stacy grinned and Oliver looked at me wide-eyed. "No, I mean it," said Beverley. "Olympic standard shagging. Morning, noon and night. I knew it as soon as I saw him the first time. That man, I thought, will go like a dredger at high tide."

I giggled at this exchange.

As the one whose delicate brown body was in the firing line, I was a little bit more cautious. People are often short-sighted and stupid, right up to the point where they’re fucking perceptive — that point usually being the most inconvenient moment possible. And people don’t like to think they’ve been taken — and they tend to express their displeasure forcibly.
Page 122

"He quoted Vasily Zhukovsky at me," said Beverley.

"Russian Romantic poet," she said, and admitted that she’d had to look him up afterward. He’d quoted in Russian, too, but Beverley reckoned she’d got the gist. "Something about accepting your destiny."
Page 132

"Do you love me?" she asked, and I felt a sudden unexpected rush of panic at the question.

It took me so by surprise that I practically stuttered the answer. "Yes," I managed.

Because pheromones, because beauty, because laughter and joy when she was near and loss and emptiness when she was gone. Because of shouting at unicorns and braving faeries. The way her brow furrowed when she was reading something tricky in a textbook. The smell and feel of her skin. The warmth of her body, the sunshine of her smile and the thrilling depths of her eyes.
Page 178

Sunday morning by instant tradition was study morning so, after I’d oiled the Bulge — which always made Beverley giggle — I cracked open my Blackstone’s manuals, bought second - hand for economy, while she lay on her back in the living room and read papers off her Kindle. Every so often, one or other of us would sigh and decide it was time for yet another cup of coffee.
Page 182

There were no council CCTV cameras covering the High Street and, quelle surprise, all of the privately owned cameras that might have had the Print Shop in view were inoperable or didn’t keep their image data for more than a week.
Page 204

Having confirmed the presence of the Mary Engine and the Rose Jars, it was time for my sudden but inevitable betrayal.
Page 224

Oh, so giggling at the Firefly reference! Joy!

I paused to make sure she was following my logic. You can be too clever during an interview and a common tactic for interviewees is to zone out and stop listening.
Page 256