The Mars Room« an older post
a newer one »Lost Connections
Book Notes Yeah, kitt finished writing this at 16:43 on 11 November 2018 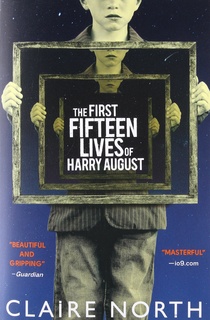 I really liked and enjoyed this book. I hadn't read anything by Claire North, yet she joins the surprisingly large number of authors who have books I want to read, but I read a different book by the author instead.

I'm glad I did. This was such a fun read.

Harry August was born in 1919, died in 1989, and was born in 1919 to live his life over again. Given the era of his childhood and his death being three years before the release of the film Groundhog Day, it isn't surprising that the second time through, he pretty much did what most people would do: went insane. The third time through, though, hey, wait a moment.

Honestly, if I had a chance to redo life with all my memories of the previous life / lives, I would be so f'ing full of "HOT DAMN!" I'd likely be labeled insane from giddism. Is that a word? Is now.

I'd probably start to worry about the boredom of never dying sometime past the thirty or fortieth time through. Pretty sure I'd be able to figure out how not to come back when I was truly and goodly done.

I'd also hide immediately, along the lines of the Remembrance of Earth's Past idea that there's likely someone more powerful out there with greater skills, best stay hidden. Or was that After On and being the first sentient computer?

Anyway. Harry. We lurves the Harry.

I had spent an entire life praying for a miracle, and none had come. And now I looked at the stuffy chapel of my ancestors and saw vanity and greed, heard the call to prayer and thought of power, smelled incense and wondered at the waste of it all.
Page 19

I asked if it was hard, being the first woman in her department. She laughed and said that only idiots judged her for being a woman – and she judged them for being idiots. “The benefit being,” she explained, “that I can be both a woman and a fucking brilliant surgeon, but they’ll always only be idiots.”
Page 33

They say that the mind cannot remember pain; I say it barely matters, for even if the physical sensation is lost, our recollection of the terror that surrounds it is perfect.
Page 36

Time is not wisdom; wisdom is not intellect. I am still capable of being overwhelmed; he overwhelmed me.
Page 40

I told him to study the Great Game, to research the Pashtun, look at a map.
Page 44

Oooooo! I know this reference! Thanks, Moazam!

I was out of shape, having never been in much of a shape to get out of, and my confinement had hardly aided the process.
Page 57

“I am honoured. But if your complaint is that ethics have no place in pure science, I’m afraid I must be forced to disagree with you.”

“Of course they don’t! Pure science is no more and no less than the logical process of deduction and experimentation upon observable events. It has no good or bad about it, merely right or wrong in a strictly mathematical definition. What people do with that science is cause for ethical debate, but it is not for the true scientist to concern themselves with that. Leave it to the politicians and philosophers.”
Page 70

“You can’t say you’re not expecting to achieve a thing, then express resentment that others agree with you.”
Page 72

Cancer is a process on which the healthy cannot impose.
Page 89

Private Harry Brookes poured his heart out to a distant stranger who made no reply, but I knew that what I needed was not so much the comfort of return, but to speak of what I had been. The telling was all, the reply merely a courtesy.
Page 89

"I was bleeding out of my insides I stood there and said, ‘I am a daughter of this beautiful land, and I will never participate in the ugliness of your regime!’ And when they shot me, it was the most magnificent I had ever been."
Page 151

Blackmail is surprisingly difficult to pull off. The art lies in convincing the target that whatever harm they do themselves – for, by definition, you are compelling them rather than coaxing them into obedience – is less than the harm which will be caused by the revelation of the secrets in your power.

More often than not the blackmailer overplays their hand, and nothing is achieved except grief. A light touch and, more importantly, an understanding of when to back away is vital to achieve success.
Page 153

Short of a society where religion obligated modesty, a Russian winter could do wonders for thwarting facial recognition.
Page 155

"I don’t understand what drives you. You have wealth, time and the world at your feet, but all you do is push, push and keep on pushing at things which really don’t bother you."
Page 162

In truth, my own words rang hollow in my ears. I spoke fine sentiments about participation in the world around us, and yet what was my participation to be?
Page 162

“Linears only have one life,” she said at last, “and they don’t bother to change anything. It’s just not convenient. Some do. Some… ‘great’ men, or angry men, or men that have been beaten so low that all they have left to do is fight back and change the world. But, Harry, if there is one feature most common to ‘great’ men, it’s that they’re nearly always alone.”
Page 163

“Only one thing surprises me any more,” she explained, “and that’s the things people admit when they’re pissed.”
Page 163

I spent the long waiting hours sitting in the silence and the dark, reproaching myself for my lack of self-reproach. A self-defeating exercise, but even when the logical absurdity of my own thought processes became apparent to me, I was rather annoyed that even this slim manifestation of conscience was so intellectual.
Page 165

Rationality, if not intellect, can still overwhelm alcohol when death is on the line.
Page 166

Problem is, you’ve gone soft. You’ve got used to the comfy life, and the great thing about the comfy life is no one who has it is ever gonna risk rocking the boat. You should learn to live a little, rough it out –I’m telling you, there’s no greater high.”
Page 216

Knowledge is not a substitute for ingenuity, merely an accelerant.
Page 224

In another time, I felt, I would have enjoyed Soviet Dave’s company, and wondered just what stories lurked behind his polite veneer, to have made him a security man.
Page 226

I waited with the light out in my room for the dead hour of the night when the mind shifts into a numb, timeless daze of voiceless thought.
Page 228

The secret to being unafraid of the darkness is to challenge the darkness to fear you, to raise your eyes sharp to those few souls who stagger by, daring them to believe that you are not, in fact, more frightening than they are.
Page 228

The doctrine I spouted was, in fact, absolutely correct for the times we lived in, but I had underestimated how quickly the times changed and, vitally, how much more important the interpretations of rivals were than the truth of what you said.
Page 291

No one ever considers the question of bladder when dealing with matters of subterfuge.
Page 296

Or when writing fiction...

Armies tend to exploit science faster than civilians, if only because their need tends to be more urgent.
Page 322

I also believe that single-minded dedication to just one thing, without rest, respite or distraction, is only conducive to migraines, not productivity.
Page 345

She was an Indian mystic, one of the first to realise that the most profitable way to be enlightened was to spread her enlightenment to concerned Westerners who hadn’t had enough cultural opportunities to nurture their cynicism.
Page 385