The Thirst« an older post
a newer one »The Murder of Roger Ackroyd
Book Notes Yeah, kitt finished writing this at 21:59 on 12 June 2019 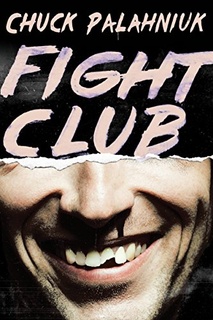 Okay, everyone knows the movie.

Not everyone knows the movie was a book. The afterword in the book confirms this.

I had read recently about how Palahniuk's financial advisors had pretty much swindled him out of his earnings from this book ($6000 advance, according to the afterword!), and that, well, he had taken a startling Classical Stoic view on the whole thing. Maybe my purchasing of the book (twice, actually, to my surprise) will help in some small way.

The Narrator is living a typical American life, everything is normal, and he feels empty. He starts going to support groups to feel alive.

I loved the support groups so much, if people thought you were dying, they gave you their full attention. If this might be the last time they saw you, they really saw you. Everything else about their checkbook balance and radio songs and messy hair went out the window. You had their full attention. People listened instead of just waiting for their turn to speak. And when they spoke, they weren’t telling you a story. When the two of you talked, you were building something, and afterward you were both different than before.
Page: 107

Eventually he meets up with Tyler Durden, who is pretty much the asshole every guy wants permission to be. The narrator's life begins to unravel. Said narrator doesn't care much, because Tyler is there to carry him along.

Pretty much anyone who is a fan of the movie should read the book. I can't say I'm a huge fan of Palahniuk's writing style, or even a minor one, so I'm unlikely to read another book of his any time soon, but this one was worth reading if you are a fan.

I just don’t want to die without a few scars, I say. It’s nothing anymore to have a beautiful stock body. You see those cars that are completely stock cherry, right out of a dealer’s showroom in 1955, I always think, what a waste.
Page: 48

It used to be enough that when I came home angry and knowing that my life wasn’t toeing my five-year plan, I could clean my condominium or detail my car. Someday I’d be dead without a scar and there would be a really nice condo and car. Really, really nice, until the dust settled or the next owner. Nothing is static.
Page: 49

Ever since college, I make friends. They get married. I lose friends. Fine.
Page: 62

"You know, the condom is the glass slipper of our generation. You slip it on when you meet a stranger. You dance all night, then you throw it away. The condom, I mean. Not the stranger.”
Page: 66

Marla tells me how in the wild you don’t see old animals because as soon as they age, animals die. If they get sick or slow down, something stronger kills them. Animals aren’t meant to get old. Marla lies down on her bed and undoes the tie on her bathrobe, and says our culture has made death something wrong. Old animals should be an unnatural exception. Freaks.
Page: 103

Cancer will be like that, I tell Marla. There will be mistakes, and maybe the point is not to forget the rest of yourself if one little part might go bad.
Page: 105

There are a lot of things we don’t want to know about the people we love.
Page: 106

By this time next week, each guy on the Assault Committee has to pick a fight where he won’t come out a hero. And not in fight club. This is harder than it sounds. A man on the street will do anything not to fight.
Page: 119

The goal was to teach each man in the project that he had the power to control history. We, each of us, can take control of the world.
Page: 122

"You have a class of young strong men and women, and they want to give their lives to something. Advertising has these people chasing cars and clothes they don’t need. Generations have been working in jobs they hate, just so they can buy what they don’t really need.
Page: 149