Mortality« an older post
a newer one »How to Work a Room
Book Notes Instead of being asleep at 04:27 on 4 April 2019, kitt created this: 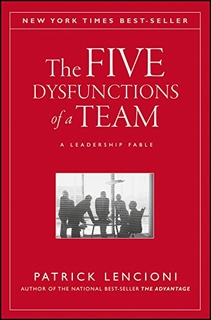 So what do you do when a newly incoming CEO recommends a book to the team? Well, duh, you read it.

What happens when the book he recommends has to do with dysfunctional teams? Well, duh, you read it.

What else happens? You are stunningly shocked (SHOCKED) at how relevant the book is, sadly unsurprised that you were unaware of all the problems with the team, and cautiously hopeful that things can be better. In other words, mine in fact, "Hoooboy, lots of it is relevant."

Okay, those five dysfunctions are:

1. Absence of trust
2. Fear of conflict
3. Lack of commitment
4. Avoidance of accountability
5. Inattention to results

The book is told as a tale, of a new CEO coming in and working with the leadership of a company. Most tales that have morals are stunningly contrived. This one, however, has this reader nodding a lot with, "Yep... yes... uh huh, yeah."

“Trust is the foundation of real teamwork. And so the first dysfunction is a failure on the part of team members to understand and open up to one another. And if that sounds touchy-feely, let me explain, because there is nothing soft about it. It is an absolutely critical part of building a team. In fact, it's probably the most critical.”
Page 43

“Great teams do not hold back with one another,” she said. “They are unafraid to air their dirty laundry. They admit their mistakes, their weaknesses, and their concerns without fear of reprisal.”
Page 44

The first dysfunction is an absence of trust among team members. Essentially, this stems from their unwillingness to be vulnerable within the group.
Page 188

the second dysfunction: fear of conflict. Teams that lack trust are incapable of engaging in unfiltered and passionate debate of ideas.
Page 188

the third dysfunction of a team: lack of commitment. Without having aired their opinions in the course of passionate and open debate, team members rarely, if ever, buy in and commit to decisions, though they may feign agreement during meetings.
Page 188

avoidance of accountability, the fourth dysfunction. Without committing to a clear plan of action, even the most focused and driven people often hesitate to call their peers on actions and behaviors that seem counterproductive to the good of the team.
Page 189

the fifth dysfunction can thrive. Inattention to results occurs when team members put their individual needs (such as ego, career development, or recognition) or even the needs of their divisions above the collective goals of the team.
Page 189

They trust one another. They engage in unfiltered conflict around ideas. They commit to decisions and plans of action. They hold one another accountable for delivering against those plans. They focus on the achievement of collective results.
Page 189

Members of Trusting Teams . . . Admit weaknesses and mistakes Ask for help Accept questions and input about their areas of responsibility Give one another the benefit of the doubt before arriving at a negative conclusion Take risks in offering feedback and assistance Appreciate and tap into one another's skills and experiences Focus time and energy on important issues, not politics Offer and accept apologies without hesitation Look forward to meetings and other opportunities to work as a group
Page 197

This low-risk exercise requires nothing more than going around the table during a meeting and having team members answer a short list of questions about themselves. Questions need not be overly sensitive in nature and might include the following: number of siblings, hometown, unique challenges of childhood, favorite hobbies, first job, and worst job. Simply by describing these relatively innocuous attributes or experiences, team members begin to relate to one another on a more personal basis, and see one another as human beings with life stories and interesting backgrounds.
Page 198

It requires team members to identify the single most important contribution that each of their peers makes to the team, as well as the one area that they must either improve upon or eliminate for the good of the team. All members then report their responses, focusing on one person at a time, usually beginning with the team leader.
Page 198

team leaders must create an environment that does not punish vulnerability. Even well-intentioned teams can subtly discourage trust by chastising one another for admissions of weakness or failure.
Page 201

All great relationships, the ones that last over time, require productive conflict in order to grow. This is true in marriage, parenthood, friendship, and certainly business.
Page 202

teams that engage in productive conflict know that the only purpose is to produce the best possible solution in the shortest period of time. They discuss and resolve issues more quickly and completely than others, and they emerge from heated debates with no residual feelings or collateral damage, but with an eagerness and readiness to take on the next important issue.
Page 202

When team members do not openly debate and disagree about important ideas, they often turn to back-channel personal attacks, which are far nastier and more harmful than any heated argument over issues.
Page 203

Mining Members of teams that tend to avoid conflict must occasionally assume the role of a “miner of conflict”—someone who extracts buried disagreements within the team and sheds the light of day on them. They must have the courage and confidence to call out sensitive issues and force team members to work through them. This requires a degree of objectivity during meetings and a commitment to staying with the conflict until it is resolved. Some teams may want to assign a member of the team to take on this responsibility during a given meeting or discussion.
Page 204

One of the most difficult challenges that a leader faces in promoting healthy conflict is the desire to protect members from harm.
Page 206

In the context of a team, commitment is a function of two things: clarity and buy-in. Great teams make clear and timely decisions and move forward with complete buy-in from every member of the team, even those who voted against the decision.
Page 207

The two greatest causes of the lack of commitment are the desire for consensus and the need for certainty: Consensus. Great teams understand the danger of seeking consensus, and find ways to achieve buy-in even when complete agreement is impossible. They understand that reasonable human beings do not need to get their way in order to support a decision, but only need to know that their opinions have been heard and considered.
Page 207

Certainty. Great teams also pride themselves on being able to unite behind decisions and commit to clear courses of action even when there is little assurance about whether the decision is correct.
Page 208

they understand the old military axiom that a decision is better than no decision.
Page 208

They also realize that it is better to make a decision boldly and be wrong—and then change direction with equal boldness—than it is to waffle.
Page 208

It is important to remember that conflict underlies the willingness to commit without perfect information. In many cases, teams have all the information they need, but it resides within the hearts and minds of the team itself and must be extracted through unfiltered debate.
Page 208

In order for teammates to call each other on their behaviors and actions, they must have a clear sense of what is expected. Even the most ardent believers in accountability usually balk at having to hold someone accountable for something that was never bought in to or made clear in the first place.
Page 212

this dysfunction is the unwillingness of team members to tolerate the interpersonal discomfort that accompanies calling a peer on his or her behavior and the more general tendency to avoid difficult conversations.
Page 212

team members who are particularly close to one another sometimes hesitate to hold one another accountable precisely because they fear jeopardizing a valuable personal relationship.
Page 213

the most effective and efficient means of maintaining high standards of performance on a team is peer pressure.
Page 213

A Team that Holds One Another Accountable . . . Ensures that poor performers feel pressure to improve Identifies potential problems quickly by questioning one another's approaches without hesitation Establishes respect among team members who are held to the same high standards Avoids excessive bureaucracy around performance management and corrective action
Page 214

The enemy of accountability is ambiguity, and even when a team has initially committed to a plan or a set of behavioral standards, it is important to keep those agreements in the open so that no one can easily ignore them.
Page 214

The ultimate dysfunction of a team is the tendency of members to care about something other than the collective goals of the group. An unrelenting focus on specific objectives and clearly defined outcomes is a requirement for any team that judges itself on performance.
Page 216

A Team that Focuses on Collective Results . . . Retains achievement-oriented employees Minimizes individualistic behavior Enjoys success and suffers failure acutely Benefits from individuals who subjugate their own goals/ interests for the good of the team Avoids distractions
Page 218

Ironically, teams succeed because they are exceedingly human.
Page 220