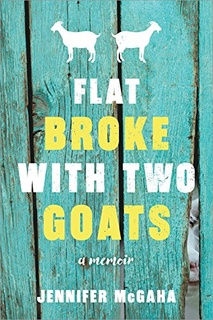 This book was a Libby app Big Read, where pretty much every library on Libby (might have been all of them, might have been only five, my sample size is small) offered the book to read or listen to, regardless of the number of copies the library actually had. It was billed as a worldwide book club, with this as The Book.

I thought, uh, okay, sure, why not. I'm trying to have a quarter of my books this year be non-fiction, and this is a memoir, so, okay. I checked it out from the library, then was surprised when it was auto-returned for me less than two weeks later. Turns out, that was a glitch, and the book was back in my reading queue a day later.

I read it today and was entertained. The book is the arc of a woman going from the "typical" American suburban (not really) housewife to a level of acceptance and enlightenment of the world. While there is some level of "ehhhhhhh, how could you not know?" McGaha does comment many times that, yeah, she should have known, should have done this or that, probably this and probably that.

Included in most chapters are recipes related to goats, who don't appear until the end of the book, and there are mreo than two of them, or the topic in the chapter. While most of recipes weren't particularly interesting to me, the presentation and story around them were amusing.

This isn't a book I would normally pick up, and wouldn't have read if it weren't blasted in my face every time I loaded Libby on my phone (which would be blasted in my face 3-4 times a day), but it was a fun read. If you're stuck on a desert island, you could read this one multiple times and still be entertained.

I would think back on those years at the Cape Cod house with a critic’s eye, dissecting every moment, looking for affirmation that I had, in fact, been a decent mother, that my kids had had happy childhoods.
Page 8

Maybe the other kids would be more ambitious than many of our peers had been. Maybe their ambition would rub off on our children.
Page 8

All those years of overspending, of thinking we would pay things off next month, next year, start a savings plan sometime in the future, finally caught up with us.
Page 9

And while what I should have learned from living a relatively privileged childhood was the value of hard work and frugality, what I learned instead was that money was not something with which I needed to be overly concerned.
Page 14

Welcome to America, this is what most people here are like.

It reminded me of my rootedness, of the deep and abiding knowledge that who I was was inextricably tied to where I was.
Page 116

It wasn’t fair, but I was angry, and I needed someone other than myself to blame for my unhappiness.
Page 161

When someone you love dies, that person comes to you in spurts, in bleeps and flashes you never see coming until they are there.
Page 200

If they found anything that met that criteria, they sent in a smaller helicopter, one that could get a closer view. An aerial search, apparently, did not require a warrant...
Page 241

“If you could go back to any age, any age at all,” I asked my grandmother on my forty-fourth birthday, “what age would you choose?”

“Fifty-five,” she said without hesitation. She was ninety years old then, and her answer surprised me then as it did now. Why not seventeen or twenty-five or thirty-two? Why, if you could go back, wouldn’t you go to a time when you had your whole life ahead of you, when you were young enough to alter the course of your future, to make better choices, be a better person?
Page 292

Years ago, we had had a fourteen-year-old corgi, Julie. She was very healthy and happy until a blood-borne disease left her needing repeated transfusions, a process our then-vet had encouraged. Never once did the vet suggest that we let her die peacefully, and never once did I consider that myself.

I had thought it was my duty to keep Julie alive, but the way she had finally died—in a cage at the vet’s office—had haunted me ever since.

After that, I came to believe that my role was not to keep my animals alive but to, when the inevitable time came, let them leave this world quietly and tranquilly, surrounded by people and animals who loved them.

It was, in fact, how I one day hoped to go, the very best death I could imagine.
Page 303

When you have gone through a sort of travesty of your own making, failure begins to feel like part of you. You get used to it. People around you expect you to fail, and you learn to expect it from yourself, to see it as almost comforting in its familiarity. You begin to believe you are destined to make a mess of things. But then there are those unexpected kindnesses, those moments when someone does something to make you believe that perhaps you are more than the sum of everything you have done wrong, that perhaps you are worth more than you think.
Page 309

Of course, we still owed the IRS a staggering amount that seemed no less insurmountable than it had four years ago. It was not cancer or heart disease or Alzheimer’s, yet it was something we both thought about every day, a bitter, pungent haze that hovered over our lives. We lived through it, around it, in spite of it, but we were always aware of its presence.
Page 331

... still wrestled with feelings of guilt and betrayal. Not one or the other, but both. Grief has a way of doing that — of forcing you to see everything more clearly.
Page 332