Storm Front (Harry Dresden)« an older post
a newer one »Children of Earth and Sky
Book Notes kitt decided around 12:18 on 22 October 2016 to publish this: 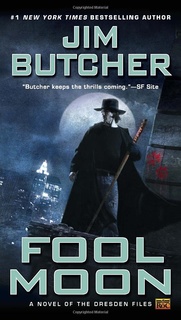 Okay, continuing in the "re-read the Dresden books because, well, why not (okay, really, because I want a brain rest)" trend, I started in immediate on Fool Moon after Storm Front. And again, I'm surprised at the animosity between Murphy and Dresden, along with the total suspicion from Murphy on everything. Have something you can't explain away, blame the crazy person even though you've seen him do crazy stuff.

That said, this book seems to be the turning point in the relationship, with Murphy deciding to trust Dresden, even as Dresden becomes more and more paranoid and suspicious of everyone around him, trying to figure out the clue of the wolf attacks.

I recalled who the ultimate bad guys were in this book, from previous readings. I didn't recall the details, though. I'm amused that some parts that are BIG in my memory of the book are actually small in the actual book.

I also wonder if this is the last book of Harry Dresden as vulnerable. Dresden keeps becoming more and more powerful as the series goes on, to the point that even after he dies, he is still more powerful than most but a handful of wizards around him. I will, of course, have to read them all to figure this out.

So, right, this book.

Werewolves. In the Dresden universe, the multitude of (mythologically existing) types of werewolves are all present. We have the loup garrou, the hexenwolves, the lycanthropes, the theriomorphs (er, shapeshifters), and your standard werewolves. They're all different flavours of the same thing: a human in wolf form who do a lot of damage. People die. Harry exhausts himself and survive by thinking. Totally great.

The thing that gets me in this book is how much guilt and responsibility Dresden places upon himself for the actions of others. "It's my fault this happened," blah blah blah, when, no, it wasn't his fault that someone else chose to do a horrible thing. One thing about self-realization is the acceptance that, no, you are not responsible for others' choices. It's a hard one.

Anyway, of course I recommend the Dresden series. Unsurprising there. I don't recommend reading the first two books more than once, though. Just enough to get your feet into the world.