Summer Knight« an older post
a newer one »Gettings Things Done
Book Notes Instead of being asleep at 17:31 on 21 April 2017, kitt created this: 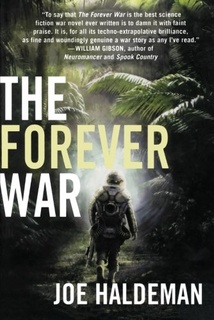 I've had this book on my shelf for a great number of years. I'm pretty sure I bought it some time when I was reading Scalzi's Old Man's War, as people made comparisons between the Forever War and Old Man's War, hey, likely because they both had war and distorted times as theme elements.

The Forever War is an author-described commentary on the Vietnam War, where on the lowest level, none of the soldiers know why they are fighting. There was an interstellar ship that disappeared, and boom, now the entire planet is at war with the other race. The other race is somewhat baffling, in that none of their actions are smart in terms of war.

I can understand the comparisons of Old Man's War to the Forever War, even as I think they are both great science fiction books from the perspective (nominally) of the soldier. Haldeman's Mandella is less witty and less self-aware than Scalzi's Perry, likely because the latter is actually an old man, with a lifetime of experience before he entered the military, while Mandella is a two-tour, everyone-f'ing-died, seasoned vet by the time he's 25. Yet, we are still cheering for Mandella as his world just completely messed up.

I haven't and won't read the sequels, Forever Free and Forever Peace, as I feel the story is self-contained and ends well. While I have to say, "Wow, after all the shit that happened in your world, you end up in a sufficiently happy place, life just doesn't work out that way," I'm okay with this book's ending being relatively happy.

All those reams of theory crammed in my brain; there was plenty of tactical advince about envelopment and encirclemnet, but from the wrong point of view. If you were the one who was being encircled, you didn't have may options. Sit tight and fight. Respond quickly to enemy concentrations of force, but stay flexible so the enemy can't employ a diversionaly force to divert stregth from some predictable section of your perimeter. Make full use of air and space support, always good advice. Keep your head down and your chin up and pray for the cavalry. Hold your position and don't contemplate Dienbienphu, the Alamo, the Battle of Hastings.

Which lead down the rabbit hole of Battle of Dien Bien Phu. Wow. "After several days the French artillery commander, Charles Piroth, unable to respond with any effective counterbattery fire, committed suicide." There's a history lesson for one to learn.

"What, it says I won't make a good officer? I told them that from the beginning. I'm no leader."

"Right in a way, wrong in a way. Want to know what that profile says?"

"I don't suppose it has any big surprises." But I was a little curious. What animal isn't fascinated by a mirror?

"No, it says you're a pacifist. A failed one at that, which gives you a mild neurosis. Which you handle by transferring the burden of guilt to the army."

The fresh beer was so cold it hurt my teeth. "No surprises yet."

"And as far as being a leader, you do have a certain potential. But it would be along the lines of a teacher or a minister; you would have to lead from empathy, compassion. You ahve the desire to impose your ideas on other people, but not your will. Which means, you're right, you'll make one hell of a bad officer unless you shape up."

We ticked off the things that bothered us: violence, high cost of living, too many people everywhere. I'd have added homolife, but Marygay said I just didn't appreciate the social dynamic that had led to it; it had been inevitable. The only thing she said she had against it was that it took so many of the prettiest men out of circulation.

And the main thing that was wrong was that everything seemed to have gotten just a little worse, or at best remained the same. You would have predicted that at least a few facets of everyday life would improve markedly in twenty-two years. Her father contended the War was behind it all: any person who showed a shred of talent was sucked up by UNEF; the very best fell to the Elite Conscription Act and wound up being cannon fodder.

It was hard not to agree with him. Wars in the past often accelerated social reform, provided technological benefits, even sparked artistic activity. This one, however, seemed tailor-made to provide none of these positive by-products. Such improvements as had been made on late-twentieth-century technology were—like tachyon bombs and warships two kilometers long—at best, interesting developments of things that only required the synergy of money and existing engineering techniques. Social reform? The world was technically under martial law. As for art, I'm not sure I know good from bad. But artists to some extent have to reflect the temper of the times. Paintings and sculpture were full of torture and dark brooding; movies seemed static and plotless; music was dominated by nostalgic revivals of earlier forms; architecture was mainly concerned with finding someplace to put everybody; literature was damn near incomprehensible. Most people seemed to spend most of their time trying to find ways to outwit the government, trying to scrounge a few extra K'S or ration tickets without putting their lives in too much danger.

And in the past, people whose country was at war were constantly in contact with the war. The newspapers would be full of reports, veterans would return from the front; sometimes the front would move right into town, invaders marching down Main Street or bombs whistling through the night air-but always the sense of either working toward victory or at least delaying defeat. The enemy was a tangible thing, a propagandist's monster whom you could understand, whom you could hate.

But this war … the enemy was a curious organism only vaguely understood, more often the subject of cartoons than nightmares. The main effect of the war on the home front was economic, unemotional, more taxes but more jobs as well. After twenty-two years, only twenty-seven returned veterans; not enough to make a decent parade. The most important fact about the war to most people was that if it ended suddenly, Earth's economy would collapse.