Underwood See« an older post
a newer one »Cold Days
Book Notes Written with a loving hand by kitt some time around 21:41 on 30 July 2017 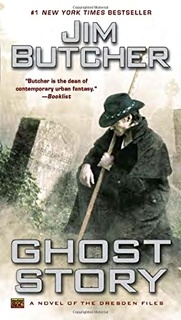 Okay, if you've been following along in all my Dresden Files reviews, you know that I've read these books numerous times. This particular reading is the rereading having reread all the books in order, unlike my usual rereading of picking up the books in the series I like and just rereading those. As a result of this re-read the whole series plan, I'm reading Dresden books that are part of the series, but not necessarily ones I'm really excited about reading.

Which is to say, Harry is in this odd state, the "Ghost" part of the title of the book, and has "not long" to make things right. Except it is hard for someone who is used to being in control, who is used to having power, who is used to brute-forcing his way through things, to actually have no control, no power, no forcing function.

And it makes things awkward. I don't feel Butcher actually conveys how the loss of power, vitality, life actually feels, however. Dresden is still Dresden, even without his ability to do, well, anything.

I enjoyed the book. If you're reading the series, keep going. It's still good, just not a great Dresden book.

I felt like I had when I was a kid, when I was full of energy and the need to expend it doing something enjoyable.
Location: 238

Tough to blame the kid. I’ve been a young man. Boobs are near the center of the universe, until you turn twenty-five or so. Which is also when young men’s auto insurance rates go down. This is not a coincidence.
Location: 1280

“Excalibur, Durendal, and Kusanagi, yes, yes,” Sir Stuart said, his tone a little impatient. “Of course I know the Swords of the Cross.
Location: 1358

Killing — or, more accurately, making the choice to kill — isn’t something we’re good at lately. Ending the life of another living creature used to be part of the daily routine. Chickens were beheaded by the average farm wife for dinner. Fish were likewise caught, cleaned, and prepared for a meal. Slaughtering pigs or cattle was a regular event, part of the turning of the seasons. Most people on earth — farmers — worked and lived every single day with lives they knew they were going to choose to end, eventually.

Killing’s messy. It’s frequently ugly. And if something goes wrong, it can be wretched, seeing another being in mortal agony, which means there’s a certain amount of pressure involved in the act. It isn’t easy, and that’s just considering farm animals.
Location: 2042

What do you do to make up for failing everyone in your life? How do you make it right? How do you apologize for hideous things you never intended to happen?
Location 3688

“We’ve all got choices,” I said calmly. “At the moment, yours are limited. You gonna play ball?”
Location: 3734

Every flat, open space had been covered in spray-painted graffiti, which I guess we’re supposed to call urban art now. Except art is about creating beauty. These paintings were territorial markers, the visual parallel to peeing on a tree. I’ve seen some gorgeous
Location: 3753

"Death should be a learning experience, after all, or what’s the point?”
Location: 4967

“Complicated. Think of your spirit-self as a seed. Your soul is the earth it grows in. You need both when you die. The way I’ve heard it . . . they sort of blend together to become something new. It’s a caterpillar-butterfly thing.”
Location: 5143

One mistake at the end of my life couldn’t erase all the times I had stood unmoved at the edge of the abyss and made snide remarks at its expense.
Page 380

Pain isn’t a lot of fun, at least not for most folks, but it is utterly unique to life. Pain—physical, emotional, and otherwise—is the shadow cast by everything you want out of life, the alternative to the result you were hoping for, and the inevitable creator of strength. From the pain of our failures we learn to be better, stronger, greater than what we were before. Pain is there to tell us when we’ve done something badly—it’s a teacher, a guide, one that is always there to both warn us of our limitations and challenge us to overcome them.
Page 412