Broken River« an older post
a newer one »Rise of the Rocket Girls
Book Notes Posted by kitt at 17:25 on 21 February 2018 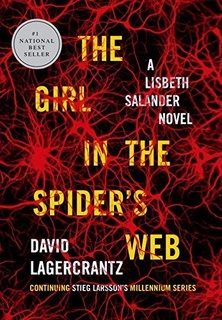 Why am I reading this book?

Eh, this is not Larsson's Salander. The names of the characters and locations are the same as the previous Lisbeth Salander books, but this is a fan fiction book. It takes all the interesting things about the characters, and smoothes out the rough spots, as if Lagercrantz is apologizing for Larsson's previous works, and wants to make the characters normal. The interpersonal dynamics between Berger and Blomkvist are "oh, woe is me I feel guilty for this thing I've been doing for the last thirty years, and which a part of my core, but woe" and apologies for it. The personality that gives Salander her edges are all "oh, woe is me, I'm a cola-guzzling, junk-food eating hacker who binge drinks alcohol and feels like crap" blandness.

The plot could have been good, but, geez, the writing and character destruction, blech.

Okay, apparently my review is going to be full of my groans I've been having while reading the book. Do we really need a description of the RSA encryption's origins? Or the dropping of the dragon tattoo? Really? This is such a crap fan fiction book. The origin of the book (Larsson's will wasn't honored so his thieving family stole his fortune and commissioned this piece of crap) also sucks.

Yeargh, and then Lagercrantz turns her into a comic book character? Gah!

This book is not worth reading, even if you're a Lisbeth Salander fan.

“They’re Grant’s recipe for creativity. By tolerance he means that you need to be open to unconventional ideas and unconventional people. Talent—it doesn’t just achieve results, it attracts other gifted people and helps create an environment that people want to be in. And all these talents have to form a team."
Page 60

You do know what the campaign against you is all about, don’t you? Your uncompromising attitude makes people feel pathetic. Your very existence reminds them just how much they’ve sold out, and the more you’re acclaimed, the punier they themselves appear. When it’s like that the only way they can fight back is by dragging you down.
Page 103

Most of them are just ordinary businessmen. They despise all talk of standing up for things that matter.
Page 105

Was it worth it, just to be able to say a few words? No, Balder wanted to shout out, possibly because he had always been prepared to do whatever it took to become a genius in his field. Anything but the ordinary!
Page 115

Almost absentmindedly he said to himself, “They’re after me.” He could see that it was not unreasonable, even though he had always refused to believe that it would actually come to violence.
Page 119

He had lost count of the number of criminal gangs in his home country that had gone under because they had resorted too often to violence. Violence can command respect. Violence can silence and intimidate, and ward off risks and threats. But violence can also cause chaos and a whole chain of unwanted consequences.
Page 157

Once, before he got to know her, he had suggested that she take up competitive boxing. The derisive snort he got in response stopped him from asking again, though he had never understood why she trained so hard. Not that he really needed to know—one could train hard for no reason at all. It was better than drinking hard. It was better than lots of things.
Page 178

She did not do grief, not in the conventional way at least. Anger, on the other hand, yes, a cold ticking rage.
Page 181

“Surely the great thing about life is that every now and then it springs a surprise on us.”
Page 262

“Ha, no, that it’s always the wrong people who have the guilty conscience. Those who are really responsible for suffering in the world couldn’t care less. It’s the ones fighting for good who are consumed by remorse.
Page 270

... all the jealous, twisted souls came crawling out of the woodwork again, spewing their bile on Twitter and online forums and in e-mails.
Page 305

With that tendency, if you operate in an unhealthy culture you risk becoming just as unhealthy yourself. Who knows, perhaps the will to please leads people to crime as often as evil or greed does. People want to fit in and do well, and they do indescribably stupid things because of it. Is that what happened here?
Page 317

He was reminded of an old riddle his mischievous cousin Samuel liked to put to his friends in synagogue. It was a paradox: If God is indeed omnipotent, is he then capable of creating something more intelligent than himself?
Page 322

"... no matter how highly our superiors rate our new mobile phone system.”

“They think it’s great because it cost so much to install,” Holmberg said.
Page 335

"We have many different loyalties, don’t we? There’s the obvious one, to the law. There’s a loyalty to the public, and to one’s colleagues, but also to our bosses, and to ourselves and our careers. Sometimes, as you all know, these interests end up competing with each other. We might choose to protect a colleague at work and thereby fail in our duty to the public, or we might be given orders from higher up, like Hans Faste was, and then that conflicts with the loyalty he should have had to us."
Page 336

Blomkvist was so worried about the boy and Salander that he had hardly slept.
Page 340

Okay, this is an example of the crappy writing in the book. Rather than show us the ways that Blomkvist is worried, demonstrate how he acts, what he does, what's changed in his behaviour, Lagercrantz just states it. Much of this book is like this, let me just tell you something instead of showing you the something.

Blomkvist knew better than anyone that if you dig deep enough into a story, you will always find links. Life is constantly treating us to illusory connections.
Page 343

“Powerlessness, Mikael, can be a devastating force."
Page 393