Above All Men« an older post
a newer one »The Life Changing Magic of Tidying Up
Book Notes Instead of being asleep at 20:12 on 19 June 2016, kitt created this: 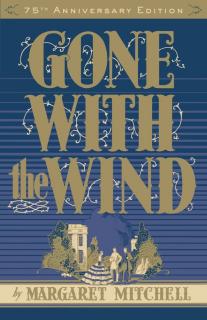 This book has been in my to-read pile for, well, um... uh.... 20 years? No, that's not quite right, but let's go with it. I have it in paperback and audiobook form, and finally decided that, dammit, I am going to read or listen to this book and finally remove it from my to-read pile. In reality, I want to read it because I want to see if my "If you see the movie, and someone tells you the book is better, don't bother to read the book, because you already know the high points" theory, formed after reading This Is Where I Leave You having seen the movie first, is valid. I've seen the Gone With The Wind movie. I saw it waaaaaaaaay long ago, before I was old enough to understand the nuances of the plot, story, messages. I plan on watching the movie again after finishing the book.

I was not expected to be moved by this book, as Scarlett O'Hara really isn't a nice person. As Rhett puts it, she has one of those flexible consciences that allows her to survive, but said conscience doesn't make for a pleasant person. That said, the whole Southern genteel society which seems to use gossip as its internal fuel, is one that I am REALLY sure I would have suffered greatly in.

I also struggled with this book. The language bothered me a lot, even though it was acceptable language at the time. The whole "I'm bothered by this" is also amusing to me. I curse like a sailor, using f--- and sh-- ALL THE TIME in my language, yet reading "niggers" and "darkies" bothers the crap out of me. The descriptions of life in the South around the Civil War era bugged me, too, until I realized that both THE BOOK IS FICTION, and it really didn't portray the bad stuff well at all. There was no whipping or abuse at Tara, the O'Hara plantation, because Ms Ellen was, of course, a lady. There was no physical retaliation when the original Tara foreman was fired (for getting the next door's "white trash" daughter pregnant, but come on, let's be real, in real life, it was probably a slave who was pregnant). The book seems to make slaves an okay thing to own (but hiring convicts for manual labor isn't).

The book had various classifications of people, including field niggers, house niggers, white trash, crackers, and those received. The house niggers looked down on field niggers and the white trash (poor white people), while the white trash envied the house niggers, and I was all, what, really? Then I remembered, the book is fiction. I couldn't tell if this happened, it could, why not given human nature, but, really did they? And then I thought, maybe, even though this is fiction, it might be true. Or, it really might be what Mitchell projected happened, she was born into a rich family, she heard Civil War stories on the knees of Confederate veterans, she formed her image of the Civil War South when she was six. So...

Yeah, reviewing Wikipedia, "Perhaps the most enduring legacy of Gone with the Wind is that people worldwide would incorrectly think it was the true story of the Old South and how it was changed by the American Civil War and Reconstruction. The film version of the novel "amplified this effect". Scholars of the period have written in recent years about the negative effects the novel has had on race relations by its resurrection of Lost Cause mythology." As for the Lost Cause, it is the "belief was founded upon several historically inaccurate elements. These include the claim that the Confederacy started the Civil War to defend states' rights rather than to preserve slavery, and the related claim that slavery was benevolent, rather than cruel."

Yeah, so, back to the book.

The book wasn't what I was expecting it to be, even though I've seen the movie way back when. The book is a tale of longing, duty, and loyalty. It's a book about surviving, about accepting the present as it is instead of living in the past. It is a cautionary tale about the loneliness of a life lacking vulnerability. It's about the stupidity of a woman unable to see beyond herself.

And, it's the story about a lifelong desire for a love that can never be fulfilled.

That is what caught me off guard. The yearning, wanting of one person, while the beauty and love of another (better fit) remained at arm's length.

I mean, think about it, the need of the Civil War to end slavery is enough of a tragedy. This whole book is a tragedy. Those dreaming of a lost past that never really existed. Those with unrequited love. Those who died for a cause not their own. The whole thing. A tragedy.

So, other parts of the book that stood out for me.

When Scarlet was describing Ashley, she notes, "He was as proficient as any of the other young men in the usual county diversions: hunting, gambling, dancing, and politics." In an era without television (parents generation) or the internet (our generation), without telephones or cars, what did people do to fill their days? Right. Diversions. Though, Ashley did also read a lot. (Books. Bah.)

There's a part about, at 10 years, boy slaves were sent the cobbler, the cow man, the mule boy, the wheelwright or carpenter, to see about their aptitudes. If they "showed no aptitude for any of these trades, they became field hands and in the opinion of the negroes, they had lost their claim to any social standing at all." Again, "Huh." True? Not true? Makes sense, but it makes the assumption that slaves were "happy" workers. It sounds good on paper, but was it true?

And the description of Scarlett's mother's world:

Ellen’s life was not easy, nor was it happy, but she did not expect life to be easy, and, if it was not happy, that was woman’s lot. It was a man’s world, and she accepted it as such. The man owned the property, and the woman managed it. The man took the credit for the management, and the woman praised his cleverness. The man roared like a bull when a splinter was in his finger, and the woman muffled the moans of childbirth, lest she disturb him. Men were rough of speech and often drunk. Women ignored the lapses of speech and put the drunkards to bed without bitter words. Men were rude and outspoken, women were always kind, gracious and forgiving.

I live in a world of gender inequality, yes, but I have not know the level of inequality that existed even 100 years ago: women haven't yet been able to vote in the United States for 100 years, that's coming up in 4 more years. Again, "I can imagine, but is this real?" How could a family survive in the wild West without some level of equality? Ehhhhh... uncomfortable about this, too.

“That’s not courage,” he said tiredly. “Fighting is like champagne. It goes to the heads of cowards as quickly as of heroes. Any fool can be brave on a battle field when it’s be brave or else be killed..."

Yeah, so there's a repeating pattern in Scarlett's behaviour and that's in continually wanting what she doesn't or can't have. Sometimes, the longing is for "Home! If she were only home, Yankees or no Yankees. Home, even if Ellen was sick. She longed for the sight of Ellen’s sweet face, for Mammy’s strong arms around her." The entire book is a longing for Ashley. There's a longing for a man to be strong and take away her burdens. And, of course, the longing for security and love. At no point is Scarlett satisfied, nor does she ever seem grateful for what she has. I want to believe this was a deliberate choice by Mitchell, to create an ironic character who scoffs at those pining for a past that will never be restored, while simultaneously striving for a future that will never be.

In this book, the only person I could relate to or even like was Rhett (also, likely written this way). Seriously, the man kept dropping truth bombs. "Then you’ve made the only choice. But there’s a penalty attached, as there is to most things you want. It’s loneliness.” Even the passing remarks have "Huh. Yes." truths in them.

And then, there was this line, "And she could understand his shrewd caginess, so like her own, his obstinate pride that kept him from admitting his love for fear of a rebuff."

If ever two characters unable to communicate were written, it was Scarlett and Rhett. Together, they would have been unstoppable. And neither could be vulnerable to the other. Right, this book was written 150 years too late for these fictional characters. More's the pity.

I enjoyed it. I'm glad I read it. I'm more glad I remembered THE BOOK IS FICTIONAL as I was reading it. It's an entertaining book and easy to think it was non-fiction. It wasn't. Made up from 70 years after the fact, from a winner's perspective. I'm looking forward to watching the movie again.