The Terracotta Bride« an older post
a newer one »Oryx and Crake
Book Notes Instead of being asleep at 21:03 on 2 November 2016, kitt created this: 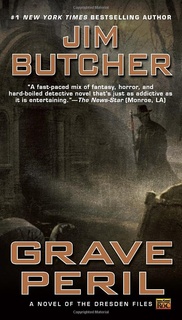 I remember when I first read this book being very surprised at the abrupt introduction of Michael Carpenter into the Dresden Files series. He shows up on the first page of this book, yet is already Harry's best friend. He's also a Knight of the Cross, having been one for the previous twenty years. The man had killed a dragon and knows a lot of lore that Harry doesn't know.

There are a number of other series characters introduced, what with Thomas showing up, Charity having incredibly stilted speaking patterns, and Lea revealing more of Harry's past.

I recall thinking while reading, that the book felt choppy. The plot rather goes along nominally linearly, but references a lot of events that had happened a couple months before. It also has a few jumps from location to location, and starts a lot of unfinished threads.

This is, however, the first book in the Dresden series where Butcher catches his stride. Harry is Harry, and starting to come into his own. The world is fleshed out a bit more, with the lore starting to solidify. If I could direct an author's hand (which I can't, and wouldn't even with the chance), I'd rework the first two books to be more like this one and later books: being Dresden and less Dresden-becoming.