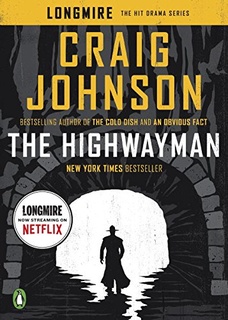 Despite Longmire being a complete and total asshat in the television series (why, oh why was Lou Diamond Philips cast as Henry Standing Bear, then morphed into a whiny small man?), Longmire in the books is still a fantastic character. I'm still reading Johnson's Longmire books with enthusiasm.

And this one doesn't fail to entertain.

See how I just blew off that grammar rule about not starting a sentence with the word "and?" Ah, the delights of not writing an essay for a grade.

Anyway, Longmire. The book is a novella, which means it is shorter than a full novel, as is the case with this book. There isn't an involved mystery, though there is a small mystery and a couple coincidences that end up being not-so-coincidentals. There are also a number of super-natural occurrences, of which I'm not a big fan, but the mind can play tricks, and what one calls a ghost, another can call adrenaline and hallucinations.

I enjoyed the book, and recommend if you're a Longmire fan, keep reading. If you're not yet a Longmire fan, start at the beginning of the series. There's some weird stuff in this book that references events from the first couple books.

“He grew up—every once in a while it happens—been there, done that. Hell, you know as well as I do that young outlaws make the best lawmen.”
Location 296

“I think we’re all haunted, by one thing or another.”
Location 576

We’re taught to work independently, but nothing strikes you quite like a 10-78, the urgency to reach a fellow officer in need. It’s instinctual to individuals who are trained to respond and risk their lives for each other and complete strangers.
Location 640

"In my experience with the residents of the Camp of the Dead, they rarely act randomly or leave things to chance.”
Location 847

There was nothing normal about a career in law enforcement, and the strains of making life-and-death decisions every day were bound to have an effect.
Location 868

I didn’t have to wonder long, however, as I plunged into the Wind River and it seemed as though the 640 muscles in my body contracted to the point of breaking all 206 bones.
Location 938

“I am always interested when someone commits an act such as Womack’s as to what their conversation might have been previously.”
Location 1101

I removed the phone from my ear to enable a full-force face palm of epic proportions and then returned it. “You’re kidding.”
Location 1139

“The first time the term was used was back in 1320, nonesmanneslond, which was used to describe disputed territory between two kingdoms; then it was the name for a place outside the walls of London that was used for executions and even a spot on the forecastle of ships.”
Location 1153

“There are many, but fire is bad. The terrible thing about fire is that you become one with the wind, your ashes carried around the world over and over again seeking peace but finding none.
Location 1238

It was strange the paths the human heart chose to take and the attachments it made along the way. The surest sign of the altruistic nature of the organ is its ability to ignore race, color, creed, and gender and just blindly love with all its might—one of the most irrefutable forces on earth.
Location 1482