The Lion, the Witch, and the Wardrobe« an older post
a newer one »The Beautiful and Damned
Book Notes kitt decided around 20:31 on 2 December 2017 to publish this: 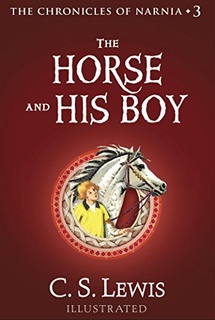 This is Book 3 of The Chronicles of Narnia.

Okay, here's the first book of the Chronicles of Narnia series I don't have any recollection having read before. I have to say, when I was reading it, I kept wondering when the R.R. Martin moment was going to happen. When is the bad guy going to win.

This book gave me the epiphany (yes, I'm slow sometimes) that we read books as a way to believe that the good guys can win in the end, when life teaches us the bad guys nearly always win. Nearly always. The powerful are seldom toppled before they do horrific damage.

Anyway, the book. The Horse. He's a talking horse. He befriends a boy. They escape the horse's master, who was a powerful, violent, hateful warrior. They are guided by circumstance, which turns out not to be so arbitrary, into fulfilling a prophesy. Go, good guys, go!

Again, I tried to read it not for the story, but for the Christian allegory that it is supposed to be. There are elements of God helps those who help themselves, elements of Stoicism's do what you need to do without complaining, and elements of pure whimsy in the book.

I'm on a roll, so will continue reading the series. The books are contininuing to be quick, two hour or so reads, which makes them a good end-of-year series to finish.

I really think the "only a girl" and "just like a girl" and the subtle and not so subtle remarks of Lewis that women and those of the female gender are somehow less of a person because of their gender is REALLY going to turn me off these archaic books.

"‘O my mistress, do not by any means destroy yourself, for if you live you may yet have good fortune but all the dead are dead alike.’"
Page 39

A not-so-bad reason to keep living: it is irreversable.

Having been brought up by a hard, closefisted man like Arsheesh, he had a fixed habit of never telling grown-ups anything if he could help it: he thought they would always spoil or stop whatever you were trying to do.
Page 79

Yah. Substitute "people in power" or "people who don't have your best interest at heart" or "people who haven't earned the right to know of your vulnerabilities" for "grown-ups" and you'll be accurate, too.

Shasta lay down beside it with his back against the cat and his face toward the Tombs, because if one is nervous there’s nothing like having your face toward the danger and having something warm and solid at your back.
Page 92

“But I want her,” cried the Prince. “I must have her. I shall die if I do not get her—false, proud, black-hearted daughter of a dog that she is! I cannot sleep and my food has no savor and my eyes are darkened because of her beauty. I must have the barbarian queen.”
Page 118

Okay, this is a common theme in a lot of the books I'm reading: being overwhelmed with desired that it blocks out all rational thought. This is a for-kids version, sure, but there are others. That longing can be overwhelming. There's a similar theme in The Beautiful and Damned, which is a considerable contrast to this book.

One of the drawbacks about adventures is that when you come to the most beautiful places you are often too anxious and hurried to appreciate them...
Page 132

He had not yet learned that if you do one good deed your reward usually is to be set to do another and harder and better one.
Page 155

You’re not quite the great Horse you had come to think, from living among poor dumb horses. Of course you were braver and cleverer than them. You could hardly help being that. It doesn’t follow that you’ll be anyone very special in Narnia. But as long as you know you’re nobody very special, you’ll be a very decent sort of Horse, on the whole, and taking one thing with another.
Page 161

Seneca's quote comes to mind: “I judge you unfortunate because you have never lived through misfortune. You have passed through life without an opponent— no one can ever know what you are capable of, not even you.”

Shasta was dreadfully frightened. But it suddenly came into his head, “If you funk this, you’ll funk every battle all your life. Now or never.”
Page 199

“Never taunt a man save when he is stronger than you: then, as you please.”
Page 232

“For this is what it means to be a king: to be first in every desperate attack and last in every desperate retreat, and when there’s hunger in the land (as must be now and then in bad years) to wear finer clothes and laugh louder over a scantier meal than any man in your land.”
Page 240