Everything Changes« an older post
a newer one »Landline
Book Notes Posted by kitt at 22:15 on 8 August 2015 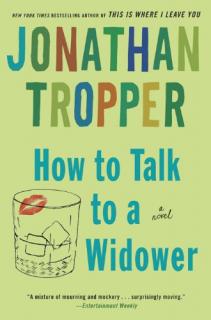 The third of three books I have by Jonathan Tropper from Mom. As predicted, I ripped through them in a week. I liked this book a lot. A large number of literally-laugh-out-loud parts that I laughed out loud to.

I currently have enough empirical data to state Tropper's style is first person narration of a guy who has had someone close to him die, has a screwed-up-in-some-way family, and is trying in some way to get his life back together in a way where he can move forward.

In this book, yup, that's the plot. The narrator's wife died a year before and he is still grieving. He is rather sucking at moving on, despite his screwed up family attempts to help him. He has a twin sister, another little sister, an actress mom and a doctor dad. Things aren't particularly clean, though, as he's more than a little odd, even before he met his now deceased wife, his family is screwed up in odd ways (but still family), and, well, as the book shows so well about human nature, sometimes you just want to keep the pain, wrap yourself in it, and use that cloak of pain to keep everyone else away.

The book has enough truth in it about human nature and how we are all screwed up that I suspect anyone reading it will find himself in the book somewhere. Or maybe discover something new about human nature (as I did: that guys will trim their pubic hairs to make their penises look bigger. Who knew?).

I enjoyed this book a lot more than the previous, and a bit more than the first one by Tropper I read. My first reaction after finishing was to go look for another by him, though I don't know if he has more written. I then realized that three in a row by him is likely one too many in a row, so didn't check if he has another. I'll read something else next, and come back to Tropper later.