The Chain« an older post
a newer one »The Spy and The Traitor
Book Notes kitt decided around 11:11 on 21 September 2019 to publish this: 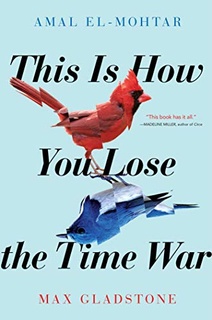 Oh, this is such a lovely book.

Based on the title, we know it is a book dealing with time travel (else why have a time war?). There's the briefest of adjustments in the beginning with the world building, and then we see that while the book is science fiction with two sides having agents who skip through time lines adjusting a world here, changing an action there, in order to shape the future into each side's desired outcome, and then we arrive at the heart of the tale, which is a love story.

The ending of the book is so beautiful that one wants to (and should) immediately flip back to the beginning of the book and read it again, pick up the details missed in the first reading, understand where the threads twist and cross. The different elements of history woven into the story make the story that much more beautiful.

But wars are dense with causes and effects, calculations and strange attractors, and all the more so are wars in time. One spared life might be worth more to the other side than all the blood that stained Red’s hands today. A fugitive becomes a queen or a scientist or, worse, a poet. Or her child does, or a smuggler she trades jackets with in some distant spaceport. And all this blood for nothing.
Page 2

Killing gets easier with practice, in mechanics and technique. Having killed never does, for Red. Her fellow agents do not feel the same, or they hide it better.
Page 3

Nearly always amused when an Ottawa reference pops up in a book.

They drag the logs to camp. They split them, trim them, plane them, frame them into engines of war. Two weeks later, the planks lie shattered around the fallen walls of a city still burning, still weeping. Progress gallops on, and blood remains behind.
Page 34

Some days Blue wonders why anyone ever bothered making numbers so small ; other days she supposes even infinity needs to start somewhere.
Page 39

Eating’s gross, isn’t it? In the abstract, I mean. When you’re used to hyperspace recharging stations, to sunlight and cosmic rays, when most of the beauty you’ve known lies in a great machine’s heart, it’s hard to see the appeal of using bones that poke from spit - coated gums to mash things that grew in dirt into a paste that will fit down the wet tube connecting your mouth to the sack of acid under your heart.
Page 44

But I enjoy eating these days. More of us do than care to admit it publicly. I revel in it, as one only revels in pursuits one does not need. The runner enjoys running when she need not flee a lion. Sex improves when decoupled — sorry — from animalist procreative desperation (or even from the desperation of not having had sex in a while, as I’ve had cause to note after my recent two decades ’ sojourn and attendant dry spell).
Page 44

Humans need marks to strive for — but imperfect systems decay. So we build them ideals. Change agents climb upthread, find helpful strands, preserve what matters, and let what doesn’t fall to dust : mulch for the more perfect future’s seed.
Page 60

So the great-grand-emperor’s word goes out, and so a port is built, and sailors flock, beckoned by adventure. (Adventure works in any strand — it calls to those who care more for living than for their lives.)
Page 67

She stained the page with herself. She sometimes forgets what she wrote, save that it was true, and the writing hurt. But butterfly wings break when touched. Red knows her own weaknesses as well as anyone. She presses too hard, breaks what she would embrace, tears what she would touch to her teeth.
Page 86

I wish I could have shown you where I’m from, hand in hand, the world I set out to build and to protect — I don’t think you would have liked it, but I want to see it reflected in your eyes. I wish I could have seen your braid, and I wish we could have left all those horror shows behind and found one together, for ourselves.

That’s all I want now. A small place, a dog, green grass. To touch your hand. To run my fingers through your hair.
Page 164

The tears have anger in them at first, but anger burns out fast. Tears stay.
Page 169

She has lost all the subtlety Blue ever teased her for lacking, her old competitive patience for a good officer’s work. She abandons her tools, retreats to the grossest physical foundations. Winning this battle, losing that, strangling that old evil man in a bathtub in his skyscraper penthouse, feels empty because it is : In the war they wage through time, what lasting advantage comes from murdering ghosts, who, with a slight shift of threads, will return to life or live different lives that never bring them to the executioner’s blade? Repetitive task, murder. Kill them and kill them again, like weeds, all the little monsters.

No death sticks but the one that matters.
Page 175

She cannot stop herself from reaching out, from trying with a touch to say, I’m here. Sometimes you have to hold a person, though they’ll mistake embrace for strangulation.
Page 182

Red may be mad, but to die for madness is to die for something.
Page 183