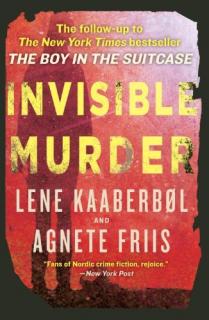 Another one of my Mom-bought books, this one continues the story of Nina Borg, a medical activist who helps people in dire (think human trafficking) situations. I had previously read the Boy in the Suitcase, I thought last year, but didn't have it on my year-end list, so either I missed it, or read it in the previous year. I'm a bit puzzled about when I read it, but it was fairly recently.

I hadn't overly liked the Boy in the Suitcase, so I was a bit surprised to be reading this one as a continuation of that character and that plotline. Given that this is a series of Mom-books, I shouldn't have been surprised.

This book starts out following two brothers, one a bit reckless, the other who is mistaken for him and has to pay for his brother's sins. A few crazy mistaken-identities later, and we have a gypsy-looking kid from Hungary, travelling across Europe to track down his brother, and Nina trying to save a number of very sick children, and a kidnapping, and a huge mess of her kid's life, though really, said kid is just being a teenager.

I'm not a fan of this character, nor of this series. It wasn't a bad book, nor was it poorly written, I just don't like the genre. If this genre is to your liking, totally worth reading.