The Skull Throne« an older post
a newer one »Miniatures
Book Notes Yeah, kitt finished writing this at 21:52 on 13 February 2017 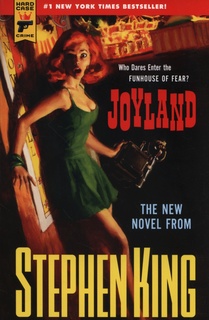 I haven't read a Stephen King book in a long while. I really enjoyed King's Eyes of the Dragon when it was released in the late eighties (alas, my copy was in a box of my favorite books that I stored in student summer storage at Tech, and it disappeared, along with my childhood copy of Where The Red Fern Grows), and delight in King's non-horror fiction. While I don't recall where I picked up this book in paperback, I enjoyed it. In typical King fashion, the reading is fast and easy, the plot straight-forward, and the emotional parts appropriately hit you in the gut.

The book is about Devin Jones, who works at an amusement park for a summer. There was a murder at the park four years before. The ghost is said to still roam the park. Devin has a summer, makes friends, wears the mascot costume a lot, meets his neighbors, has an adventure, lives a life. The book is a quick read. I recommend it, yes.

Unsurprisingly, I nicked a number of pages while reading.

When it comes to the past, everyone writes fiction.
p.47

"Son, do you know what history is?"

"Uh... stuff that happened in the past?"

"Nope," he said, tying on his canvas change-belt. "History is the collective and ancestral shit of the human race, a great big and ever-growin pile of crap. Right now we're standin at the top of it, but pretty soon we'll be buried under the doodoo of generations yet to come. That's why your folks' clothes look so funny in old photographs, to name but a single example. And, as someone who's destined to be buried beneath the shit of your children and grandchildren, I think you should just a leetle more forgiving."
p 70

But the mind defends itself as long as it can. After the first shock of such news dissipates, maybe you think, Okay, it's bad, I get that, but it's not the final word; there still might be a chance. Even if ninety-five percent of the people who draw this particular card go down, there's still that lucky five percent. Also, doctors misdiagnose shit all the time. Barring those things, there's the occasional miracle.
p. 93

You start to worry, then you start to get it, then you know. Maybe you don't want to, maybe you think that lovers as well as doctors misdiagnose shit all the time, but in your heart you know.
p. 95

"Maybe your parents are getting a divorce. Mine did, and it damn neared killed me..."
p. 104

I think so but can't say for sure, because passing time adds false memories and modifies real ones.
p. 110

We could see other fires -- great leaping bonfires as well as cooking fires -- all the way down the beach to the twinkling metropolis of Joyland. They made a lovely chain of burning jewelry. Such files are probably illegal in the twenty-first century; the powers that be have a way of outlawing many beautiful things made by ordinary people. I don't know what that should be, I only know it is.
p. 117

I would argue that -- fantasies aside -- the majority of men are monogamous from the chin up. Below the belt-buckle, however, there's a wahoo stampeder who just doesn't give a shit.
p. 127-128

"I can't understand why people use religion to hurt each other when there's already so much pain in the world," Mrs. Shoplaw said. "Religion is supposed to comfort"
p. 183

On this, I would begin to argue that this statement isn't necessarily true for religions other than that of the mono-theistic Judeo-Christian-Islam type. Maybe not even for the Judeo and Islam part. Of note, see Hays' comment on Christian Atheism and the problems it's caused since its founding.

"Young women and young men grow up, but old women and old men just grow older and surer they've got the right on their side. Especially if they know scripture."

I remembered something my mother used to say. "The devil can quote scripture."

Page 183 had a lot of quotes that struck true.

"Some people hide their real faces, hon. Sometimes you can tell when they're wearing mask, but not always. Even people with powerful intuitions can get fooled."
p. 301

The last good time always comes, and when you see the darkness creeping toward you, you hold on to what is bright and good. You hold on for dear life.
p. 307-308

All page numbers are from the paperback. I'm looking now to see if a hardback was published.

That you read my review AND