Blood Rites« an older post
a newer one »The Collapsing Empire
Book Notes Yeah, kitt finished writing this at 14:25 on 14 May 2017 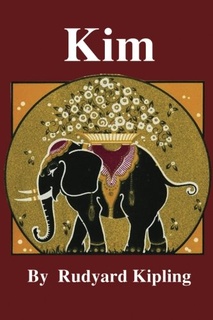 Right. Kim. Kimball O'Hara, an orphaned Irish boy who grew up in India during the English colonial days. Or rather, during the Great Game, before India was split into India and Pakistan, an important distinction. Kim's story is actually in parts of the Pakistani areas, which is how I came to read the book.

Let's ignore the fact that the book has been sitting on my mother's bookcase since forever, and that I tend to grab books from her shelves and read them (hello, Voltaire). Instead, let's note that when a good friend says, "This book totally describes my childhood!" and then repeats several times about how it is one of his favorite books EVAR, well, you read the book.

Of course, I'm not likely to describe the plot, so many other sites do that, but I will note that the book is available on Gutenberg, so little excuse not to read it.

I enjoyed the book. In this case, I made the mistake of switching from audiobook to ebook. This technique normally works quite well for me, but in this case, didn't, because I needed to look up a number of the words, see the spelling, search on wikipedia for the references, and understand better what was going on. The audiobook didn't lend itself to that style of understanding, so I gave up on it fairly quickly. That said, if audiobooks are your thing, and you want to hear the book in English, I recommend this performance of Kim. It is good.

I don't have pages for the quotes, because I read a Gutenberg version that lacks page breaks. Easy enough to find them, I suspect.

'What profit to kill men?'

'Very little--as I know; but if evil men were not now and then slain it would not be a good world for weaponless dreamers. I do not speak without knowledge who have seen the land from Delhi south awash with blood.'

And at the last what wilt thou do?'

'Let the Gods order it. I have never pestered Them with prayers. I do not think They will pester me.

'Hast thou never desired any other thing?'

'Yes--yes--a thousand times! A straight back and a close-clinging knee once more; a quick wrist and a keen eye; and the marrow that makes a man. Oh, the old days--the good days of my strength!'

'That strength is weakness.'

'It has turned so; but fifty years since I could have proved it otherwise,' the old soldier retorted, driving his stirrup-edge into the pony's lean flank.

'Who bears arms against the law?' a constable called out laughingly, as he caught sight of the soldier's sword. 'Are not the police enough to destroy evil-doers?'

'It was because of the police I bought it,' was the answer.

Then Kim would join the Kentish-fire of good wishes and bad jokes, wishing the couple a hundred sons and no daughters, as the saying is.

Very often it suits a long-suffering family that a strong-tongued, iron-willed old lady should disport herself about India in this fashion; for certainly pilgrimage is grateful to the Gods.

And the old woman's family, to be sure.

The old lady is, after all, intensely human, and lives to look upon life.

'Flies go to carrion,' said the Oorya, in an abstracted voice.

'For the sick cow a crow; for the sick man a Brahmin.' Kim breathed the proverb impersonally to the shadow-tops of the trees overhead.

The Oorya grunted and held his peace.

Personally, he believed in Brahmins, though, like all natives, he was acutely aware of their cunning and their greed.

'But why not sit and rest?' said one of the escort. 'Only the devils and the English walk to and fro without reason.'

'Never make friends with the Devil, a Monkey, or a Boy. No man knows what they will do next,' said his fellow.

And further, he was prepared to spend serene years in his quest; having nothing of the white man's impatience, but a great faith.

Bennett looked at him with the triple-ringed uninterest of the creed that lumps nine-tenths of the world under the title of 'heathen'.

'That is not well. These men follow desire and come to emptiness. Thou must not be of their sort.'

'You will be what you're told to be,' said Bennett; 'and you should be grateful that we're going to help you.'

Kim smiled compassionately. If these men lay under the delusion that he would do anything that he did not fancy, so much the better.

I feel I understand Kim.

'It is no wrong to pay for learning. To help the ignorant to wisdom is always a merit.'

The indifference of native crowds he was used to; but this strong loneliness among white men preyed on him.

Kim meditated poisoning him with opium borrowed from a barrack-sweeper, but reflected that, as they all ate at one table in public (this was peculiarly revolting to Kim, who preferred to turn his back on the world at meals), the stroke might be dangerous.

'Not in the least. Don't make that mistake.'

'It was said once to me that it is inexpedient to write the names of strangers concerned in any matter, because by the naming of names many good plans are brought to confusion.'

'Sahibs [Englishmen] get little pleasure of travel,' he reflected.

'... There are many boys there who despise the black men.'

'Their mothers were bazar-women,' said Kim. He knew well there is no hatred like that of the half-caste for his brother-in-law.

Do not weep; for, look you, all Desire is Illusion and a new binding upon the Wheel. Go up to the Gates of Learning. Let me see thee go ... Dost thou love me? Then go, or my heart cracks ... I will come again. Surely I will come again.

'Now I see, however,'--he exhaled smoke slowly--'that it is with them as with all men--in certain matters they are wise, and in others most foolish. Very foolish it is to use the wrong word to a stranger; for though the heart may be clean of offence, how is the stranger to know that? He is more like to search truth with a dagger.'

'... Therefore I say in my heart the Faiths are like the horses. Each has merit in its own country.'

'I did not seek truth in those days, but the talk of doctrine. All illusion! I drank the beer and ate the bread of Guru Ch'wan. Next day one said: "We go out to fight Sangor Gutok down the valley to discover" (mark again how Lust is tied to Anger!) "which Abbot shall bear rule in the valley and take the profit of the prayers they print at Sangor Gutok." I went, and we fought a day.'

'We were well matched. Ignorance and Lust met Ignorance and Lust upon the road, and they begat Anger. The blow was a sign to me, who am no better than a strayed yak, that my place is not here. Who can read the Cause of an act is halfway to Freedom! "Back to the path," says the Blow. "The Hills are not for thee. Thou canst not choose Freedom and go in bondage to the delight of life."'

'Our Lord Himself cannot make the Wheel swing backward.'

'She has acquired merit beyond all others,' said the lama. 'For to set a man upon the way to Freedom is half as great as though she had herself found it.'

And so he petted and comforted Kim with wise saws and grave texts on that little-understood beast, our Body, who, being but a delusion, insists on posing as the Soul, to the darkening of the Way, and the immense multiplication of unnecessary devils.
Chapter 15

'My chela is to me as is a son to the unenlightened.'

'Say grandson, rather. Mothers have not the wisdom of our years. If a child cries they say the heavens are falling. Now a grandmother is far enough separated from the pain of bearing and the pleasure of giving the breast to consider whether a cry is wickedness pure or the wind.'

'I have seen something of this world,' she said over the crowded trays, 'and there are but two sorts of women in it--those who take the strength out of a man and those who put it back. Once I was that one, and now I am this.

'Get up and see the world! This lying abed is the mother of seventy devils ... my son! my son!'

She trotted forth to raise a typhoon off the cook-house, and almost on her shadow rolled in the Babu, robed as to the shoulders like a Roman emperor, jowled like Titus, bare-headed, with new patent-leather shoes, in highest condition of fat, exuding joy and salutations.