The End of the World Running Club« an older post
a newer one »Essentialism
Book Notes Posted by kitt at 17:25 on 8 October 2017 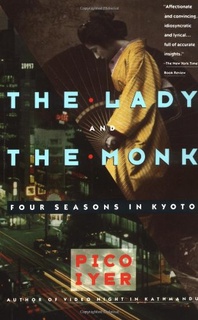 Again (and again), when a dear friend offers you a book to read, you read it, especially when said friend says, "This book reminds me of us."

I, unfortunately, left this book in my reading pile too long, and Moazam bought himself another copy. Or maybe fortunately, because I now have my own copy.

The book is the tale of Iyer's adventure in Japan to learn about Zen Buddhism "from the inside" while living in a monastery, along with his meeting Sachiko and their subsequent friendship. It is also about seeing a world the way you wish it to be, innocent and unmarred by pain, instead of grounded in a perhaps ugly reality.

Iyer's writing evokes the mood of his surroundings, of his experience, of the world around him, in a way that pulls the reader in. One can almost smell the cherry blossoms, feel the weight of the air heavy with water before the rain, the sounds of the city sleeping but not quite, the silence of the monastery, the disquiet energy of his companions seeking quiet in a place it can't be found.

I enjoyed the book. It wasn't a book I would have chosen for myself, which makes it a good choice by Moazam.

Many of them, he said, had wearied of the worldly aspects of the monastic life - the politicking, the emphasis on sheer willpower, the need for subservience, the stress on hierarchy: all the quallities, in short, that could make temples seem just like any other affluent, rule-bound Japanese company.
Page 24

"I remember this one Zen teacher told me, soon after I arrived, that the appeal of Zen to many foreigners was like a mountain wrapped in mist. Much of what hte Westerners saw was ust the beautiful mist; but as soon as they began really doing Zen, they found that its essence was the mountain: hard rock."
Page 25

Jizō, he explained, was the patron saint of children and of travelers (very apt, I thought, since very child is a born adventurer and every traveler a born-again child).

So perhaps these magazines, with their secular cult of the virgin, served only to encourage sex in the head, catering to that famously sentimental Japanese Romanticism that perfers the idea of a thing, its memory or promise, to the thing itself.

The monk wrote about his frissons of pleasur when passing an unknown woman on a night of moon viewing, and the protocol of making love; how "lamplight makes a beautiful face seem even more beautiful," and "beautiful hair, of all things in a woman, is most likely to catch a man's eye." Most unexpected of all, at least to me, were the priest's anxious obsessiveness with appearances ("A man should be trained in such a way that no woman will ever laugh at him"), and his strongly worded snipes about lower-class men and other "insufferable" or "disagreeable" types ("It is unattractive when people get in a society which is not their habitual one").
Page 56

There was, I thought, a metaphor in this one: one could not plan epiphanies any more than one could plan surprise visits from one's friends.
Page 57

All festivals, of course, aer acts of collective myth-making, chances for a nation to advertise its idealized image of itself.

Besides, the pairing of Western men and EAstern women was as natural as the partnership of sun and moon. Everyone falls in love with what he cannot begin to understand. And the other man's heart is always greener.

The Japanese were famous, I knew, for their delight in lacrimae rerum and for finding beauty mostly in sadness; indeed it was often noted that their word for "love" and their word for "grief" are homonyms - and almost synonyms too - in a culture that seems to love grief, of the wistful kind, and to grieve for love.

Foreigners meant freedom in a land where freedom itself was largely foreign.

Making our way towards the port, we looked out at the ocean liners, black in the chromium light, and sitting down on a log, the wind blustering all about us, we fell into our usual patter, she telling me how America was the land of the free, I telling her how much of what I saw in America was loneliness.

Encouraging people to realize their potential was an especially dangerous occupation in a country that taught them to fulfill their duty instead.

The moon, I recalled, was the one possession that even monks did not renounce. When he lost his house in a fire, the Zen poet Masahide wrote, he found occasion for new hope: he now enjoyed a better view of the rising moon.

And I remembered how the demon Mara, when he was trying to tempt the Buddha, having failed to bring him down with discontent or desire, unleashed his strongest weapon: love.
Page 183

(When she asked her students to find three adjectives to describe themselves, a longtime foreign teacher told me, she had had to ban the use of "cheerful," or else every girl in class would use it.)

Besides, pretense could have its virtues. I thought back to the line in the Singer story "A Piece of Advice" I had read a few months before: "If you are not happy, act the happy man. Happiness will come later. If you are in despair, act as though you believe. Faith will come afterwards."

By the same token, a horse that imitates a champion thoroughbred may be classed as a thoroughbred, and the man who imitates Shun bleongs to Shun's company. A man who stuides wisdom, even insicncerly, should be called wise."
Page 185

Partly, perhaps, she could only apprehend a foreigner - and romance - through the imported images she'd consumed, just as I could see her only through the keyhole of ancient Japanese love poems. But partly, too, I could see, with a pang, how keen she was to remove our lives from the everyday world, to lift them to some timeless, fairy-tale realm, immutable, impersishable, and immune from unhappy realities. Realism was reserved for what she did at home ...; our time was "dream time."
Page near-the-end-of-the-book-past-page-185

Sums up the book nicely. 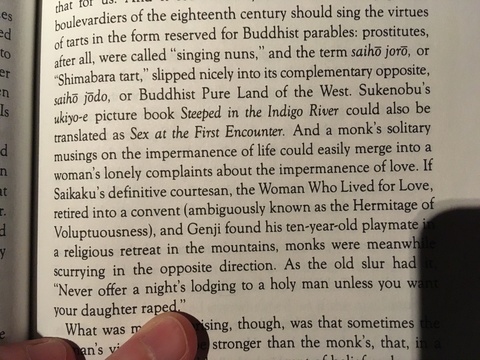