The Silver Chair« an older post
a newer one »The Light Between Oceans
Book Notes kitt decided around 09:14 on 27 December 2017 to publish this: 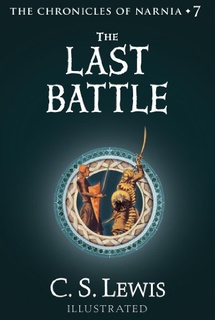 This is Book 7 of The Chronicles of Narnia.

I think this book should have been titled Further Up and Further In to be honest, what with the sixty page denouement after the Last Battle.

The Sledgehammer of Allegorical Christ didn't lessen at all during this book. There are the Dwarves who turned away from God, refusing to believe. There is also the lesson that, welllllllll, if you didn't really know the Christian God, but were good and steadfast and trustworthy, then, hey, whatever god you prayed to was a valid substitute, and you can still come into Heaven.

The ending of this book, though, wow, they all died in the end. Though, really, that's kinda the point, no?

The book was a fast read. I'm happy to have read the series. I'm not likely read it again.

“Kiss me, Jewel,” he said. “For certainly this is our last night on earth. And if ever I offended against you in any matter great or small, forgive me now.”
Page 123

Eustace stood with his heart beating terribly, hoping and hoping that he would be brave. He had never seen anything (though he had seen both a dragon and a sea-serpent) that made his blood run so cold as that line of dark-faced bright-eyed men.
Page 149

Very few troops can keep on looking steadily to the front if they are getting arrows in their faces from one side and being pecked by an eagle on the other.
Page 155

A man who is fighting a dozen enemies at once must take his chances wherever he can; must dart in wherever he sees an enemy’s breast or neck unguarded.
Page 163

But in Narnia your good clothes were never your uncomfortable ones. They knew how to make things that felt beautiful as well as looking beautiful in Narnia: and there was no such thing as starch or flannel or elastic to be found from one end of the country to the other.
Page 167

So, cords are my good clothes? If so, sign me up!

“I wish she would grow up. She wasted all her school time wanting to be the age she is now, and she’ll waste all the rest of her life trying to stay that age. Her whole idea is to race on to the silliest time of one’s life as quick as she can and then stop there as long as she can.”
Page 170

Sums up much of American culture.

“Only I think you and I, Polly, chiefly felt that we’d been unstiffened. You youngsters won’t understand. But we stopped feeling old.”
Page 174

They began eating and drinking greedily enough, but it was clear that they couldn’t taste it properly.

"They have chosen cunning instead of belief. Their prison is only in their own minds, yet they are in that prison; and so afraid of being taken in that they cannot be taken out."
Page 185

Then Jill and Eustace remembered how once long ago, in the deep caves beneath those moors, they had seen a great giant asleep and been told that his name was Father Time, and that he would wake on the day the world ended.
Page 188

This would have been amazing, to see Father Time wake.

This part of the adventure was the only one which seemed rather like a dream at the time and rather hard to remember properly afterward. Especially, one couldn’t say how long it had taken. Sometimes it seemed to have lasted only a few minutes, but at others it felt as if it might have gone on for years.
Page 192

This could be an interesting set of stories surrounding Narnia. A collection of tales about how different Talking Animals and people lived, and ended up heading to Stable Hill at just the right time to enter the Gate at the Ending of the World.

You could see all the rivers getting wider and the lakes getting larger, and separate lakes joining into one, and valleys turning into new lakes, and hills turning into islands, and then those islands vanishing.
Page 195

Where have I read that recently?

The Dogs were still with them. They joined in the conversation but not very much because they were too busy racing on ahead and racing back and rushing off to sniff at smells in the grass till they made themselves sneeze.
Page 198

"Has not one of the poets said that a noble friend is the best gift and a noble enemy the next best?”
Page 200

"For I and he are of such different kinds that no service which is vile can be done to me, and none which is not vile can be done to him. Therefore if any man swear by Tash and keep his oath for the oath’s sake, it is by me that he has truly sworn, though he know it not, and it is I who reward him."
Page 205

If one could run without getting tired, I don’t think one would often want to do anything else.
Page 215

The very first thing which struck everyone was that the place was far larger than it had seemed from outside.
Page 222

“There was a real railway accident,” said Aslan softly. “Your father and mother and all of you are — as you used to call it in the Shadowlands — dead. The term is over: the holidays have begun. The dream is ended: this is the morning.”
Page 228