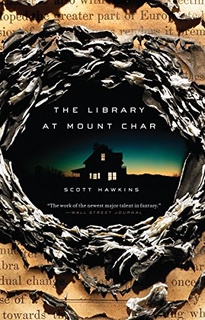 I had zero expectation of liking this book. It came to me recommended by Melissa Urban, of Whole30 fame, on her Instagram account. Not usually one to take a book recommendation from a celebrity, I checked this book out of the library none-the-less. I appreciate Melissa's no-nonsense approach to Whole30 ("drinking your coffee black is. not. hard."), which meant I would give her book recommendations a cautious try. I vaguely recall Melissa recommending another book that I had read and like, so, okay, let's read this one.

This book comes with a giant caveat labelled, "SOME MIGHT FIND THE SCENES IN THIS BOOK DIFFICULT TO READ." Like the ones of people roasting alive (they came back later). Or the various scenes of mental abuse, or the casual killing of a person, or the stealing of a persons mind. Yes, if you have a vivid imagination and active empathy, these are horrific scenes. If you are able to read a book of fiction as a book of fiction, this is a surprising fast, engaging read.

The book follows Carolyn, as we try to figure out what the situation is (her father has disappeared) and how this world operates (not quite like ours, not quite not like ours). Imagine a family outside of time (if they learn the secret to longevity), able to learn the most intricate knowledge (coming back from death, how to communicate with animals, every warfare strategy ever considered or acted upon and which to use when), give them a history that is shrouded in mystery, and a burning hatred for the current situation. Add in someone who can plan for decades, and you'll have this book.

I enjoyed this book, and while I wouldn't "recommend" it (see the caveat above), I can say I was hooked and read this book very quickly. It was puzzling and gross and beautiful and thought-provoking, and really, that's what any reader could want.

“We should do something,” Carolyn said. Her right index finger trembled, just the tiniest bit. “Rachel could find her son. Even if he’s dead, you could—” Jennifer looked at her, surprised. “That’s kind of you, Carolyn.” She shook her head. “It wouldn’t help, though. It never works out the way you would think. The problem with a heart coal is that the memory always diverges from the actual thing. She remembers an idealized version of her son. She’s forgotten that he was selfish, that he enjoyed giving little offenses.
Location: 1,044

Erwin heard gunfire, then screams, then a deep, booming laugh. He felt alive in a way he hadn’t since Afghanistan. His veins were thrumming with energy. He got up and went looking for a gun.
Location: 1,995

“Are you seeing this?” Erwin asked softly. “I think so,” Steve said. “Are you sure about the time?” Ignoring the evidence before his eyes, he was clinging to the notion that maybe this was just a normal sunset.
Location: 4,261

The cogs of her plan were ticking into final alignment. At first she had rejected this approach out of hand. It was too obviously a ploy. Only after deep study had she considered the idea seriously. Father’s texts were adamant about its effectiveness. As illustrated in any number of footnotes, men are almost always 50 to 60 percent dumber in matters involving their crotch. Close proximity enhances the effect. Now, with clinical approval, she saw that something stirred in the depths of David’s tutu.
Location: 4,878

Father’s notes were clear on this topic as well—there were several ways to incapacitate men instantly, but striking them in the crotch was not one of them. It would take a second or two before the real pain hit.
Location: 4,894

“They did experiments,” Erwin said. “Cheney’s guys, trying to figure out what to do with bin Laden. I heard stories. You give somebody a shock like that, it’d be the sum of—well not just every pain you felt, but every pain you possibly could feel. All at once, like.” “Yes.” “And then you froze him? In that moment, exactly?” Steve thought about it for a second, then gave a low whistle. “Why?” Carolyn remembered how the rain ran warm, remembered the salty, coppery taste of Asha’s blood. “Because wazin nyata isn’t enough. Not for him. This, though…I’m pretty sure that it’s the worst thing that ever happened to anyone, anywhere. Ever. I think it’s the worst thing that can happen, the theoretical upper limit of suffering. Despair and agony,” she said. “Absolute. Unending.” “Damn,” Erwin said. “That’s some fucked-up shit.”
Location: 5,077

“That’s the risk in working to be a dangerous person,” she said. “There’s always the chance you’ll run into someone who’s better at it than you.”
Location: 5,284

“Exactly. But here’s the difference. Suffering—normal suffering—is transient. What we perceive as emotion is just a quick connection between three-dimensional space and one of the higher physical planes—rage, joy, pleasure, whatever. The repercussions can echo for years, but the actual link usually only lasts for a fraction of a second.”
Location: 5,645