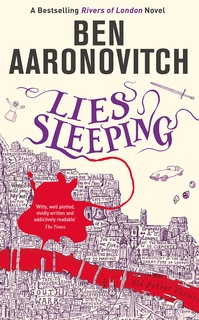 This is book 7 of the Peter Grant series. Pretty sure I have that order correct.

This wasn't one that I was able to switch from written to spoken words easily, I often will switch to audio when I can't be reading a book, then back to the written word as soon as I am able. This one, eh, easily, but that's a good thing, as the story was dense enough to want to read in one go (okay, two go's).

The Faceless Man is back, and Lesley is needed to help out Peter, except she can't, but she can. There are enough twists and references to previous books' scenes that, well, if you haven't started the series, okay now you can start the series, and read all the way to this book (you'll likely catch more subtleties in the details as a result, too).

I'm still enjoying the series. There are graphic novels with the series, too, but I haven't read them, so no comment on them.

You use Protection Command people for this kind of job because unlike SCO19 they’re trained to do guard duty. You want a certain kind of personality who can stand around in the rain for eight hours and still be awake enough to shoot someone in the central body mass at a moment’s notice.
Location: 207

As a police detective—which, by the way, I had officially become just that month—I get to spend a lot of time in people’s houses, often without their consent. Homes are like witnesses. They pretty much lie all the time. But, as Stephanopoulos says, the longer someone lives in a house the more intrinsically interesting the lies become. When you’re police, an interesting lie can be as useful as the truth. Sometimes more so.
Location: 240

When you arrive unexpectedly at someone’s house you go in through the front door, often after making sure you’ve got a couple of mates waiting round the back. For a business, especially the kind that involves big trucks and heavy metal, it’s always better to go in through the back. The customer-facing part of any modern business is purposely designed to be as politely unhelpful as possible. If you go in from the rear, the customer-facing staff are all facing the wrong way and everybody starts their conversation on the back foot.
Location: 551

I suggested the British Museum, not least because it’s possible to lose just about anything in their storage area. They’re still looking for a mummy that went missing in 1933—staff believe it was stolen but Nightingale said he’d always had a sneaking suspicion that it got bored one day and walked away.
Location: 1,119

People are often willing to tell you all sorts of secrets when they’re trying to hide something from you. You should always make a mental note—it may not be your case today but you never know, it might come round later. I asked what else was going on.
Location: 1,996

Have you ever had that sensation, just as you’re going to sleep, that a bomb has gone off inside your head? It’s a real medical phenomena called, I kid you not, exploding head syndrome. It’s what’s known as a parasomnia, which is Greek for “we don’t know either.”
Location: 2,156

“Londinium is next. But Suetonius, the governor, doesn’t fancy his chances so he buggers off with what troops he has and leaves the city to its fate.” I’ve read my Tacitus—I knew what was coming next. “The gentry always buggers off when London’s in danger. Have you noticed that?” he said. “One whiff of the plague, some social unrest, a bit of light bombing and the Establishment’s nowhere to be found.”
Location: 2,229

“So up he sprang. A thing full of hatred and mad laughter, capering through the ashes of the city. Because order did not save his children. Law did not save his wife. And, for all his faith in the gods, they did nothing.”
Location: 2,246

I’ve found that if you voluntarily take on a chore somebody else doesn’t want to do, they don’t check the results too closely—in case they have to do it again themselves.
Location: 3,437

He once told me that the problem was not that criminals were evil but that most of them were pathetic—in the proper sense of the word. Arousing pity, especially through vulnerability or sadness. Recently I’d learned the Greek root: pathetos—liable to suffer. “You’ve got to feel sorry for them,” he said. And you didn’t have to be in the job long to see what he meant. The addicts, the runaways, the men who were fine unless they had a couple of drinks. The ex-squaddies who’d seen too much. The sad fuckers who just didn’t have a clue how to make the world work for them, or had started so beaten down they barely learned to walk upright. The people who shoplifted toilet paper or food or treats for their kids. “This is a trap,” he’d said. “You’re not a social worker or a doctor. If people really wanted these problems solved there’d be more social workers and doctors.” I’d asked what we were supposed to do. “You can’t fix their problems, Peter,” he’d said. “Most of the time you can’t even steer them in the right direction. But you can do the job without making things worse.”
Location: 3,611

Which is just as well, as I ran straight into Chorley coming the other way. I was half blind and he was looking over his shoulder—it was one of them meeting engagements that military theorists suggest you should never ever do if you can help it. He didn’t spot me until we were less than three meters apart.
Location: 3,979

“A romantic,” said Nightingale. “The most dangerous people on earth.”
Location: 4,089

So in I went clutching my Domestos and my spray bottle of generic own-brand surface cleaner and got on with it. Pausing a couple of times to throw up while I did.
Location: 4,147

Sometimes you’ve got to go hard to get the job done. Although not always in the way that people are expecting.
Location: 4,149

The whole of my left side from shoulder to knee went numb, in that worrying numb-now pain-later way of a major injury, and the air was literally knocked out of my body. I was trying to breathe in but it felt as if my lungs were paralyzed. Then I coughed. It hurt, then I breathed in—it was wonderful.
Location: 4,387