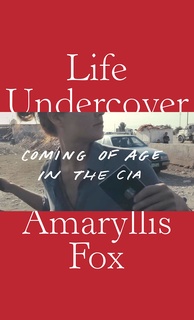 Terrorism is a psychological game of escalation. It’s not the last attack that scares people. It’s the next one.
page 7

Dad comes with us on outings now and then, but mainly we see him back at home in his flat in the evenings. He moved into the place when he got tired of staying in a hotel, but he hasn’t done much with it except line every wall with books
page 25

The sting begins to fade from my idea of him. Would I stand up to the military in my own country? Or would I go along to survive, once they proved beyond sufficient doubt that resistance meant death or worse for my mother, my sisters, my father, my brother? I realize in the dimness of the compartment that I have no way to answer. We talk with certainty while our lungs are filled with freedom, but it’s harder here, in this suffocating place, to be sure we’d all fight back. At the beginning, maybe, when victory seems possible and it’s only our own skin we risk. But after the claw has closed tight around the throats of those we love? Of that I can’t be sure. And in the staleness, I feel the minder’s despair, choosing between slavery and death.
page 43

When the minder is with us, the threat has a form. Without him, it becomes a nebulous, all-powerful force. Empty doorways and shapes among the shadows.
page 50

Ants flee the stomping boot of power. Until, one day, they don’t.
page 127

I’ve started playing a game with myself to see how long I can go without lying to a target. Withholding information is unavoidable—for their security as well as mine—but I’ve gotten pretty good at avoiding outright falsehoods. In part, it’s just the challenge of it that appeals to me—the wordplay involved. But increasingly, I’ve found that it forces me to search for some shred of shareable truth instead of settling for a convenient story. Truth casts a powerful spell, cements a bond between speaker and recipient that holds us somehow, one to the other, as we wade into deeper water
page 141

Like anyone else, assets want to be a part of something important, want their lives to have meant something, want to build some legacy, secret or not, to keep the terrors of mortality and insignificance at bay. That’s a vulnerability all humans share. And it’s the one I’ve found propels some of the most courageous and significant work any asset—or person—can do.
page 145

In the midst of the dust and heat and noise, there are the recognizable patterns of everyday existence. The unremarkable passing of a day that makes life everywhere so beautiful.
page 199

And I remember the little sign in my neighbor’s front yard when I was a kid. It said, “Planting a garden is the ultimate act of faith in tomorrow.”
page 211

As operations ramp back up, Dean senses the shift in me, bristles at my quiet mention that a situation might be more complicated than it seems. Drone killings and enhanced interrogation become subjects of dread on the operations we plan in tandem. Each time I opt for a different choice, he takes it personally, a critique of his tradecraft, a rebuttal to his way of life, an abandonment of him. I find that building trust simply works better than exerting force. Detention simply works better than assassination. They are pragmatic decisions, the fastest, cheapest, most reliable way to save lives and prevent attacks.
page 215

People pretend in the real world just as much as in the spy world, she says. They pretend because the stakes are the same—the stakes are not getting hurt. Sure, in my old world the harm was a suitcase nuke in Times Square, but who’s to say the scorn of a lover isn’t as powerful a weapon? Problem is, she points out, the cost of the armor is the same, too
page 220

I think of my old boss and his Mideast negotiations—remember asking him how our allies can give us something we won’t tell them we lack. Turns out, the same goes for friends. And spouses. And moms.
page 221