Feast of the Drowned« an older post
a newer one »Book of Joe
Book Notes Instead of being asleep at 10:30 on 2 August 2015, kitt created this: 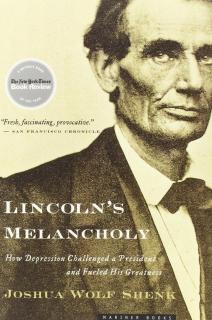 Okay, I'm really not sure what took me so long to read this book. The subtitle of this book is How Depression Challenged a President and Fueled His Greatness, so it's basically about Lincoln and how he lived with depression.

The book describes how depression, also known as the manly "melancholy" of yesteryear (yester-century?), was viewed in the 1800s (much, much differently than it is these days); how friends and family rallied around a melancholic person to help; how being sad wasn't considered a failing, it was considered different. Talk about a different viewpoint than these days, where if you're not happy, there must be something wrong with you. I liked the one point in the book where the theory that happy people are actually the unbalanced ones: they have an over-inflated sense of self and their skill-sets, versus depressed people who have a more grounded realistic view of reality.

About half way through the book, I liked it enough to buy a hard copy of the book. It helps that I'm a fan of Lincoln, I suspect. But really, there are enough good quotes in the book that I wish I had it right now to copy them all down right here.

Lincoln had depression. He had chronic depression. He didn't beat it, he lived with it. According to Shenk, there were two major episodes and a resignation after those that Lincoln had to a lifetime of suffering. Many of the questions Lincoln asked himself in letters are ones that many depressives ask themselves. That Lincoln had a calling so strong that he kept going is another example of how having a life goal, a calling, a desire for a legacy, can make the suffering bearable for people with depression.

I plan on reading the book again, possibly before the end of the year, I liked it that much.

Thanks for the recommendation

Thanks for the recommendation. I have also suffered from 'melancholy'. This will be added to my must read list.