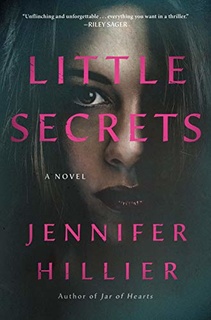 This book is on the Best Books of 2020 so far, which is how it came into my awareness. Usually, I shrug off these lists, but this one caught my attention, I don't know why. I do know that it was available at the library and, despite being 7th on my to-read list, I read it over the following two days, zipping through it faster than even I expected.

The Book Riot description is: "Marin Machado had the kind of life other people envied…right up until it became a nightmare. While shopping at Pike Place Market, her son was abducted in the mere seconds it took for her to accept a phone call. A year later, a private investigator rocks Marin’s world with a devastating blow, but it’s not the one she expected: her husband has been cheating. Willing to do whatever it takes to salvage what’s left of her family, Marin goes to dark lengths she never realized she was capable of. Along the way, she discovers her husband might be keeping a bigger secret than his mistress: He might know what happened to their son."

What the description doesn't convey very well is just how well the anguish of losing a child is conveyed. Also not conveyed very well is just how well Hillier demonstrates the slippery slope any of us can slide down when we are in pain, when we are blinded by our biases, when each step isn't that much different than the last until you turn around and see just how far you've fallen.

The book is a fast, good read with a twist that makes you think, "Oh! Didn't see that coming." I was expecting a twist (that (spoiler) J.R. is Justin, he is not (sorry if you're reading this in an RSS feed and that spoiler displayed)), and was amused I was wrong, but delighted about the actual plot twist.

If you like psychological thrillers, this qualifies and is recommended. The suspension wasn't so bad that I skipped to the end, but it was close. If you want a beach book, grab this one. If you want some deep philosophical manifest, look elsewhere, this is brain candy.

“I don’t know what to do. I don’t know if I can even get angry. We haven’t had sex in two years. Shit, maybe three, I can’t even remember the last time. If I bring it up, he’s gonna deny it. And we’re gonna fight. God, I am so sick of fighting.” “You’re married,” Frances says sharply. “Sex with someone else is never part of the deal, I don’t care how long it’s been.” “Men do have needs, though,” Simon says. “Don’t be a douche.” Frances reaches over and smacks him on the thigh. Marin’s glad she did, because she would have punched him.
Location: 390

Hope lasts only so long, can carry you only so far. It’s both a blessing and a curse. Sometimes it’s all you have. It keeps you going when there’s nothing else to hold on to. But hope can also be terrible. It keeps you wanting, waiting, wishing for something that might never happen. It’s like a glass wall between where you are and where you want to be. You can see the life you want, but you can’t have it. You’re a fish in a bowl.
Location: 479

Marin is not going to die today, no matter what this feels like.
Location: 659

Who would have thought that who you love and who you feel safe with might not be the same person?
Location: 1,227

In the beginning, Kenzie found it exciting. Affairs always are at first.
Location: 1,970

Married men are exhausting. They have a way of sucking all the oxygen out of the room when you’re with them. You’re always on their schedule, on guard for changes in locations and times to meet. There are only specific places you can go, and only for so long before there’s somewhere else they have to be. Their families are their priorities. And you’re not family. You’re the side piece. You’re the one who’s there to fill in the holes. Your voice is less than.
Location: 1,972

He understands better than any guy she’s ever known how to apologize properly, and that a good apology involves an acknowledgment of the shitty thing he did, along with a clear understanding of how said shitty thing affected the other person.
Location: 2,072