The Great Influenza« an older post
a newer one »The Space Between Worlds
Book Notes kitt decided around 12:15 on 7 August 2020 to publish this: 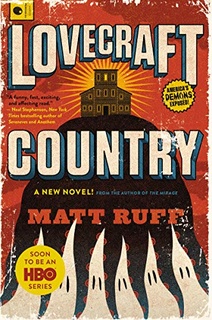 While sitting at the dining table at Chez Oliphant, Claire and I started talking books. I suspect we started talking about books because I was lamenting not having any good road trip books, and I was about to start a four day road trip. Well, for solo road trip books, Claire has some great recommendations. This one came out because I had recommended the Dread Nation sequel (zombies!), and Claire countered with Lovecraft, or rather Jim Crow South with Cthulhu. Go on...

Turns out, while there are elements of Lovecraft in the book, the book is more an homage to Lovecraft than a Lovecraftian fan-fic. It reads like a serial, with eight separate stories, each tangentially related to the others, told in sequential order, each with different characters as the focus. There is an over-arching plot, which works very well with the satisfying ending (good guys win! rah!). The Jim Crow parts were uncomfortable reading and that is likely the point. One of the stories didn't interest me at all, but the uncomfortable parts relating to abuse of power were worth sticking with.

I think Claire's review sums up the book well: "White people were all, 'Gasp! Ghosts???' and the black people were all, shrug 'Ghosts. Sure, okay.'" The Wikipedia article sums up the individual stories well. If you like urban fiction with a hint of Lovecraft, and want to sit with racial difficulties (yes, you do), this is a great book to pick up. So great that it is a mini-series. I suspect the book is better, but haven't seen the show, so don't know.

[Burroughs ...] whose protagonist John Carter had been a captain in the Army of Northern Virginia before becoming a Martian warlord. “A Confederate officer?” Atticus’s father had said, appalled. “That’s the hero?” When Atticus tried to suggest it wasn’t that bad since technically John Carter was an ex-Confederate, his father scoffed: “Ex-Confederate? What’s that, like an ex-Nazi? The man fought for slavery! You don’t get to put an ‘ex-’ in front of that!”
Page: 12

Atticus’s shared devotion to these mostly white-authored genres had been a source of ongoing struggle with his father. George, as Montrose’s older brother, was largely immune to his scorn and could always tell him to keep his opinions to himself. Atticus didn’t have that privilege.
...
Montrose could have simply forbidden him to read such things. Atticus knew other sons whose fathers had done that, who’d thrown their comic books and Amazing Stories collections into the trash. But Montrose, with limited exceptions, didn’t believe in book-banning. He always insisted he just wanted Atticus to think about what he read, rather than imbibing it mindlessly, and Atticus, if he were being honest, had to admit that was a reasonable goal.

But if it was fair to acknowledge his father’s good intentions, it also seemed fair to point out that his father was a belligerent man who enjoyed having cause to pick on him.

Uncle George wasn’t much help. “It’s not as if your father’s wrong,” he said one time when Atticus was complaining.

“But you love these stories!” Atticus said. “You love them as much as I do!”

“I do love them,” George agreed. “But stories are like people, Atticus. Loving them doesn’t make them perfect. You try to cherish their virtues and overlook their flaws. The flaws are still there, though.”

“No, that’s true, I don’t get mad. Not at stories. They do disappoint me sometimes.” He looked at the shelves. “Sometimes, they stab me in the heart.”
Page: 12

“You hope,” said Abdullah. “What if he sees through you? Or what if he buys it, but decides to hang on to your great-grandma’s book until you find the real secret room?”

It was nothing Ruby hadn’t heard, or overheard, a million times before. But there was a difference between having people talk about you, or at you, and having them talk to you, believing you were one of them and expecting you to think as they did.
Page: 249

“But you’re right, we are going to need a leader. I won’t insult you by pretending I don’t have an idea who that leader should be. And if there were a living descendant of Titus Braithwhite, and if I thought by trotting him out I could sway some of you to my point of view, well, I’d be tempted. But the problem with appeals to authority is that they’re ultimately subjective. One man’s honored tradition is another’s superstition—and that’s where the knives come out."
Page: 257

It keeps me safe. So he knew his Bible, at least. Ruby recalled another white boy she’d been with briefly, Danny Young, who one day had begun expounding on a theory he had, that the mark God put on Cain was actually dark skin and that everything bad that had befallen the Negroes—slavery, lynching, Jim Crow—was a result of their being Cain’s descendants. You’d be a better Christian if you learned how to read, Ruby had told him. Cain’s mark was a protection; if the mark was his skin color, then God must have turned him white, not black.
Page: 260

“He thanked me for the warning,” said Landsdowne. “The way men do, when they don’t intend to heed it."
Page: 281