The Secret Garden« an older post
a newer one »The Lion, the Witch, and the Wardrobe
Book Notes Posted by kitt at 21:00 on 28 November 2017 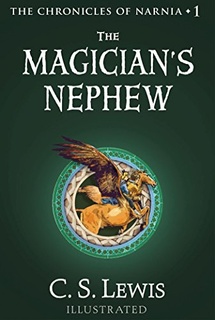 This is Book 1 of The Chronicles of Narnia.

Continuing my fixing-my-lack-of-classics-reading-as-a-teen non-prolbem, I started the Chronicles of Narnia. Except, I thought The Lion, The Witch, and the Wardrobe was the first book, checked it out of the library, then was stunned when I read it was book two of the series.

I'm unsure if I have read this book before. I didn't think I had, but multiple parts of it were familiar, leading me to believe I had. I spent much of the book pondering the allegorical elements, teasing out the parallels between the story and the Bible. I found, however, that what enjoyed the most was pausing to reflect on the characters' motivations, including both character flaws and human traits. The aversion to loss is universal, especially of a loved one. People are motivated to do awful things, but can also be incentivized towards doing the right thing, both of which are present in the book.

The book is quick two hour read. I suspect most of these books in the series will be. In line with my policy of reading a series if I enjoy the first one, and don't stop until two bad ones in a row, no, wait, I'm reading the whole series, so on to the next one!

I enjoyed the book. I would have liked to have a 10 year old kid with me in a book club reading this book to hear her perspective.

And both felt that once the thing had been suggested, it would be feeble not to do it.
Page 9

Cracking up with this. How many times has something disastrous happened because a person couldn't back down? Oh, I shouldn't NOT do this, since you suggested it.

"But of course you must understand that rules of that sort, however excellent they may be for little boys—and servants—and women—and even people in general, can’t possibly be expected to apply to profound students and great thinkers and sages. No, Digory. Men like me, who possess hidden wisdom, are freed from common rules just as we are cut off from common pleasures. Ours, my boy, is a high and lonely destiny."
Page 21

And this is the "I'm better than you" attitude that is incredibly prevalent in human nature.

“All it means,” he said to himself, “is that he thinks he can do anything he likes to get anything he wants.”
Page 21

And this is the typical response from everyone else to that attitude.

"You don’t understand. I am the great scholar, the magician, the adept, who is doing the experiment. Of course I need subjects to do it on. Bless my soul, you’ll be telling me next that I ought to have asked the guinea-pigs’ permission before I used them! No great wisdom can be reached without sacrifice. But the idea of my going myself is ridiculous. It’s like asking a general to fight as a common soldier. Supposing I got killed, what would become of my life’s work?"
Page 26

This is pretty much how I believe every leader who is unwilling to either go into war or send his own child into war is. "I will send YOUR child, but not mine." "I will ask YOU to make the sacrifice I refuse to make."

"I hope, Digory, you are not given to showing the white feather."
Page 27

I had to look this one up:

"A white feather has been a traditional symbol of cowardice, used and recognised especially within the British Army and in countries of the British Empire since the 18th century, especially by patriotic groups, including some early feminists, in order to shame men who were not soldiers. It also carries opposite meanings, however: in some cases of pacifism, and in the United States, of extraordinary bravery and excellence in combat marksmanship.

"This was the old banqueting hall where my great-grandfather bade seven hundred nobles to a feast and killed them all before they had drunk their fill. They had had rebellious thoughts."
Page 62

Huh. George R.R. Martin wasn't the first person to think of butchering at a feast.

Hate this. Blaming others for your own actions. Right.

"It had long been known to the great kings of our race that there was a word which, if spoken with the proper ceremonies, would destroy all living things except the one who spoke it."
Page 66

Well, you know how it feels if you begin hoping for something that you want desperately badly; you almost fight against the hope because it is too good to be true; you’ve been disappointed so often before.
Page 92

I know this well.

For what you see and hear depends a good deal on where you are standing: it also depends on what sort of person you are.
Page 136

Now the trouble about trying to make yourself stupider than you really are is that you very often succeed.
Page 137

Laughing! Yes. Welcome to the willful ignorance of the United States.

It was even better than yesterday, partly because everyone was feeling so fresh, and partly because the newly risen sun was at their backs and, of course, everything looks nicer when the light is behind you.
Page 168

Unless you're taking a picture, then no one looks good.

“I don’t know that I care much about living on and on after everyone I know is dead. I’d rather live an ordinary time and die and go to Heaven.”
Page 175

“Sleep,” he said. “Sleep and be separated for some few hours from all the torments you have devised for yourself.”
Page 185

Things always work according to their nature. She has won her heart’s desire; she has unwearying strength and endless days like a goddess. But length of days with an evil heart is only length of misery and already she begins to know it. All get what they want; they do not always like it.”
Page 190

And Digory could say nothing, for tears choked him and he gave up all hopes of saving his Mother’s life; but at the same time he knew that the Lion knew what would have happened, and that there might be things more terrible even than losing someone you love by death.
Page 191

You’ll find they usually go on getting worse for some time; but when things once start going right they often go on getting better and better.
Page 199

After about six weeks of this lovely life there came a long letter from Father in India, which had wonderful news in it. Old Great-Uncle Kirke had died and this meant, apparently, that Father was now very rich. He was going to retire and come home from India forever and ever.
Page 199

One person's tragedy is another person's blessing. The hardest thing about death is that life goes on.