Beloved« an older post
a newer one »Rita Hayworth and Shawshank Redemption
Book Notes Yeah, kitt finished writing this at 19:34 on 20 January 2018 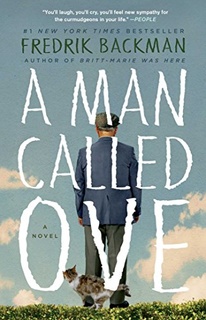 When I had finished Beartown, Mom and I talked about the book, about how I found it difficult to read once The Conflict Event happened. Mom suggested that I read "A Man Called Ove" next, then, as the book was by the same author, Fredrik Backman, and it wasn't as heavy. I had a few other books lined up, but picked it up this week.

I enjoyed this book. It made me cry. I was honestly confused why my mom would suggest a book about a man whose wife had passed away and the grief surrounding that, knowing the sorrow and depression and stress I'm having now in my life, but was willing to trust her, because she is my mom, and the world is always going to be okay when your mom is holding you as you cry.

And yes, I cried a few times while reading the book. I wouldn't expect most people to cry when reading it, though. A few moments struck home, and so, yeah, I thought, sure, crying is fine right now, so I did.

A Man Called Ove (pronouced oooo-vay) has been made into a movie. I'll likely watch it, then complain the book was better. Just as Ove would have.

Also drives an Audi, Ove has noticed. He might have known. Self-employed people and other idiots all drive Audis.
Page 10

I giggled at this, but only because my car is an Audi.

It was more an argument where the little disagreements had ended up so entangled that every new word was treacherously booby-trapped, and in the end it wasn’t possible to open one’s mouth at all without setting off at least four unexploded mines from earlier conflicts.
Page 81

I am sad that this is the way of several of my relationships.

But Sonja would not have been Sonja if she had let the darkness win.
Page 202

“We can busy ourselves with living or with dying, Ove. We have to move on.”
Page 202

"Get busy living, or get busy dying." -- Shawshank Redemption

Has never liked the feeling of losing control. He’s come to realize over the years that it’s this very feeling that normal folk like and strive for, but as far as Ove is concerned only a complete bloody airhead could find loss of control a state worth aiming for.
Page 215

She married him. And now he doesn’t quite know how to carry on without the tip of her nose in the pit between his throat and his shoulder.
Page 215

In the other direction, I don't quite know how to carry on without the smell of him.

Maybe their sorrow over children that never came should have brought the two men closer. But sorrow is unreliable in that way. When people don’t share it there’s a good chance that it will drive them apart instead.
Page 246

Sometimes it is difficult to explain why some men suddenly do the things they do. Sometimes, of course, it’s because they know they’ll do them sooner or later anyway, and so they may as well just do them now. And sometimes it’s the pure opposite—because they realize they should have done them long ago. Ove has probably known all along what he has to do, but all people at root are time optimists. We always think there’s enough time to do things with other people. Time to say things to them. And then something happens and then we stand there holding on to words like “if.”
Page 282

But we are always optimists when it comes to time; we think there will be time to do things with other people. And time to say things to them.
Page 287

It is difficult to admit that one is wrong. Particularly when one has been wrong for a very long time.
Page 305, repeated on page 309

Something inside a man goes to pieces when he has to bury the only person who ever understood him. There is no time to heal that sort of wound.
Page 325

And time is a curious thing. Most of us only live for the time that lies right ahead of us. A few days, weeks, years. One of the most painful moments in a person’s life probably comes with the insight that an age has been reached when there is more to look back on than ahead. And when time no longer lies ahead of one, other things have to be lived for. Memories, perhaps.
Page 325

Love is a strange thing. It takes you by surprise.
Page 326

Yup. You complained the book

Yup. You complained the book was better. ;-) (but the movie was good. it made me cry.)