Confederacy of Dunces« an older post
a newer one »Name of the WInd
Book Notes Written with a loving hand by kitt some time around 20:14 on 2 December 2016

Book 1 of the Secret Histories series. 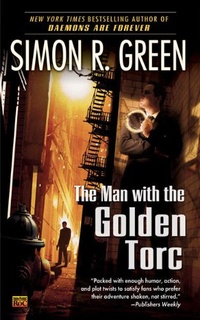 I enjoyed the Nightshade series by Simon R Green, so when Amazon suggested this book, I figured it would be a fun read.

Of course, I didn't realize that the series was already like twelve books long.

This book is a fun read. It's about Eddie Drood, of the Drood family, the secret entity protecting the world. Each member of the Drood family wears a gold-colored torc, a rigid "neck ring" made of metal, designed to be worn permanently. Wikipedia has a better description of torcs. The torc has the magical abilities to give its wearer extraordinary strength, protection from injury, and near impenetrability.

The book starts out with Edwin being given a task by the Matriarch of the family, after Edwin describes just how much he hated growing up in the family. Family is family, so he accepts the task offered, and is subsequently attacked by legions of enemies. He spends the rest of the book figuring out WTH is going on. In the middle of it, he finds Molly, and together they continue to figure out what is going on.

Like all modern fairy tales, OF COURSE they figure out what's going on.

I enjoyed the book, even if I guessed wrong on the true purpose of the Matriarch's task. I thought it was to take out the Drood family's strong enemies. It wasn't. Still, a fun read.