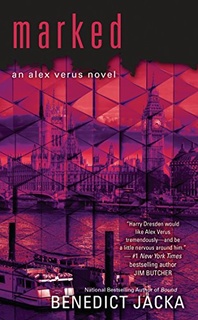 I'm a big Alex Verus by Benedict Jacka fan. I found the books on the recommendation of Jim Butcher on some tweet years and years ago, and have been enjoying the Verus series, reading each one pretty much as soon as it is published. I appreciate that Jacka delivers his books very regularly, which means I'm not waiting for a series to continue as the world is with Harry Dresden and the Song of Ice and Fire and the Kingkiller Chronicle (which I am now convinced Rothfuss doesn't know HOW to finish, so he won't) and whatever else books have the author off on a different tangent because that's what interests them at this time and oh, wow, do I appreciate Jacka.

I enjoyed this book. I have enjoyed this series. Two chapters into this book and I realized that reading it felt like coming home in a way, the comfort level of the world that has been developed, my connection with said world and the characters in the world, and the writing style of the author. The Dresden Files does this, too. As did Connolly's Twenty Palaces series.

And I just realized I seem to have a thing for white male author, urban fantasy fiction.

Good thing I'm on a non-fiction kick this year. Go me.

The book was a fun read. If you haven't started on the Verus, start with book one, which is Fated (the naming of which reminds me to add it to my "I have read, but I don't recall when or any of the plot, but I know I've read it" list). Once you're done with those, head over to the Dresden series. And keep reading.

There’s a rhythm to battle, a cadence, almost like a dance. Every move has its counter, every strike its timing. Once you understand it, it doesn’t feel as though you’re attacking at all: you just do what’s natural.
Page 8

Some of the younger men in his profession, the ones who have something to prove, will ignore warnings like that. The ones who survive to Little’s age don’t.
Page 10

“However, justice must not only be done, but be seen to be done."
Page 27

“None of the tests were able to find anything,” I said. “But not finding anything doesn’t mean there’s nothing there."
Page 43

"It’s a matter of personality, not what you feel you need, and you simply don’t have enough of a desire to dominate and control.”
Page 48

Yeah. I understand this.

“Everyone has aggressive impulses,” Dr. Shirland said. “They’re a fundamental part of the human condition. If you meet someone who seems not to have any, they’re channelling them somewhere else or keeping them suppressed. Usually, in the latter case, it ends up turning inward and manifesting as depression."
Page 55

"She’s been a little too isolated lately and I don’t think leaving her alone with the contents of her own head for company is a good thing.”
Page 56

I know a few people that this could be applied to, too.

I’ve never lived a safe life and I’ve always accepted that, but it’s one thing to know that there’s a good chance you’re going to die a violent death, and it’s something else to know that it might be someone else doing the dying in your place.
Page 59

"Sure, they’ll offer you protection — as long as you do as you’re told. But as soon as you stop, they’ll make a point of targeting you, just to send the message of what happens to other people who don’t get in line. It’s not getting into those sort of groups that’s the problem, it’s getting out.”
Page 64

You build an army because you’re planning to fight someone.
Page 66

... and the less we knew and trusted each other, the more “harder” shaded into “impossible.”
Page 69

... one of the more useful concepts I’d picked up was the Eisenhower Matrix, a method of ordering tasks by importance and urgency. The idea is that you file every task into one of four quadrants: important and urgent; not important but urgent; important but not urgent; and neither important nor urgent. Depending on which of those four a task is in, you do it, delegate it, schedule it, or ignore it.
Page 74

Rulers don’t like turning on their own if they can avoid it. It gives the common folk ideas.
Page 82

"... If there’s one thing the Council can agree on, it’s that their power and privileges shouldn’t go to anyone else.”
Page 92

I judged him to have potential. Unfortunately power can be a discouragement to growth, and he’s had difficulty adapting.
Page 97

There was another pause. There’s a lot of waiting in battles: when one wrong move can get you maimed or killed, people are understandably reluctant to make hasty decisions.
Page 110

It hadn’t been my fight... but then, that’s how people like Pyre always keep getting away with it, isn’t it? The ones who can stop them won’t, and the ones who want to stop them can’t.
Page 117

“The number one rule when you’re dealing with Dark mages is that you have to negotiate from a position of strength,” I said. “The worst thing you can do is make them think you’re weak. If I don’t have the authority to settle terms, then in their eyes, that automatically makes me weak. And by implication, that makes you weak.”
Page 124

“Don’t people always think that every long-lived institution is immortal right up until the point where it falls apart?”
Page 172

Dragons can tell you your future, after a fashion. But I’ve never known whether they tell you what’s going to happen, or whether hearing it from them is what causes it to happen.
Page 177

Vari’s answer was that everyone has a reason. And when I thought about it, he was right. It’s not like anyone just wakes up one morning and thinks, ‘Hey, you know what, I feel like being a bad guy today.’ Everyone’s got some way to justify what they do. They’ll say that the other guy’s an asshole, or they don’t have any choice, or it’s not like it matters, or it’s just the way the world works, whatever. The point is, knowing why someone’s after you doesn’t really help.
Page 252

I couldn’t change what I’d done. But I could learn from my mistakes.
Page 309