The Girl From The Well« an older post
a newer one »The Curious Incident of the Dog in the Night-Time
Book Notes Posted by kitt at 18:48 on 9 November 2017 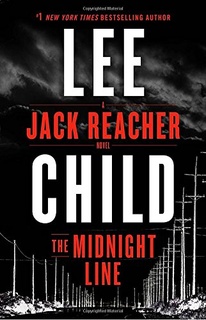 When this book dropped, I pinged Mom to let her know the next Reacher book was out. I'm not sure if she's still reading the Reacher books, but I am (just not watching the movies what a HORRIBLE casting, Cruise? MF so f'ing wrong, let me list the ways: not 6'5" even in lifts, not built like a line backer, not charismatic enough, too much hair, and did I mention not 6'5" built like a f'ing truck?).

I was surprised at how much I enjoyed this one. Half way through I pinged Mom to let her know that even if she had stopped reading the Reacher books, this was a good one worth reading. Because it is. It didn't have the obvious plot holes, it didn't give a bunch of stuff away, you aren't saying LOOK RIGHT OVER THERE, the action moves along, and Child got many of the elements of addiction just right.

Getting hit was a rare event for Reacher. And he intended to keep it rare. Not just vanity. Getting hit was inefficient. It degraded future performance.
Page 23

“How frequently do you move around?”

“Do you think that’s a fitting way for a West Pointer to live?”

“We fought for freedom. This is what freedom looks like.”
Page 57

“That’s all we’ve got. You think she went back there?”

“Depends,” Reacher said. “For some people, home is the first place they go. For others, it’s the last. What was she like?”

"She was pretty close to outstanding, without ever quite getting there. Never in the top five, always in the top ten. That kind of person."
Page 60

Teddy Roosevelt, Reacher supposed, not Franklin. The great naturalist, except for when he was shooting things like tigers and elephants. People were complicated.
Page 105

“You took a risk coming here.”

“Getting up in the morning is a risk. Anything could happen.”
Page 122

"She never said what she was doing. They could go three months without talking.”

“Is that usual for twins?”

“Twins are siblings, same as anyone else.”
Page 124

He propped himself on the pillow and watched his reflection in the mirror on the opposite wall. A distant figure. One of those days. Not just a military thing. Plenty of other professions felt the same way. Sometimes you woke up, and you knew for sure, from history and experience and weary intuition, that the brand new day would bring nothing good at all.
Page 224

“I’m on the inside looking out. I can’t see myself. Sometimes I forget.”

“What did the shrinks say?”

“Deal with it,” Reacher said. “It happened. It can’t un-happen. Most folks aren’t going to like it. Deep down humans haven’t been modern very long. But some won’t care. You’ll find them.”
Page 365