Saturn Run« an older post
a newer one »Moon Over Soho
Book Notes Yeah, kitt finished writing this at 19:08 on 9 September 2018 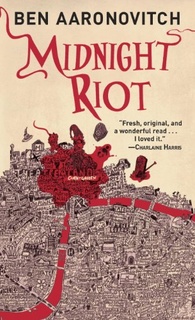 This is book 1 of the Peter Grant series. Finally, a wizard who isn't named Harry. No, wait. Finally a wizard series not in Chicago. No, wait. I give up, it's a wizard in London, not Potter, not Verus, not Harry, but loads of fun, and I am wonderfully delighted to find another modern-day, urban-fantasy, adult wizard series. This book was recommended on micro.blog, as the Rivers of London, which is the English title of this book. I thought, "Eh? Adult wizard not named Harry? Sign me up!"

I enjoyed this book enough to immediately check out book two from the library. I was planning on reading a few other books before reading the second one, but enjoyed this one enough to skip over the carefully curated to-be-read pile and read that one, too.

Right, so, this book.

Peter Grant is a a sucky cop in London. He happens to have a whiff of wizardly talent, which makes him qualified for an apprencticeship in the supernatural branch of the London police. He rather sucks at being a detective, missing a lot of details around him and being generally oblivious to much around him, but seems to do okay as a cop, with his size and such. His partner, a woman, however, is a fine detective, but has to work twice as hard to be seen as half as good.

Anyway, Grant has a bit of wizarding in him, and is recruited, with his training actually being difficult. Imagine that, wizarding powers that take some effort and a lot of hard work, over the course of weeks and months and years, to build up. IMAGINE THAT.

I'm glad there are seven books (so far!) in the series. It's going to be difficult not to read through all of them in one sitting.

This is why you have procedure, training and drill, so that you do things when your brain is too shocked to think for itself—ask any soldier.
Page 47

The window over the stairs had had sheets of black construction paper crudely taped over to block the sunlight.
Page 98

Nightingale said that everything was true, after a fashion, and that had to include vampires, didn’t it? I doubted they were anything like they were in books and TV, and one thing for certain, they absolutely weren’t going to sparkle in the sunlight.
Page 98

Despite what you think you know, most people don’t want to fight, especially when evenly matched. A mob will tear an individual to pieces and a man with a gun and a noble cause is happy to kill ever so many women and children, but risking a fair fight—not so easy.

That’s why you see those pissed young men doing the dance of “don’t hold me back” while desperately hoping someone likes them enough to hold them back. Everyone is always so pleased to see the police arrive, because we have to save them whether we like them or not.
Page 143

Magic, as Nightingale understood it, was generated by life. A wizard could draw on his own magic or on magic that he’d stored by enchantment, which sounded interesting but not relevant to exploding cash tills. However, life protected itself, and the more complex it was, the more magic it produced, but the harder it was to draw off. “It’s impossible to draw on magic from another human being,” said Nightingale. “Or even a dog, for that matter.”
Page 154

Even at closing time, Covent Garden was packed; the post-performance crowd was emerging from the Royal Opera House and looking for somewhere to have a bite to eat and a pose, while clusters of young people on school-sponsored holidays from all over Europe exercised their time-honored right to block the pavement from one side to the other.
Page 161

My dad had once told me that the secret to a happy life was never to start something with a girl unless you were willing to follow wherever it leads.
Page 172

Sometimes when someone tells you not to go somewhere, it’s better not to go there.
Page 189

The tube is a good place for this sort of conceptual breakthrough because, unless you’ve got something to read, there’s bugger all else to do.
Page 189

The trouble with the old boy network is you can never be really sure whether it’s switched on or not and whether it’s operating in your interest or some other old boy’s.
Page 204

Sometimes you have to stand still and take the first blow, that way you see what the other man has in his hand, expose his intentions and, if that sort of thing is important to you, put yourself unequivocally on the right side of the law. And if the blow is so heavy that it puts you down? That’s just the risk you have to take.
Page 204

“How fast can you move something?” said Seawoll.

“Really,” said Stephanopoulos. “How fast is that?”

“Three hundred and fifty meters per second,” I said. “For a modern pistol. Higher for a rifle.”

I looked at Seawoll and he gave me the “at last he wakes up” look so beloved of teachers, senior detectives and upper-middle-class mothers.
Page 207

There we continued the time-honored tradition of brazenly lying through our teeth while telling nothing but the truth.
Page 210

“The Fire Brigade are sailors?”

“Not now,” she said. “But in the old days, when they were looking for disciplined guys who knew about water, ropes, ladders and didn’t freak out at altitude. On the other hand, you had a lot of sailors looking for a nice steady career on dry land—marriage made in heaven.”

Beverley laid her head on my shoulder. Her hair was wet, but I wasn’t complaining. “Sailors are superstitious,” she said. “Even the religious ones know you got to have a little respect for the King of the Deeps.”
Page 256

“It’s not that I’m scared of commitment,” I said to the ceiling. “It’s just that I want to know what I’m committing to first.”
Page 264

“Was that part of the deal?” I asked.

“Apparently so,” said Dad. “Your mum thought it was, when I told her. She said that only a fool expects to get something for nothing.” That sounded like Mum, whose principal saying was, “If it doesn’t cost something it isn’t worth anything.” Actually her principal saying was, at least to me, “Don’t think you’ve got so big that I can’t still beat you.” Not that she ever beat me, a deficiency that she later blamed for my failure to pass my A-levels.
Page 267

“You must,” I said. “That’s the mark of true greatness in an actor—knowing, down to the precise moment, when to make his exit.”

“How wise of you, Peter,” said Henry Pyke. “That is the true mark of genius, to give oneself to one’s public, but to retain that private side, that secret space, that unknowable …”

“To leave them wanting more,” I said trying to keep the desperation out of my voice.