The Math of Life and Death« an older post
a newer one »Midnight Taxi Tango
Book Notes kitt decided around 20:09 on 24 November 2020 to publish this: 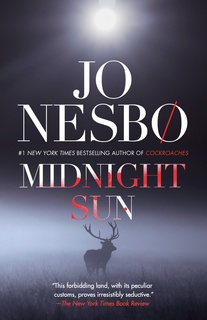 This book was slightly confusing at first, as it is the second book of the Blood on Snow series, but the protagonist of the first book died, but did he? The first book had two divergent endings, one of which was clearly delusional, but this second book initially has the reader (well, this reader) pondering the truth of that conclusion.

Eventually, I figured out, this book is the same world, but a different character set in that world, name change be damned, and then I was back into the tale.

We have Ulf, who is fleeing the Fisherman, after, quelle surprise, screwing the Fisherman in some small way. That the contract killer didn't and couldn't actually kill played a large part of that screwing and fleeing. The plot is your basic boy flees crime boss, boy visits small town, boy meets up with down-on-luck girl with issues and a kid, boy and girl like each other, crime boss' henchman shows up in small town, henchman is thwarted by small town's population, boy and girl live happily ever after plot, the same one that a dozen action movie plots use.

I enjoyed the book. It was a fast, mildly engaging read. it'll make more sense with the previous book read first. Worth reading if you're a Nesbø fan.

I sold hash and saved up for that bastard miracle cure I forced myself to believe in because the alternative was unbearable, because my fear that the little girl with the blue light in her eyes would die was even stronger than my own fear of death. Because we take comfort where we can find it: in a German medical journal, in a syringe full of heroin, in a shiny new book promising eternal life as long as you subordinate yourself to whatever new saviour they’ve just come up with.
Location: 1,173

“Thanks for taking care of Knut after the funeral.”

“Don’t mention it. How is he taking it?”

She shrugged her shoulders. “Women always find a way of coping.”
Location: 1,411

“I’ve changed my mind. I want to know what you’re running from.”

“Because I believe you’re a good person. And good people’s sins can always be forgiven.”

“What if you’re wrong, what if I’m not a good person? Does that mean I’d end up burning in that hell of yours?” It came out more bitterly than I intended.
Location: 1,413

“Why are you still calling me Ulf?”

“That’s what you told me your name was, so that’s the name I use. Until you want to be called something different. Everyone should be allowed to change their name every so often.”
Location: 1,462

“…bayama. And Futabayama salutes you, courageous Haguroyama.” He raised his head. He had sand stuck to his wet face.

“Futabayama’s apprentice. Haguroyama also went on to be a master.” “Did he? He beat Futabayama?”

“Oh, yes. Toyed with him. He just had to learn a few things first. Such as how to lose.” Knut sat up. He squinted at me.

“Does losing make you better, Ulf?”

I nodded slowly. I saw that Lea was paying attention too.

“You get better”—I squashed a midge that had landed on my arm—“at losing.”

“Better at losing? Is there any point in being good at that?”

“Life is mostly about trying things you can’t do,” I said. “You end up losing more often than you win. Even Futabayama kept on losing before he started to win. And it’s important to be good at something you’re going to do more often, isn’t it?”

“I suppose so.” He thought about it. “But what does being good at losing actually mean?”

I didn’t remember much of my wasted years at university, but I did remember William Blackstone, the eighteenth-century legal philosopher who occupied much the same territory as Mattis, at the crossroads of justice and faith in God. I remembered him because Grandfather had used him, Isaac Newton, Galileo Galilei and Søren Kierkegaard as examples of the fact that even the very sharpest minds are prepared to believe in the stuff and nonsense of Christianity if they think it offers a chance to escape death.
Location: 2,342