A Case of Exploding Mangoes« an older post
a newer one »The Girl With All the Gifts
Book Notes Written with a loving hand by kitt some time around 21:59 on 18 July 2015 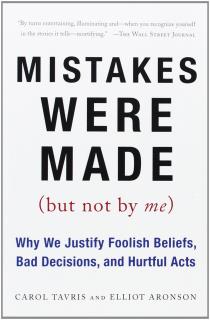 This book was recommended to me in Susan's Slack channel by Francis. It had been mentioned in a meeting as a good business book to read. I read the first chapter, maybe the introduction, online, and bought the book. It's about the theory of cognitive dissonance and how reality intrudes on our beliefs, causing us to do things we don't think we would do.

The book is an easy introduction to the theory and the consequences of what happens when we have two opposing beliefs, how we justify bad actions to ourselves, and how we do those bad actions in the first place (one small step at a time). It also describes just how many people don't follow scientific methods before making declarations, making assumptions, or moving forward. In particular, most people including those in the health professions, don't understand statistics and control groups.

Memory is another area where justifications are made. The book discusses false memories, as well as how people remember how bad things are. The depth of "bad" is dependent on your desire for the experience, and inversely proportionate. If you want to do something and it sucks, it sucks less than if you do something and didn't want to do it, even if the experience is the same. You know, that whole justification thing, which is why we were reading this book to begin with.

The fundamental issue in all of this justification, however, is the lack of space to make mistakes. Mistakes are associated with being stupid in American culture, which means kids are trained to fear making mistakes. This, in turn, incentivizes not trying.

It's a horrible way to live, by the way.

I recommend this book highly, along with the philosophy of "Try, try harder. Fail, fail harder. Try, try again."