Creative Quest« an older post
a newer one »Tomorrow and Tomorrow
Book Notes Instead of being asleep at 22:46 on 9 October 2018, kitt created this: 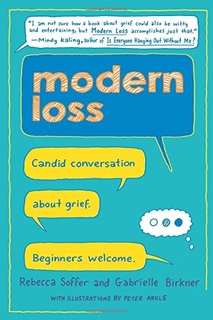 Things have been rough as of late.

A while ago, I recognized that what I'm going through is grief, and that I have not given myself a chance to grieve the large number of losses I have had this year. I need to grieve, I need to process a large amount of non-classical loss, and let it go. One doesn't process grief on demand, no matter how much our loved ones or society want us to do so. However, having those who have also grieved, who have also had losses, guide us through the darkness that is grief, hold our hands, and tell us, "this f---ing sucks, it f---ing hurts, and maybe it'll hurt less in the future, maybe it won't, but I need you to know that you aren't the only person experiencing this loss, you have my, your, our permission to grieve," helps in unexplainable ways.

Unfortunately, this is not the book about grief that I needed. It is A book about grief. It is a series of essays from people who have been through loss and grief and have in some measure passed through the pain, who are turning around to reach back and help those just starting the journey. It is a good book about grief, in that it talks a lot about grief as experienced in modern times, about things that aren't "classically" okay to grieve about.

But, again, not the one I needed.

The book originated from a website where people could express their grief and find support. The book is an extension of that website, many of the essays taken from the content of the website. Which is fine, it's a good book if you're a grief voyeur. I am not. I did not enjoy reading about other people's pain. I was/am looking for a book on processing my grief.

Anyone who is able to relate to more than a couple of the essays in this book has had a shit hand dealt to them, and that really sucks.

Introduction, by Rebecca Soffer and Gabrielle Birkner
Modern Loss has helped to demystify a process with a long arc. News flash: you live with grief 24/7, forever, and endure endless triggers along the way. But we wanted people to realize, along with the stark realities of having to go through life without someone important, that they aren’t broken, that life goes on, and that it can actually be quite terrific—even if it’s impossible to believe in the moment.
Page xviii

The Second Third Child, by Eric Meyer
We still mourn that decision. And that’s the worst part: you can make the right decision, the very best decision you know how to make for yourself and your family, and still have cause to mourn.
Page 25

Mother Figure, by Elizabeth Percer
Usually, when we reflect on how love doesn’t play by the rules, we are referring to its poor timing, or its unrequited victims, or its failure to sustain anything beyond the rush of infatuation.
Page 36

Introduction, by Gabrielle Birkner
Then there’s the passing of time, which hasn’t so much healed as it has taught me how better to coexist with my grief.
Page 46

Are You My Papi?, by Mathew Rodriguez
Sometimes, I think about the maxim “Daughters marry their fathers.” It speaks to the desire to find a man we trust, even if it’s a partner for the night. We want to feel his trust—we want for it to be sturdy and familiar, like a knit blanket or macaroni and cheese.
Page 94

Are You My Papi?, by Mathew Rodriguez
The yearning for human connection, whether two hours or a few sweet months, is the desire to be taught, to be shown new things, to hear new stories, to get a slightly widened worldview.
Page 96

What’s Good Enough Now, by LaNeah “Starshell” Menzies
But long before the moving trucks pulled away, leaving our two sets of dishes under the same roof, our relationship had been suffering thanks to an old worry of his: he felt I didn’t love him, or at least couldn’t express that love. Funny thing is, I loved him more than anything. Cheesy, I know, but it was the kind of romance that shows you the future, the sun, moon, and stars, when you look into someone’s eyes.
Page 97

What’s Good Enough Now, by LaNeah “Starshell” Menzies
If the whole point of getting into a relationship is to fall completely and madly and utterly in love to the point where you feel like you can’t live without someone, but you know that you can, are you able to love completely?
Page 100

Taboo Times Two, by Alice Radosh
Friends and family from around the country and Europe came to mourn together. The loss was enormous, and it was not mine alone. Night after night the house was crowded with people who hugged me and cried along with me, who packed my freezer with casseroles and offered to sleep over, should I want the company. Sympathy cards jammed the narrow box at my rural post office, and more than a hundred stories filled Bart’s memorial website—stories from colleagues at the college where Bart taught, from squash partners and friends at the local table tennis club, from total strangers he tended to as a volunteer EMT, from a heartbroken granddaughter. Loved ones called daily to check in, and my adult children urged me to come for an extended visit.
Page 103

The Promise, by Mattie J. Bekink
I blamed myself for Elouisa’s death. I succumbed to feelings of failure. My body, tasked only with seeing her safely into this world, had failed.
Page 112

Introduction, by Gabrielle Birkner
These fellow travelers understood that there exists a pain so profound that it becomes embedded in your psyche, your personality, maybe even your DNA.
Page 124

Dad-die Issues, by Yassir Lester
I had no idea how to make a Windsor knot on a necktie, so I watched a YouTube video. YouTube could single-handedly raise the fatherless children of this country, and it probably is already doing so.
Page 134

The Dead-Brother Code Switch, by Rachel Sklar
as you grow up into an adult, no one knows your baggage unless you share it.
Page 141

The Dead-Brother Code Switch, by Rachel Sklar
If you weren’t the one who died, then you eventually have to figure out how to keep living. And part of that is figuring out what kind of access you want others to have.
Page 141

Introduction, by Rebecca Soffer
This was my first encounter with the many knots that form with all the stuff, trivial and critical, sentimental and surprising, valuable and not, that loved ones leave behind. My mom’s closet, a place where I once made gleeful discoveries of things like her ivory-leather jewelry case and red disco-era stilettos, became a place where everything was for the taking, and yet none of it seemed okay to have without her.
Page 159

The Accidental Archivist, by Spencer Merolla
as I went through the rituals of laying them to rest, well-meaning people assured me that I would “always have the memories.” But almost immediately those memories started to fade. First their voices, then their smells, the punch line to one of my dad’s stupid jokes; and after that weird period where I thought I saw them everywhere, I found that the images in my mind of their faces had lost their crispness.
Page 175

The Accidental Archivist, by Spencer Merolla
In grief we forget, and it’s terrible.
Page 175

The Accidental Archivist, by Spencer Merolla
Surely my parents would not have wanted me to feel bogged down by their possessions, but neither would they have wanted me to forfeit the comforts to be had in keeping them around.
Page 175

The Accidental Archivist, by Spencer Merolla
In the last few weeks of her life, when everything she told me took on an outsize importance in my mind, my mom explained that it was important to preserve bad memories along with the good ones.
Page 178

Introduction, by Rebecca Soffer
But I do know that no “like” can replace a conversation, or a hug, or shared double martinis.
Page 198

My Husband’s Death Went Viral, and All I Got Was This Lousy T-shirt, by Nora McInerny
Everyone will lose somebody they love. And I don’t say that as a threat, I say it as a fact. Your parents are going to die. Your lover is going to die. The children you don’t even have yet, someday they will die.
Page 204

SECRETS: What They Didn’t Tell Us, and What We Aren’t Telling Others, Introduction, by Gabrielle Birkner
Even in war, where stray bullets and car bombs kill indiscriminately, people look for patterns that don’t exist to justify why some were snuffed out and others were not.
Page 228

Introduction, by Gabrielle Birkner
But this attempt at rationalization doesn’t make the loss less sad; it just makes everyone else feel less vulnerable. At least until their made-up rules are broken.
Page 229

Introduction, by Gabrielle Birkner
There are the secrets about the deceased that the grief-stricken keep from others out of respect or shame or fear of blame or because there remains a taboo of speaking ill of the dead. In our posthumous retelling, we strike their questionable politics or destructive addictions or debilitating phobias or that the cause of death was a self-inflicted gunshot wound.
Page 229

My Dead Husband, the Serial Adulterer, by Robyn Woodman
Just because someone is dead, that doesn’t mean they didn’t suck. It just means you’re not supposed to talk about it.
Page 234

My Dead Husband, the Serial Adulterer, by Robyn Woodman
Just because someone sucked, that doesn’t mean they can’t be remembered fondly . . . eventually.
Page 235

Practice Imperfect, by Rachel M. Ward
But let’s focus on how you’re a nice person and you’re crediting my better angels. Which is why I am sorry to report: my angels are dicks. Trust me. I hang with them all the time, and they’re always doing the right thing for the wrong reason.
Page 237

Practice Imperfect, by Rachel M. Ward
Why do these losses always seem like secrets? Why are they always confessions?
Page 239

From a Purple Room to the Obama White House, by Marisa Renee Lee
know what real fear feels like. Fear that keeps you up at night, knowing morning will bring you one day closer to being without the person you love. Fear of the day death knocks on the door, and knowing it’s your job to help usher Mom between two worlds.
Page 285

ABSENCE + TIME: What Comes Later, Introduction, by Gabrielle Birkner
It was an affirmation that our losses hadn’t kept us from finding happiness, even as we wished that our loved ones were there to see it and share it. It was an admission that yes, the first year is the hardest, except for, in their own way, all the others.
Page 306

David, by Elisa Albert
For a long time, I saw that there were two kinds of people: those who had come into contact with death and those who had been spared contact with death. Obviously it was only a matter of time until the latter joined the former, but in the meantime how clueless and shallow and silly the spared-contact-with-death seemed!
Page 310

David, by Elisa Albert
Amy Hempel’s story “In the Cemetery Where Al Jolson Is Buried.”
Page 310

David, by Elisa Albert
You were an astrophysicist, Dave. You know that energy cannot be destroyed, only changed, transformed.
Page 311

Considering the Alternative, by Artis Henderson
but anticipating a thing and actually experiencing it are very different.
Page 315