How To Do Nothing« an older post
a newer one »Democracy in Chains
Book Notes kitt decided around 18:22 on 9 November 2019 to publish this: 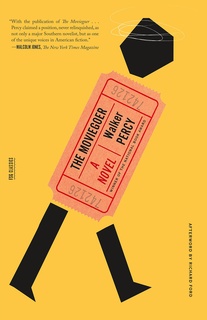 Okay, this book wasn't really recommended per se, at least not for its contents. It was referenced in a Daily Stoic newsletter for its providence in ending up as the 1962 National Book Award winner, even though the publisher's president didn't like the book, and didn't promote the book, etc. The book was handed, very late in the process, to one of the award judges, who read it and nudged enough of the other readers to read it, and oh, hey, look it won. None of the process of winning the award, after writing and submitting whatever revisions Percy needed to do, was in Percy's control. Hence, the story's story in the newsletter.

I'm rather with the publishing house's president on this one, I'm very meh about it, winner or not. There are some books of earlier eras that stand up to the test of time. This is not one of them. Lots of negro this, and sexism that, and oh, I don't know what the hell I'm doing so I'll drift through life and use movie locations to define my existence.

Ahead of myself there.

Here we have Binx Bolling, a stockbroker in the early sixties. He hires women to work for him so that he can date them. He comes from a family well off enough that he doesn't seem to need to work. He has a lost cousin whose mental health is questionable after her fiancé died in a car crash days before their wedding. His aunt, the cousin's step mother, looks out for the cousin, thinks our protagonist is a charming young man (at 30) who just hasn't found his way in life.

Let me help: "Dear Auntie, Found my way, I'm going to be a slacker the rest of my life. Please send money. Love, Binx."

The main character lets others define his world (you aren't anywhere until a movie has been filmed in your neighborhood), and goes through life detached while observing, not a participant in life.

Meh, not a fan. Unless you need to read the book for class, don't.

Telephone conversation could take place at all hours of the night, conversations made up mostly of long silences during which I would rack my brain for something to say while on the other end you could hear little else but breathing and sighs. When these long telephone silences come, it is a sure sign that love is over. No, they were not conquests. For in the end my Lindas and I were so sick of each other that we were delighted to say good-bye.
Page: 26

Who wants to be dead last among one hundred and eighty million Americans? For, as everyone knows the polls report that 98% of Americans believe in God and the remaining 2% are atheists and agnostics - which leaves not a single percentage point for a seeker.
Page: 41

He has thick lips, cropped reddish hair and skin to match. She is mousy. They are not really happy. He is afraid their honeymoon is too conventional, that they are just another honeymoon couple. No doubt he figured it would be fun to drive down the Shenandoah Valley to New Orleans and escape the honeymooners at Niagara Falls and Saratoga. Now fifteen hundred miles from home they find themselves surrounded by couples from Memphis and Chicago. He is anxious; he is threatened from every side. Each stranger he passes is a reproach to him, every doorway a threat. What is wrong? he wonders. She is unhappy but for a different reason, because he is unhappy and she knows it but doesn't know why.
Page: 46

"A man must live by his lights and do what little he can and do it as best he can. In this world goodness is destined to be defeated. But a man must go down fighting. That is the victory. To do anything less is to be less than a man."
Page: 163

Kate gives me a look -- it is understood that we do not speak during the movie.
Page: 188

Although she has been working for me two weeks, I have not asked her for a date nor spoken of anything other than business. Yet the fact is
that for weeks I have thought of little else.
Page: 191

Wow, this is so completely rage-inducing. Hiring someone so that you can date her? Right, early sixties, women just coming into the workforce, sure. Whatever. Hate. It.

I seem to recall an article about a subway breaking down in New York. The passengers who had their noses buried in newspapers began to talk to each other.
Page: 230

I was laughing at this. Noses in newspapers. We are even less social in common spaces now.

He made a mistake. He was trying to sleep. He thought he had to sleep a certain number of hours every night...
Page: 256

Not in a thousand years could I explain it to Uncle Jules, but it is no small thing for me to make a trip, travel hundreds of miles across the country by night to a strange place and come out where there is a different smell in the air and people have a different way of sticking themselves into the world. It is a small thing to him but not to me. It is nothing to him to close his eyes in New Orleans and wake up in San Francisco and think the same thoughts on Telegraph Hill that he thought on Carondelet Street. Me, it is my fortune and misfortune to know how the spirit-presence of a strange place can enrich man or rob a man but never leave him alone, how, if a man travels lightly to a hundred strange cities and cares nothing ing for the risk he takes, he may find himself No one and Nowhere.
Page: 294

Whenever I feel bad, I go to the library and read controversial periodicals. Though I do not know whether I am a liberal or a conservative, I am nevertheless enlivened by the hatred which one bears the other In fact, this hatred strikes me as one of the few signs of life remaining in the world. This is another thing about the world which is upside down: all the friendly and likable people seem dead to me; only the haters seem alive.
Page: 299

"Do you think it is possible for a person to make a single mistake -- not do something wrong, you understand, but make a miscalculation - and ruin his life?"

"I mean after all. Couldn't a person be miserable because he got one thing wrong and never learned otherwise - because the thing he got wrong was of such a nature that he could not be told because the telling iteslf got it wrong - just as if you had landed on Mars and therefore had no way of knowing that a Martian is mortally offended by a question and so every time you asked what was wrong, it ony grew worse for you?"
Page: 337

You say it is a simple thing surely, all gain and no loss, to pick up a good-looking woman and head for the beach on the first fine day of the year. So say the newspaper poets. Well it is not such simple thing and if you have ever done it, you know it isn't -- unless, of course, the woman happens to be your wife or some other everyday creature so familiar to you that she is as invisible as yourself. Where there is chance of gain, there is also chance of loss. Whenever one courts great happiness, one also risks malaise.
Page: 357

We swim and lie down together. The remarkable discovery forces itself upon me that I do not love her so wildly as I loved her last night.
Page: 399

But, good as it is, my old place is used up (places get used up by rotatory and repetitive use) and when I awake, I awake in the grip of everydayness. Everydayness is the enemy. No search is possible. Perhaps there was a time when everydayness was not too strong and one could break its grip by brute strength. Now nothing breaks it - but disaster
Page: 427

"Losing hope is not so bad. There's something worse: losing hope and hiding it from yourself."
Page: 569

Money is a good counterpoise to beauty. Beauty, the quest of beauty alone, is a whoredom.
Page: 577