When Breath Becomes Air« an older post
a newer one »Deep Freeze
Book Notes Yeah, kitt finished writing this at 16:46 on 11 June 2018 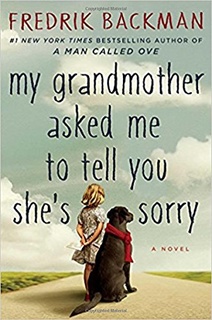 This is the third (and a half) book I've read by Fredrik Backman. With such a long title, I can't say I would have chosen to read it, even with liking Backman, but no, I'm kidding there, I would have read it if I had known about it. Fortunately, my family knew about it and let me know about it, and it's adorable.

Imagine having a cranky old grandmother who is just awful and awesome at the same time. Now imagine being seven, almost eight, and having a mind of your own and the enviornment where you can speak it. Okay, okay, you're considered weird, and are in trouble a lot, and the school kids pick on your ALL THE F'ING TIME, but Granny!

Anyway, smart kid, dying grandmother, a mystery to solve, and a life to unfold. As kids, we don't realize that the adults around us have a history before us. Backman writes that clouded view and gives us a child's view of navigating grief and anger and life.

I enjoyed this book. The storytelling slowed me down a few times, I had to reread parts, and skipped over small parts when I was tired and figured the details would come back later when I needed them. It's a cute story, worth reading.

She shouldn’t take any notice of what those muppets think, says Granny. Because all the best people are different—look at superheroes. After all, if superpowers were normal, everyone would have them.
Page 1

“Stop fussing. You sound like your mother. Do you have a lighter?”

“How long are you going to use that as an excuse?”

“Until I’m not seven anymore?”
Page 5

Granny has had nine different nurses since she was admitted. Seven of these she refused to cooperate with, and two refused to cooperate with her, one of them because Granny said he had a “nice ass.” Granny insists it was a compliment to his ass, not to him, and he shouldn’t make such a fuss about it. Then Mum told Elsa to put on her headphones, but Elsa still heard their argument about the difference between “sexual harassment” and “basic appreciation of a perfectly splendid ass.”
Page 16

She sits reading Harry Potter and the Order of the Phoenix on the iPad for about the twelfth time. It’s the Harry Potter book she likes the least; that’s why she’s read it so few times.
Page 22

It’s very difficult not to love someone who can hear you say something as horrible as that and still be on your side.
Page 25

Having a grandmother is like having an army. This is a grandchild’s ultimate privilege: knowing that someone is on your side, always, whatever the details. Even when you are wrong. Especially then, in fact.
Page 45

Granny says people who think slowly always accuse quick thinkers of concentration problems. “Idiots can’t understand that non-idiots are done with a thought and already moving on to the next before they themselves have. That’s why idiots are always so scared and aggressive. Because nothing scares idiots more than a smart girl.”
Page 47

Words I wish my granny had told me, though now that I think about it, I suspect Scott tried.

They sit there in the sort of silent eternity that only mothers and daughters can build up between themselves.
Page 66

People who have never been hunted always seem to think there’s a reason for it. “They wouldn’t do it without a cause, would they? You must have done something to provoke them.” As if that’s how oppression works.
Page 80

Like all hunters, shadows have one really significant weakness: they focus all their attention on the one they’re pursuing, rather than seeing their entire surroundings. The one being chased, on the other hand, devotes every scrap of attention to finding an escape route.
Page 83

“Sometimes the safest place is when you flee to what seems the most dangerous,” said Granny, and then she described how the prince rode right into the darkest forest and the shadows stopped, hissing, at the edge. For not even they were sure what might be lurking inside, on the other side of the trees, and nothing scares anyone more than the unknown, which can only be known by reliance on the imagination. “When it comes to terror, reality’s got nothing on the power of the imagination,” Granny said.
Page 84

All fairy stories take their life from the fact of being different. “Only different people change the world,” Granny used to say. “No one normal has ever changed a crapping thing.”
Page 89

Only then does Elsa realize that it actually couldn’t have had a chance to relieve itself for several days, unless it did so inside its flat. Which she rules out because she can’t see how it could have maneuvered itself into using a toilet, and it certainly wouldn’t have crapped on the floor, because this is not the sort of thing a wurse would demean itself by doing. So she assumes that one of the wurse’s superpowers is clenching.
Page 107

Because not all monsters were monsters in the beginning. Some are monsters born of sorrow.
Page 126

“Because when you love someone very much, it’s difficult to learn to share her with someone else.”
Page 135

“I think your grandmother functioned so well in chaotic places because she was herself chaotic. She was always amazing in the midst of a catastrophe. It was just all this, everyday life and normality, that she didn’t quite know how to handle."
Page 145

The walls of the office are covered in bookshelves. Elsa has never seen so many books outside a library. She wonders if the woman in the black skirt has ever heard of an iPad.
Page 170

It’s strange how quickly the significance of a certain smell can change, depending on what path it decides to take through the brain. It’s strange how close love and fear live to each other.
Page 195

“It’s hard to help those who don’t want to help themselves.”

“Someone who wants to help himself is possibly not the one who most needs help from others,” Elsa objects.
Page 213

But she doesn’t want to disappoint him, so she stays quiet. Because you hardly ever disappoint anybody if you just stay quiet.
Page 217

Death was Granny’s nemesis. That’s why she never wanted to talk about it. And that was also why she became a surgeon, to cause death as much trouble as she could.
Page 220

People in the real world always say, when something terrible happens, that the sadness and loss and aching pain of the heart will “lessen as time passes,” but it isn’t true. Sorrow and loss are constant, but if we all had to go through our whole lives carrying them the whole time, we wouldn’t be able to stand it. The sadness would paralyze us. So in the end we just pack it into bags and find somewhere to leave it.
Page 220

“Don’t fight with monsters, for you can become one. If you look into the abyss for long enough, the abyss looks into you.”
Page 243

“Most likely they told her a whole lot of damned things she wasn’t allowed to do, for a range of different reasons. But she damned well did them all the same. A few years after she was born they were still telling girls they couldn’t vote in the bleeding elections, but now the girls do it all the same. That’s damned well how you stand up to bastards who tell you what you can and can’t do. You bloody do those things all the bloody same.”
Page 280

“Why are you so horrible to each other if you’re brothers?”

“You don’t get to choose your siblings,” mutters Alf.
Page 285

Bowled over by this, Elsa looks at him and waits, because she knows that only by waiting will she get him to tell the whole story. You know things like that when you’re almost eight. She waits for as long as she needs to.
Page 308

It’s snowing again, and Elsa decides that even if people she likes have been shits on earlier occasions, she has to learn to carry on liking them. You’d quickly run out of people if you had to disqualify all those who at some point have been shits.
Page 315

Now and then Elsa would ask Granny why grown-ups were always doing such idiotic things to each other. Granny usually answered that it was because grown-ups are generally people, and people are generally shits.

Tell him that sometimes things have to clear a space so something else can take its place.
Page 340

A funeral can go on for weeks, because few events in life are a better opportunity to tell stories. Admittedly on the first day it’s mainly stories about sorrow and loss, but gradually as the days and nights pass, they transform into the sorts of stories that you can’t tell without bursting out laughing.
Page 353

“So why are you together, then?”

“Because we accept each other as we are, perhaps.”

“And you and Mum tried to change each other?”
Page 357

Love the book review, the

Love the book review, the snippets are wonderful and I enjoyed the book all over again. And your comments had me nodding my head in agreement.