The Man With The Golden Torc« an older post
a newer one »The Wise Man's Fear
Book Notes Instead of being asleep at 22:19 on 13 December 2016, kitt created this: 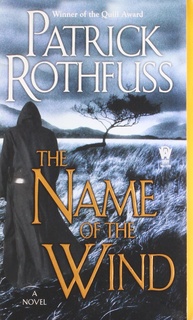 I have had this book on my shelf for a long time. I knew this was the first book of the series and that the series wasn't completely written and that the fans of the author are as frustrated with the author's not completing the series as much as George R.R. Martin's fans are at not finishing the Song of Ice and Fire already. So, I hadn't started the series, of which there are two books currently published.

Well, earlier this month, for reasons I don't quite recall, I picked up the book and started reading.

And immediately kicked myself for not having started reading the book when it was published, almost ten f'ing years ago.

The story is told in two timelines: present with Kote the innkeeper, and Kvothe, a young kid of eight as he grows up and into Kote. The first part of the book, described to me as "the slow start of the book, just get through it to the good stuff," was interesting. And I like how the present and past interweave. I like Rothfuss' story telling, and I like the world he has created.

Along with the next book, The Wise Man's Fear, which I started reading about 5 minutes after I finished this one. That one is going to mean I've read only 73 books this year, since it'll likely take me until the end of the year to finish it. And then I'll be among the many, many fans wondering when book three will be out.