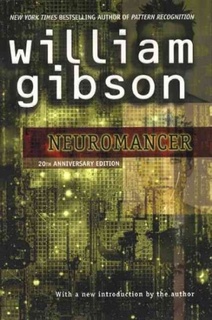 Yet, when I started reading this book, I was puzzled that it didn't seem familiar.

How could I not have read this book? I am no longer sure I had, to be honest. Case is a hustler, stole from his employer, was blacklisted. He's hired by Armitage and Molly, and takes on a project where they break into some high security place (digital and physical) to steal something. The book is about that mission.

Reading Neuromancer now, 30+ years after its initial publication is an odd experience, given that many of the terms and concepts Gibson describes are just common place. While avant-garde when published, so much has been become modern technologies, maybe inspired by the book? Unsure, but likely.

‘How you doing , Dixie?’
‘I’m dead, Case. Got enough time in on this Hosaka to figure that one.’
‘How’s it feel?’
‘It doesn’t.’
‘Bother you?’
‘What bothers me is, nothin’ does.’
‘How’s that?’
‘Had me this buddy in the Russian camp, Siberia, his thumb was frostbit. Medics came by and they cut it off. Month later he’s tossin’ all night. Elroy, I said, what’s eatin’ you? Goddam thumb’s itchin’, he says. So I told him, scratch it. McCoy, he says, it’s the other goddam thumb.’ When the construct laughed, it came through as something else, not laughter, but a stab of cold down Case’s spine. ‘Do me a favor, boy.’
‘What’s that, Dix?’
‘This scam of yours, when it’s over, you erase this goddam thing.’
Chapter 8 somewhere

"I try to plan, in your sense of the word, but that isn't my basic mode, really. I improvise. It's my greatest talent. I prefer situations to plans, you see..."
Page 118

The Finn grinned. “It doesn’t much matter. You gotta hate somebody before this is over.” He turned and headed for the back of the shop.
Page 166

“And the Yak, they can afford to move so fucking slow, man, they'll wait years and years. Give you a whole life, just so you'll have more to lose when they come and take it away. Patient like a spider. Zen spiders.

"I didn't know that then. Or if I did, I figured it didn't apply to us. Like when you're young, you figure you're unique. I was young."
Page something

"How do you cry, Molly? I see your eyes are walled away. I'm curious." His eyes were red-rimmed, his forehead gleaming with sweat. He was very pale. Sick, Case decided. Or drugs.
"I don't cry, much."
"But how would you cry if someone made you cry?"
"I spit," she said. "The ducts are routed back into my mouth."
"They you've already learned an important lesson, for one so young... That is the way to handle tears."
Page 177