Blue Moon« an older post
a newer one »How to be an Antiracist
Book Notes Written with a loving hand by kitt some time around 21:22 on 25 December 2019 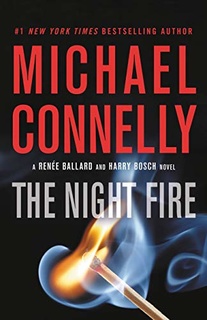 This is book three of the Renée Ballard/Harry Bosch crossover, continuing the world of Bosch's Los Angeles.

Okay, at the funeral of Bosch's mentor, he is handed a murder book by the mentor's widow. Bosch is confused why, after illegally removing the unsolved murder murder book, his mentor didn't actually do anything with the case. Puzzling indeed, until plot twist at the end, when we realize the mentor didn't want anyone to investigate the murder. So there we go.

Given the events at the end of the previous Bosch/Ballard book, Bosch isn't a cop any more. The need for justice is strong in this one, however, so he keeps at the investigations as an investigator for his half brother (yeaaaaaaah, I'm not a big fan of the Lincoln Lawyer, Mickey Haller, and tend to avoid those books as a general rule). A simple confession isn't, and, hey, what do you know solving the one murder with the bogus confession leads to solving the "accidental" death that Ballard was investigating. Talk about a win-win!

I like Bosch books. He is, however, a 69 year old retired cop without a badge. There are only so many more books in the old guy. Ballard may be the way of the future, but I'm reading for the Bosch references.

If you're a Bosch completionist or fan, keep reading. If not, eh, they are reasonably good to read.

Domestic disputes were tricky. Calming anger, settling nerves, and then simply backing away might seem to be the most judicious path, but if an hour or a week or a year later the same relationship ends in a killing, the neighbors talk to the news cameras and say the police came out before and did nothing. Better safe now than sorry later. That was the rule and that was why the patrol officers wanted no part of the decision.
Page 170

"We’re not calling ICE. If you have a problem with that, Shuman, you can get back in your car and go back out on patrol. I’ll handle it from here.”

Shuman averted his eyes and shook his head.

“We call ICE, they get sent back and then they do it again,” Ballard said. “They go through all the rape and horrors they went through getting here the first time.”

“That’s not our concern,” Shuman said.