The Highwayman« an older post
a newer one »Wayward
Book Notes Yeah, kitt finished writing this at 21:58 on 16 June 2017 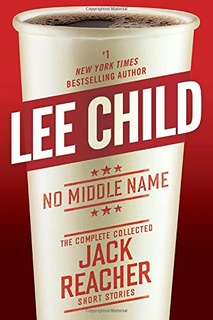 Yeah, I'm finally in a place where I don't have Internet. This is both fantastic and, well, fantastic. I'm on my way to both reading five books this week, and being completely and totally okay without my computer. An interesting happy place to be.

And that's all totally unrelated to this book in particular, other than I read this book today. Well, much of this book today. It's a book of Reacher short stories. To me, that means I've likely read it before, being the Reacher fan that I am.

Fortunately for me, there were a number of the short stories I hadn't read. Can't say that any more!

Zipped through this book. Enjoyed it. A number of the stories Reacher solved a problem and went away. He didn't linger. He didn't get the girl. And those are all okay.

I enjoyed the short stories. Again, if a Reacher fan, yep, worth reading.

Surprise was always good. Delay was always fatal. Guys who let a situation unfold in its own good time were just stockpiling problems for themselves.
Location: 2235

He heard the sound of steel on linoleum as the Colt skittered away, and he brushed the chair aside and groped and patted blindly until he found the collar of Croselli’s shirt, which he bunched in his left hand while he pounded away with his right, short roundhouse punches to the side of Croselli’s head, his ear, his jaw, one, two, three, four, vicious clubbing blows, until he felt the steam go out of the guy, whereupon he reached forward and grabbed the guy’s wrists and yanked them up behind his back, high and painful, and he clamped them together in his left hand, human handcuffs, a party trick perfected years before, enabled by the freakish strength in his fingers, from which no one had ever escaped, not even his brother, who was of equal size, or his father, who was smaller but stronger.
Location: 2502

Okay, who wrote this sentence? This is one sentence. One. I have to wonder if Child challenged himself to see what the longest sentence he could write and get past his editor would be.

The waitress shrugged and made a shape with her mouth, and said business was OK, but she didn’t sound convinced. And waitresses knew. They had a close-up view. Better than accountants or auditors or analysts. They saw the sad expression on the owner’s face, exactly once a week, on payday.
Location: 4663