Dead Beat« an older post
a newer one »Three Body Problem
Book Notes Instead of being asleep at 17:58 on 26 May 2017, kitt created this: 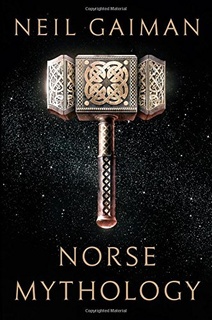 I can't say that I'm a big Neil Gaiman fan. I know, I know, I've read a number of his books, but the more of his books I read, the less I'm interested in reading his books. I'm not sure why this is, but I'll speculate that a large part of my lack of enthusiasm is due to the small amplitude of the plots in his books. In particular, I find most of his stories that I've read plod along. The climax of the of the stories are often "Oh, okay" instead of "OH MY GOD WOW," or something close to that. There isn't a thrilling zing or fast heartbeats or shallow breathing, just a thing that happened that of course it would happen, because, really, that's what should happen and okay.

Which is why I can say I have this book because Mom picked it out. Yes, I'm back to a book from that pile of books, because Internet (no, not really, but maybe a bit).

Anyway, I have this book. I read it. It was, uh, well, cute. Gaiman was fascinated by the Norse gods as a kid, and retells their tales in this book as a series of short stories.

From which we conclude, the Norse gods were asshats.

There were a number of amusing stories, and a number of "What. The. F---?" stories. Pretty much all were entertaining. A number included lessons one could take to learn what NOT to do. I enjoyed the book, and would likely recommend this book as someone's first Gaiman book to read. Just don't listen to the audiobook.