Strange Dogs« an older post
a newer one »Parable of the Talents
Book Notes Yeah, kitt finished writing this at 03:06 on 30 August 2017 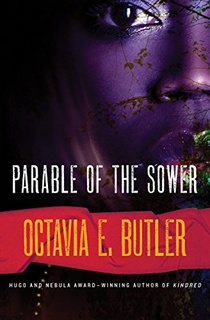 The first part of the book, the set up for the disaster and the plot that follows, reminded me of just how unprepared I am for a disaster (human-made or otherwise). The world we live in is more fragile than we think.

It is also more resilient than we realize. Even as things go bad, and the world becomes more and more authoritarian, Butler doesn't see it as falling apart. There is some level of civilization and technology, unlike, say, A Canticle for Leibowitz.

Other aspects I found interesting was the assumption of commonplace violence. These days, we are still horrified by casual violence. In this book, few people are, it is so integrated into the world.

I wrote a couple more notes when I was reading the book. The corporate take-over of communities, and the disparate levels of protection (if you pay, the police will actually investigate, otherwise, you're out of luck) really aren't that difficult to see from our current society.

The part that struck home, however, is the understand that water is a scarce resource. That. Yeah.

This book is way worth reading, not only because of discomfort revealed in the dystopia that Butler describes, but for the warning that comes with that world. One almost wishes the religion Butler describes could exist.

EARTHSEED: THE BOOKS OF THE LIVING
Page 2

Three smart sons and one dumb one, and it’s the dumb one she loves best.
Page 9

I get a lot of grief that doesn’t belong to me, and that isn’t real. But it hurts.
Page 12

Keith says God is just the adults’ way of trying to scare you into doing what they want.
Page 14

In the book of Job, God says he made everything and he knows everything so no one has any right to question what he does with any of it. Okay. That works. That Old Testament God doesn’t violate the way things are now. But that God sounds a lot like Zeus—a super-powerful man, playing with his toys the way my youngest brothers play with toy soldiers. Bang, bang! Seven toys fall dead. If they’re yours, you make the rules. Who cares what the toys think. Wipe out a toy’s family, then give it a brand new family. Toy children, like Job’s children, are interchangeable.
Page 16

To me, dead bodies are disgusting. They stink, and if they’re old enough, there are maggots. But what the hell? They’re dead. They aren’t suffering, and if you didn’t like them when they were alive, why get so upset about their being dead?
Page 23

God can’t be resisted or stopped, but can be shaped and focused. This means God is not to be prayed to. Prayers only help the person doing the praying, and then, only if they strengthen and focus that persons resolve. If they’re used that way, they can help us in our only real relationship with God. They help us to shape God and to accept and work with the shapes that God imposes on us. God is power, and in the end, God prevails.
Page 25

Every one knows that change is inevitable. From the second law of thermodynamics to Darwinian evolution, from Buddhism’s insistence that nothing is permanent and all suffering results from our delusions of permanence to the third chapter of Ecclesiastes (“ To everything there is a season”), change is part of life, of existence, of the common wisdom.
Page 26

Of course, no one called the fire department. No one would take on fire service fees just to save an unoccupied garage.
Page 32

At first there were a few neighbors who didn’t like that—older ones who said it was the job of the police to protect them, younger ones who worried that their little children would find their guns, and religious ones who didn’t think a minister of the gospel should need guns. This was several years ago.
Page 39

But my room is still mine. It’s the one place in the world where I can go and not be followed by anyone I don’t invite in.
Page 51

felt on the verge of talking to her about things I hadn’t talked about before. I’d written about them. Sometimes I write to keep from going crazy. There’s a world of things I don’t feel free to talk to anyone about.
Page 52

But even superficial comfort is better than none, I guess. I tried another tactic.
Page 56

“Maybe it’s time to look down. Time to look for some hand and foot holds before we just get pushed in.”
Page 66

I still feel inclined to trust her. But I can’t. I don’t. She has no idea how much she could have hurt me if I had given her just a few more words to use against me. I don’t think I’ll ever trust her again,
Page 68

The thing is, even with my writing problems, every time I understand a little more, I wonder why it’s taken me so long—why there was ever a time when I didn’t understand a thing so obvious and real and true.
Page 78

There’s always a lot to do before you get to go to heaven.
Page 85

Waiting is terrible. Waiting to be older is worse than other kinds of waiting because there’s nothing you can do to make it happen faster.
Page 89

My brother isn’t very smart, but he makes up for it in pure stubbornness. My father is smart and stubborn. Keith didn’t have a chance, but he made Dad work for his victory.
Page 93

I don't know what she's talking about. *whistles*

CIVILIZATION IS TO GROUPS what intelligence is to individuals. It is a means of combining the intelligence of many to achieve ongoing group adaptation. Civilization, like intelligence, may serve well, serve adequately, or fail to serve its adaptive function. When civilization fails to serve, it must disintegrate unless it is acted upon by unifying internal or external forces.
Page 102

And they knew the cops liked to solve cases by “discovering” evidence against whomever they decided must be guilty. Best to give them nothing. They never helped when people called for help. They came later, and more often than not, made a bad situation worse.
Page 114

But if everyone could feel everyone else’s pain, who would torture? Who would cause anyone unnecessary pain?
Page 115

A biological conscience is better than no conscience at all.
Page 115

"You think it’s going to get sane? It’s never been sane. You just have to go ahead and live, no matter what.”
Page 142

People are setting fires to get rid of whomever they dislike from personal enemies to anyone who looks or sounds foreign or racially different. People are setting fires because they’re frustrated, angry, hopeless. They have no power to improve their lives, but they have the power to make others even more miserable. And the only way to prove to yourself that you have power is to use it.
Page 143

But people who have no homes will build fires. Even people like us who know what fire can do will build them. They give comfort, hot food, and a false sense of security.
Page 180

I showed him four verses in all—gentle, brief verses that might take hold of him without his realizing it and live in his memory without his intending that they should. Bits of the Bible had done that to me, staying with me even after I stopped believing.
Page 199

Worship is no good without action. With action, it’s only useful if it steadies you, focuses your efforts, eases your mind.”
Page 219

“That isn’t what God is for, but there are times when that’s what prayer is for. And there are times when that’s what these verses are for. God is Change, and in the end, God prevails. But there’s hope in understanding the nature of God—not punishing or jealous, but infinitely malleable. There’s comfort in realizing that everyone and everything yields to God. There’s power in knowing that God can be focused, diverted, shaped by anyone at all. But there’s no power in having strength and brains, and yet waiting for God to fix things for you or take revenge for you. You know that. You knew it when you took your family and got the hell out of your boss’s house. God will shape us all every day of our lives. Best to understand that and return the effort: Shape God.”
Page 220

I would love to teach Dominic Earthseed as he grows up. I would teach him and he would teach me. The questions little children ask drive you insane because they never stop. But they also make you think.
Page 221

The nice thing about sitting and working alongside someone you don’t know very well, someone you’d like to know much better, is that you can talk with him or be quiet with him. You can get comfortable with him and with the awareness that you’ll soon be making love to him.
Page 260

"Her religion was important to her, so I went along. I saw how it comforted her, and I wanted to believe, but I never could.”
Page 261

“Stumbling across the truth isn’t the same as making things up.”
Page 261

“It sounds like some combination of Buddhism, existentialism, Sufism, and I don’t know what else,” he said. “Buddhism doesn’t make a god of the concept of change, but the impermanence of everything is a basic Buddhist principle.”
Page 261

“Human beings are good at creating hells for themselves even out of richness.”
Page 261

“I mean it’s too … straightforward. If you get people to accept it, they’ll make it more complicated, more open to interpretation, more mystical, and more comforting.”
Page 262

Strange how normal it’s become for us to lie on the ground and listen while nearby, people try to kill each other.
Page 269

“I’ll tell you, though, if we can convince ex-slaves that they can have freedom with us, no one will fight harder to keep it. We need better guns, though."
Page 292