Parable of the Sower« an older post
a newer one »The Summer Tree
Book Notes Yeah, kitt finished writing this at 21:58 on 2 September 2017 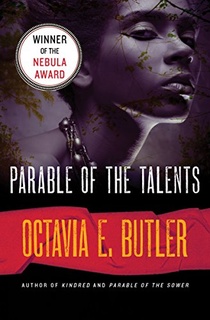 After Parable of the Sower, I don't know, I think I was expecting some sort of feel-good book as a follow up.

Instead, this is a dystopian nightmare that, well, let's be frank here, is completely and totally plausible given the state of the U.S. federal government these days. I do not know how we will last four years with the liar and incompetent existing in the executive office.

As difficult as I found the last book to read, this one was more difficult and more worth reading because of the discomfort.

All things change, but all things need not change in all ways.
Page 46

Earthseed is Olamina’s contribution to what she feels should be a species-wide effort to evade, or at least to lengthen the specialize-grow-die evolutionary cycle that humanity faces, that every species faces.
Page 46

A woman who expresses her opinions, “nags,” disobeys her husband, or otherwise “tramples her womanhood” and “acts like a man,” might have her head shaved, her forehead branded, her tongue cut out, or, worst case, she might be stoned to death or burned.
Page 50

She and Harry may be the most loyal, least religious people in the community, but there are times when people need religion more than they need anything else — even people like Zahra and Harry.
Page 60

Edwards said, “The God that holds you over the pit of hell, much as one holds a spider, or some loathsome insect over the fire, abhors you, and is dreadfully provoked; his wrath towards you burns like fire; he looks upon you as worthy of nothing else, but to be cast into the fire.” You’re worthless. God hates you. All you deserve is pain and death.
Page 63

That's something from Jonathan Edwards' 1741 sermon, “Sinners in the Hands of an Angry God.” To which I point out, again, the purpose of organized religion isn't to save, it is to create and maintain power over other people. This hell that he speaks of is a creation of man.

We say “God is Change,” but the truth is, we fear change as much as anyone does. We talk about changes at Gathering to ease our fears, to desensitize ourselves and to consider consequences.
Page 68

That might be the kindest gesture they could manage — to turn their backs and not join the mob. Others, whether we thought of them as friends or not, would be all too willing to join the mob and to stomp us and rob us if stomping and robbing became a test of courage or a test of loyalty to country, religion, or race.
Page 69

“People will think whatever they like,” I said. “It’s our job to show by our behavior that we’re not thieves, and we’re not fools. We’ve got a good reputation so far. People know we don’t steal. They know better than to steal from us."
Page 69

Bankole isn’t the only one of us who doesn’t see the possibility of doing anything he hasn’t seen done by others. And… although Bankole would never say this, I suspect that somewhere inside himself, he believes that large, important things are done only by powerful people in high positions far away from here. Therefore, what we do is, by definition, small and unimportant.
Page 71

She can be shaking with fear, but she still does what she thinks she should do.
Page 72

“I wish we could just hide here and stay out of everything else. I know we can’t, but I wish.… It’s been so good here.”
Page 72

“It means that Change is the one unavoidable, irresistible, ongoing reality of the universe. To us, that makes it the most powerful reality, and just another word for God.”
Page 75

Things won’t get back to what he calls normal. We’ll settle into some new norm someday — for a while.
Page 75

We say education is the most direct pathway to God. For now, it’s enough to say that verse just means that flattering or begging God isn’t useful. Learn what God does. Learn to shape that to your needs. Learn to use it, or at least, learn to adapt to it so that you won’t get squashed by it. That’s useful.”
Page 76

"Praying does work. Praying is a very effective way of talking to yourself, of talking yourself into things, of focusing your attention on whatever it is you want to do. It can give you a feeling of control and help you to stretch yourself beyond what you thought were your limits.”
Page 76

It doesn't, however, call down The Will of God™, nor does it affect anything outside of you. There is no magic juice your prayers affect. All of the changes you see in human society are done by people.

"Once he’s made everyone who isn’t like him sound evil, then he can blame them for problems he knows they didn’t cause. That’s easier than trying to fix the problems.”
Page 77

Human competitiveness and territoriality were often at the root of particularly horrible fashions in oppression. We human beings seem always to have found it comforting to have someone to took down on — a bottom level of fellow creatures who are very vulnerable, but who can somehow be blamed and punished for all or any troubles. We need this lowest class as much as we need equals to team with and to compete against and superiors to look to for direction and help.
Page 80

Life is getting better, but that won’t stop a war if politicians and business people decide it’s to their advantage to have one.
Page 82

We’re becoming more and more isolated as a people. We’re sliding into undirected negative change, and what’s worse, we’re getting used to it. All too often, we shape ourselves and our futures in such stupid ways.
Page 86

“You can’t change everything in your life all at once. You just can’t.”

“I suspect it’s a human characteristic not to know when you’re well off,” I said.

I moved against him, but managed not to say anything. I hate to hear him always talking about dying.
Page 142

But an unpleasant thing should be done quickly if it must be done at all.
Page 149

When she wasn’t sure, she found ways to avoid fighting or go along with her opponents until they tripped themselves up or put themselves in a position for her to trip them up.
Page 154

In small communities, she believed, people are more accountable to one another. Serious misbehavior is harder to get away with, harder even to begin when everyone who sees you knows who you are, where you live, who your family is, and whether you have any business doing what you’re doing.
Page 171

“This is like nothing we’ve faced before.” Bankole’s shoulders slumped, and he sighed. “I don’t know that this country has ever had a leader as bad as Jarret or as bad as Jarret might turn out to be: Keep that in mind."
Page 178

Replace "Jarret" with Cheetoh, and you pretty much have the fictional world realized here and now.

"We need to become the adult species that the Destiny can help us become! If we’re to be anything other than smooth dinosaurs who evolve, specialize, and die, we need the stars. When we have no difficult, long-term purpose to strive toward, we fight each other. We destroy ourselves. We have these chaotic, apocalyptic periods of murderous craziness.”
Page 179

“That’s where faith comes in, I guess. It always comes sooner or later into every belief system."
Page 180

After a moment, I decided I was where I wanted to be. If I had to cry on someone’s shoulders, well, his were big and broad.
Page 182

The younger girls cried and quarreled and complained. The rest of us sat silent most of the time. We had all been through one kind of hell or another. We had all survived enough to know that crying, complaining, and quarreling did no good. We might forget that in time, but not yet.
Page 201

Much blood was shed, but little was accomplished. The war began in anger, bitterness, and envy at nations who appeared to be on their way up just as our country seemed to be on a downward slide.
Page 244